By Clave Jones On May 6, 2016 Last updated May 4, 2016
Share TwitterReddItPinterestFacebookEmailPrint

It’s difficult to think of the Avengers without thinking of Captain America, so Cap has always been seen as a team guy. He probably did really well in elementary school when students were asked to gather into teams or 3 or 4 for a project, or maybe he did a short stint at Google in one of those collaborative working environments where everyone kinda just shares an open working environment. I dunno. 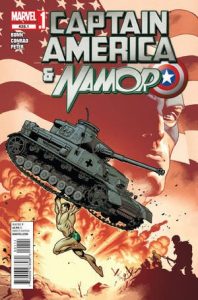 7. Namor, the Sub-Mariner At the top of our list is a team-up with Namor, which is surprising. While Captain America might be known for working well in a team environment, Namor is known more as the lone wolf who rides alone.

Namor is hot-headed, haughty, arrogant, and bent almost fully on self-centered thinking. He’s spent more time being villainous and chasing blondes than he has being a hero in the ilk of Cap.

Yet back when Marvel wasn’t frightened of big numbers, we saw a Captain and Namor team-up in issue 635.1, written by Cullen Bunn.

This team-up story takes readers back to WWII, where Captain America and Namor battle the Thule Society who have just unleashed the Kraken! 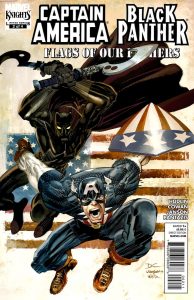 Black Panther In 2010, there was a 4-issue miniseries that saw Captain America and the Black Panther team-up.

I’m not quite certain how the timeline works on that, but I don’t understand the timeline for hardly anything Marvel related, and it’s never enjoyed me from loving me some Marvel comics. Regardless, it’s a great place for fans of the characters to dig a little team-up between the two figureheads for their respective countries. 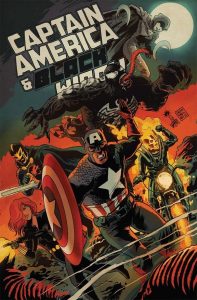 Captain America #636 to #640 isn’t considered one of the best Cap stories, but it does have the world-hopping espionage that Black Widow is famous for. Chased by a superpowered kill squad, Cap and Widow zip around, battling corporate-sponsored war machines, while also facing the requisite super villain or two.

Plus, you have guest stars Hawkeye, Iron Man, and…spoiler warning….Dr. Doom, which is nice. 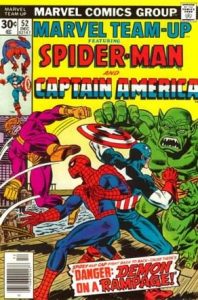 Spider-man Back when comics were fun, Marvel had the long running Marvel Team-up book, which is fair to say, had Spider-man as the centerpiece character, rotating other superheroes around to team up with him.

During the 150 issue run of volume 1 of Marvel Team-up, there were multiple opportunities for Spider-man and Captain America to have a nice little team-up.

Marvel Team-up #52 was my favorite such instance, as the baddie that Spider-man and Captain America were fighting was none other than Batroc the Leaper, who I think we can safely say is everyone’s favorite French villain.

There is also a monster from another dimension, which is nice. The Marvel Unlimited app has most of the Marvel Team-up issues. 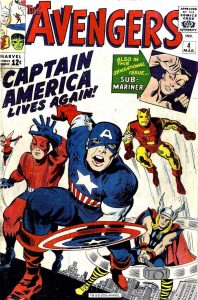 Thor and Iron Man I’m putting the next two together, as it’s really difficult to separate the “Big 3” of the Avengers, Captain America, Iron Man, and Thor.

Just like Superman, Batman, and Wonder Woman over in the DC universe, these three heroes have formed a superhero trinity that has spanned decades.

And despite what Marvel’s Civil War might present, Captain America, Iron Man, and Thor have had such remarkable team-ups because they really do need each other. Each hero brings their own perspective and strengths and that has been what has made the partnership be so enduring throughout hundreds of comic stories. 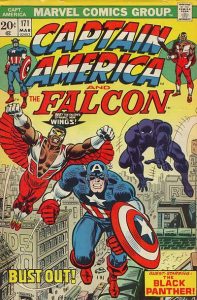 Falcon Captain America’s number 1 superhero hero to team up with is undoubtedly the Falcon, his long time partner.

In the early 2000s, folks might remember a 14-issue series of Captain America and Falcon teaming up, but long-time fans will remember that after Falcon’s 1969 debut, Captain America’s solo series was actually co-billed as Captain America and the Falcon from issues #134–192 and 194–222, skipping only number 193 from some reason that I’m not sure of.

It’s fitting that Sam Wilson wields the shield in today’s comics as Falcon and Cap have adventured together in hundreds of comic stories as a perfect team-up.

There you have it, 7 Captain America Team-up comics. There are more, of course, but I think these represent perhaps the best of the times Captain America has had a hero batting by his side.