Who has Been Captain America Other than Steve Rogers?

By Clave Jones On May 5, 2016 Last updated May 5, 2016
Share TwitterReddItPinterestFacebookEmailPrint

When I watched the trailer for Captain America: Civil war and Iron Man said to Captain America, “Sometimes I just want to punch you in your perfect teeth,” the first thing I thought was that all I want is to see Chris Evans play Steve Rogers until the end of time.

You know, what difference does it make, when we get right down to it? We’re all going to die eventually. And after Marvel is forced to recast the role of Captain America with someone other than Chris Evans, death’s sweet embrace won’t seem so bad.

Who Has Been Captain America Other than Steve Rogers? 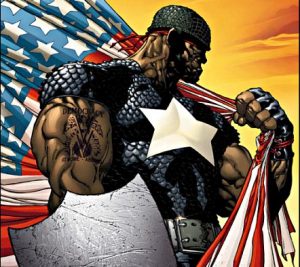 Isaiah Bradley During WWII, the army wanted more super soldiers like Steve Rogers. They forcibly recruited 300 African-Americans and Isaiah Bradley was one of the few to survive the Super Soldier Serum treatment.

Facing an apparent suicide mission to stop the development of the German Super Soldier formula, Isaiah took a Captain America costume and shield with him. His mission was successful. But rather than return home a hero, he was promptly court-martialed and given life in prison for stealing the Captain America costume.

When a tattered Captain America costume was discovered, Steve Rogers was notified and he began a journey to learned the truth about Isaiah Bradley, his comrade from long ago. Isaiah Bradley was a legend who never got the recognition he deserved. 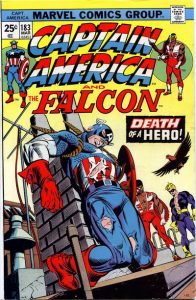 The Falcon began to train Roscoe even as he feared for his safety and hoped that Roscoe would decide to give up the shield on his own. Falcon’s fears were realized when Roscoe was killed by the Red Skull, who was enraged that the Captain America he had killed was not Steve Rogers. 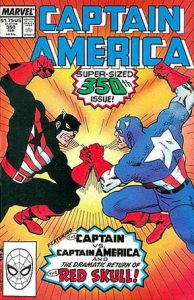 John Walker John Walker never felt he was a hero like his Vietnam veteran older brother was. So Walker became the Super-Patriot, arguing that he stood for America’s ‘true ideals’ and began to publicly speak out against Captain America.

When Captain America abandoned his identity due to Red Skull’s political manipulations, Walker then took the role as Captain America, and brought on two sidekicks, Left-Winger and Right-Winger. It was a little on the nose, don’t you think?

Eventually there was a confrontation with Steve Rogers who was then calling himself the Captain. Walker was deemed unworthy of the Captain America title due to his actions, but he later re-emerged as US Agent.

William Naslund began his career as the Spirit of 76. Written as part of the Crusaders, a WW II-era superhero team, Spirit of 76 patterned on the DC Comics Freedom Fighter member Uncle Sam.

He was killed in action.

William Naslund had no superhuman powers but was a world-class athlete and hand-to-hand combatant. As the Spirit of ’76, he designed and wore a cloak made of an bulletproof material. As Captain America, he carried a steel shield, approximately 2.5 feet in diameter and fashioned by the US government after the design used by the original Captain America. 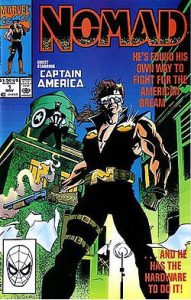 Jack Monroe was born in a town of Nazi sympathizers. His parents were arrested and executed as traitors, and Jack and his sister were placed into foster homes. Later, Jack bean idolizing Captain America’s sidekick so much that he began calling himself Bucky. Jack was taught by William Burnside, who had legally changed his name to Steve Rogers and got plastic surgery to resemble the original Captain America.

Jack tried to convince William to become the new Captain America, even making him a costume. Burnside injected himself with the Super Soldier Serum and gave Jack an injection as well. Believed to be the original Captain America and Bucky, the pair then successfully defeated the Red Skull, but it wasn’t known to the two at the time, but their Super Soldier treatment was incomplete.

Naturally, this ruse wasn’t to last and Jack Monroe spent the bulk of his career as Nomad. The last year of his life was spent frequenting a bar, mentally unstable. He spent many nights attacking innocent people under the delusion he was fighting drug dealers.

Although he technically served as Bucky, the character’s ruse was used for such a significant stretch in the comics (included a comic of his own) that he squeaks unto this list. 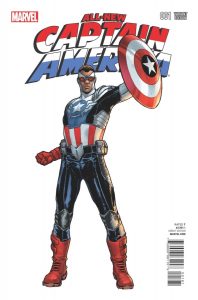 Sam Wilson is currently wielding the shield as Captain America. He grew up in Harlem and his father, a minister, had been killed trying to stop a fight between two rival gangs, and Sam’s grief led him to a life of crime.

Sam used the Cosmic Cube to give himself the ability to telepathically communicate with birds, becoming the Falcon. Captain America was able to free Wilson from the Red Skull’s influence and the Falcon became Cap’s partner for a long time.

With the Super Soldier Serum no longer viable in his body, Steve Rogers gave up being Captain America. Steve gave his legacy to Sam, and he became the All-New Captain America. Ian Zola, a creation from Dimension Z, joined Sam as his partner, under the name of Nomad. 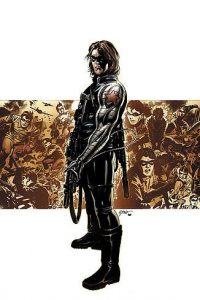 Bucky James Buchanan Barnes was the friend of Steve Rogers, the two of them serving together in WWII. After  intensive training program under Captain America’s tutelage, he received his own costumed identity as Bucky.

While on a mission, Bucky was caught in the blast of an exploding plane and thought to be killed in action. Bucky however was very much alive. He later resurfaced as a Soviet spy, the Winter Soldier.

Later, Barnes was rescued from his descent into violence and insanity. Steve Rogers had a request that his Captain America identity would be passed to a successor. Tony Stark felt the best way to honor his friend’s request was for Barnes to become Captain America, Barnes agreed on the provision that his mind be cleansed of any remaining mental implants.

Although he was reformed, there were still a few who had not all forgotten his past as the Winter Soldier. Barnes decided to give up the Captain America identity in favor of the now-revived Steve Rogers.

So, who Has Been Captain America Other than Steve Rogers? Well, lots of people obviously. But we all know in here [points to heart] that Steve Rogers played by Chris Evans is really the one to wield the shield.