Comic Characters You Should Know: The Black Panther

By Jason Sansbury On Jul 25, 2015 Last updated May 25, 2018
Share TwitterReddItPinterestFacebookEmailPrint

As we look at the upcoming spread of Marvel movies, there are characters that aren’t exactly household names. But we want to make sure that you know about them, because some of them especially are going to be awesome.

Case in point: The Black Panther.

An introduction to the Black Panther

The Black Panther is T’Challa, the king of the African kingdom of Wakanda. (You may remember that Wakanda got a mention in the recent Age of Ultron movie, as being the source of the material that Captain America’s shield was made out of and that the Vision was crafted out of.) 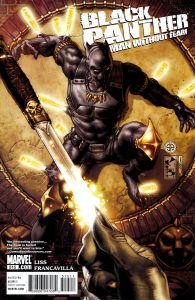 The history of T’Challa is interesting. He was created to be one of the first black superheroes in the midst of the civil rights era in America. His name is likely pulled from the logo of the predecessor to the Black Panther Party, the Lowndes County Freedom Organization. (This interesting tidbit is found in the book Marvel the Untold Story, which we reviewed here.)

The Black Panther rules Wakanda, a country that is a strange mix of ancient ritual and modern technology.  The country is consistently shown to embrace both of those at the same time and it creates a fascinating landscape for the upcoming movie to explore. Wakanda has been able to thrive and succeed by selling off the Vibranium material that is found in the country, often attributed to a long ago crashed meteor.

The name Black Panther is a title bestowed on the leader of Wakanda and with it come the powers. And because he was created in the 1970s, a drug that has to be regularly used is involved.  The Black panther powers essentially create him into a superhuman soldier, with enhanced agility, speed, strength moving him into peak Olympic levels. Additionally, he has some resistance to magic based powers. And because of the nature of the scientific advancements of his country, he is often shown having technology based gadgets, though those things vary widely across his various portrayals depending on the creators.

Where to Find The Black Panther 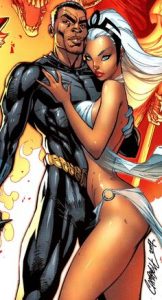 T’Challa is well connected in the Marvel Universe. He first appeared in the Fantastic Four, was a long term member of the Avengers, married Storm from the X-men, and took on the mantle of Daredevil for a while in the Shadowlands saga.  All of which creates some interesting tie-ins for the upcoming movies.

For instance, after the character Black Goliath was killed in the Civil War, Black Panther and then wife were firmly in the Captain America side of the conflict. Will he show up in that movie first, which may serve to turn his movie into more of an on-going saga and less of an origin story?  Personally, I would hate for the richness of Wakanda to be a backdrop that T’Challa leaves too soon.  I think Wakanda would broaden out the Marvel Cinematic Universe is some amazing ways if the story is set there primarily.

If you wanted to learn more about the character the Black Panther, the Marvel Unlimited App has several great runs that are worth pursuing.

How to Make a Glowing Wizard Orb