One of the interesting aspects of having been in the business of making comic books for 70 years is that companies like Marvel and DC have had to deal with how societal values and norms have changed. Aspects of characters’ back stories or history look pretty challenging when held up to the light of 2016. And while this phenomenon is not a new one, it is in one that Marvel Comics in particular has dealt with in some of its most contemporary stories.

[divider] Can there be redemption of Marvel characters with uncomfortable backstories? [/divider] 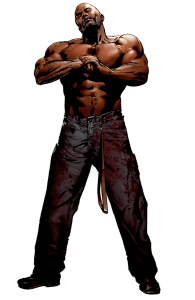 Luke Cage was created in the early 1970s and when you start to do the research, it is hard to find any justification of his creation other than it was a reaction to the blaxploitation movies that had become popular. Marvel wanted to create a character that fit that mold, and a wrongfully imprisoned hero that was given powers through a jailhouse medical experiment gone wrong was created. Luke Cage, Hero for Hire, began.

Later, as neither title could sustain itself, the kung-fu backstoried Iron Fist was paired with Luke Cage in a book that continued to run. While the stories were decent, no one would argue that Luke Cage was advancing much beyond a street tough stereotype.

In the early 2000s, writer Brian Michael Bendis made Luke Cage a side character in his Jessica Jones Alias series and seemingly decides that Luke Cage is a character with a dubious creation history that needs to be redeemed. So, without changing the character’s backstory much, Bendis writes Cage in Alias, then eventually gives him a spot in his New Avengers run that is widely regarded as one of the better Avengers runs. Cage becomes popular with other creators and we see go on to do things like lead the incarcerated Thunderbolts and other teams.

In essence, Bendis took a character that had a dubious cultural beginning and transformed him into something that fits more fully into our modern world. Luke Cage is a tough man from the streets but he is also a hero with a moral compass that guides him just as strong as Steve Rogers’ moral compass guides him.

Without a doubt, if Bendis never develops an affinity for the character, Luke Cage is likely still a character that gets the awkward social glances at the local comic book shop due to his history and how no one really ever advanced him as a character. Instead, Luke Cage has become a key Marvel property, already appearing in the Netflix series Jessica Jones and scheduled to have his own series, as well as be a part of the promised Defenders team that unites Daredevil, Jones, Cage and a still promised Iron Fist.

So, Marvel is now in the process of having a similar reclamation project with one of its characters from the same era who is need of attention, development and growth: the Black Panther. 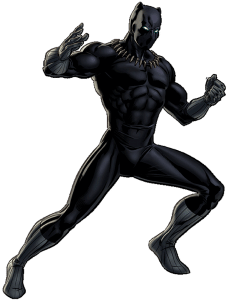 Already slated for a major theatrical release in the Marvel Cinematic Universe, the Black Panther has already been seen in trailers for this summer’s Captain America: Civil War and recently a director was announced. With so much attention being paid to the character in the movie world, the comic book character has strangely been neglected, which is why the announcement of Ta-Nehisi Coates being hired to write a 12 part Black Panther story corresponding to the Captain America movie release is welcome news.

Coates is an African-American journalist, writing for the Atlantic, author of last year’s award winning non-fiction book Between the World to Me and a genuine fan of comics. Marvel now seemed poised to give the Black Panther an authentic African-American voice for the first time since a short-lived Christopher Priest authored run.

Marvel recruited Coates after an interview with Sana Amanat, Marvel’s director of content and character development. Coates had interest in one of Amanat’s biggest success stories: the Muslim-American, New Jersey based Ms. Marvel character. From there, there was mutual interest.

After having read his book, there is no comic I am more excited for than Coates’ Black Panther. He has a genuine chance to revise and update a character who could, regardless of his past, become one of the great Marvel stories of this century.

So, in a form that is going to give us unfortunate backstories, it is also the chance for great new creators to begin a redemption of Marvel characters, to bring new things to characters and the forms, and to continue to tell the stories of the heroes we love and can learn to love!