By Michael Adkins On Jan 19, 2016 Last updated May 31, 2018
Share TwitterReddItPinterestFacebookEmailPrint

Most of my formative years were spent with one thumb on a D-pad or joystick and the other on any number of buttons labelled A, B, X, or Y (and don’t even get me started on bumpers and triggers). I played video games a lot. What little money I had went into systems. At some point in my life I’ve owned nearly every handheld and console available in stores going back to the NES. I haven’t been without a current gen gaming system since 1991.

In all those years, I’ve played who knows how many games.  Some, however, I recall quite fondly and even have a strong hankering for long years after I last pushed start on their menu screens: Super Mario Sunshine, Ninja Gaiden I and II, Ocarina of Time, Metroid Prime, Fable…They’re the cream of the crop. But two other faves are the heartbeat of this particular post: X-men Legends and Marvel Ultimate Alliance.

Hitting the shelves in 2004, the original X-Men Legends is the predecessor of all four games that fall under this nostalgic umbrella.  It was an action RPG that let you compose and control a team of up to four mutants from a list of just over a dozen of Marvel’s biggest mutant names. Combat earned you XP and XP earned you levels which allowed you to upgrade stats and skills. Gear was also a mechanic, but it was blissfully minimal. No ludicrous amount of inventory management; that would distract you from the run-and-gun gameplay. You simply ran into a room, killed anything that moved, broke every piece of furniture, and moved on to the next room.

Your powers were governed by a blue bar of stamina, with each type of attack outside of your 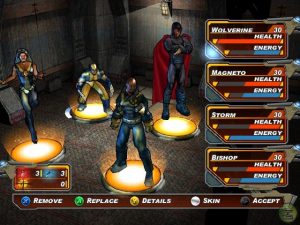 standard punches and kicks eating into it with a cost. If you managed to attack a baddie with one of your abilities in the same moment as another of your allies, you’d hear the oh-so-satisfying shout of “COMBO!” and see who combo’d with you, what the combo was called, and its damage dealt.

It was blissfully simple and simply fun…especially when you unlocked the Xtreme Powers of your characters at level 15. Then you’d wail on baddies until you filled up one of the X icons at the bottom of your screen before unleashing your devastating super attacks.

The game played a lot like Diablo, only you were controlling X-Men instead of warriors and sorcerers. The first one was such a huge hit that it spawned not just an equally awesome sequel, but a superior sequel in X-Men Legends II: Rise of Apocalypse only a year later. The best part:  The plot of the game permitted you to play with some of the more iconic villains, as well! Suddenly the likes of Magneto and Juggernaut were working in conjunction with Wolverine and Nightcrawler. Then came the best next step possible…

The Ultimate Alliance games were almost exactly like the X-Men Legends games, except that the 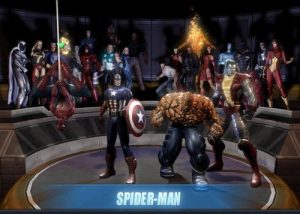 roster of playable characters was not limited to mutants. The first installment of Alliance boasted nearly as many PCs as both Legends games combined (and actually exceeds them with DLC PCs). Your biggest mutants still made the cut, of course; names like Wolverine, Colossus, Storm, and Cyclops. But added into the mix came heroes from other Marvel lines like The Fantastic Four and The Avengers.

And then Ultimate Alliance II came out with a plot tied into Marvel’s Civil War event and put bad guys on the roster once again.  Venom, Carnage, Penance, Green Goblin, and more can join your party and fight for either the Pro-Registration side or the Anti-Registration side.

There wasn’t anything groundbreaking about any of these games. They just permitted me to do the very same things I’d done in games like Gauntlet and Diablo, only with and against the trademarked characters from my favorite lines of comic books. And there is something significant to that. Reading of the exploits of these heroes is one thing…Forging their legends myself with the push of a few buttons is satisfying on a whole new level.

The good news: Ultimate Alliance I and II are available through Xbox Live’s Marketplace.

The bad news: Both sell for $39.99 a piece; a pretty high price for a decade-old game IMO. And X-Men Legends is nowhere to be found on the Marketplace because both debuted on the Xbox and so did not make the “next gen cut.”

Maybe we’ll luck out and Marvel will release another game similar to these in the near future. With their characters garnering unprecedented wide appeal, it seems to me like the iron is as hot as ever for striking.

Weekly Nerd Chat: What Video Games Are You Geeking Out On?