This weekend, Marvel Studios released their recent movie Black Panther and to the astonishment of some in Hollywood, it set record financial records, appearing to close in on a weekend total of $218 million, which is record shattering for the month of February, when movies are generally released with much lower expectations.

From the pure storytelling standpoint, director Ryan Coogler and his team do amazing work. If Black Panther were a standalone movie, it would be quite a feat in storytelling. The story tells the history and past of the African nation of Wakanda, which through the resources of Vibranium, manages to lift itself up out of poverty, but makes the decision to keep those riches private and secret.

Part of the movie’s main tension is whether or not Wakanda should remain an isolationist country or whether it should be engaged in the world. And if Wakanda is going to be engaged in the world, will it be as a mighty military dictatorship or as a humanitarian and peacekeeping organization. The tension devolves into 3 real perspectives and, at times, the audience has sympathy for all of them before it is resolved in the final conflict. The film also juggles the line of being a part of the Marvel Universe but not overly bogged down in it; it offers us hope for what the Marvel movies may look like post-Infinity War and what comes out of that. 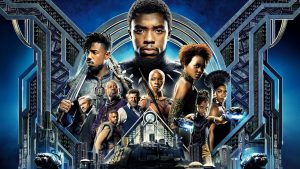 This movie has a stellar cast. Much is being made out of the fact that this film is nearly entirely all people of African descent; it is sad commentary that such a cast is noteworthy. And this is a phenomenal cast, where I am sure actors and actresses took less money to be able to appear in it or Marvel agreed to spend more money than originally planned.

Chadwick Boseman returns at T’Challa, the lead character and keeper of the mantle of Black Panther, the defender of Wakanda. His foe is the charismatic and defiant Eric Killmonger, played by Michael B. Jordan. It should not surprise anyone that Jordan is in this film, as he has been a central part in each of Ryan Cooler’s projects (Fruitvale Station, Creed and now this film).

But beyond that, the cast is rich with worthy performances. Lupita Nyong’o plays the love interest of T’Challa, and serves as the proponent of humanitarian future of Wakanda. Danai Gurira plays Okoye, the leader of the guards sworn to protect Wakanda and its king; it wasn’t until afterwards I realized that she is Michonne from the television series The Walking Dead. And newcomer Winston Duke has a breakout performance as M’Baku, the leader of the tribe that has been even more isolationist than Wakanda has as a whole.

Martin Freeman serves as an able tie to the Marvel Cinematic Universe, providing some humor and laughs and being present but not overwhelming the plot.

With Coogler at the helm and with its stellar cast, this film is unapologetically black and afrofuturist. Obviously, as a white male in my early 40s, there are others more able to speak to this than me but I will say that I am grateful for young children of color to have superheroes that look like them.

Part of what had to be tempting on Marvel’s side was to mandate that Captain America and Winter Soldier show up for the big climatic battle. But I think it was wise to let the ideas, thoughts and discussion largely play out among the characters. Wakanda isn’t a real place and there has been a huge number of idiots on the internet feeling like it is their job to make sure that everyone knows it. But the ideas behind Wakanda are real and I left hopeful for what those ideas may bring forth in the future. Its financial success is startling to some in Hollywood because they haven’t paid attention to the power of black movie going audiences; these records are falling because Hollywood is giving black audiences something to get behind and believe. 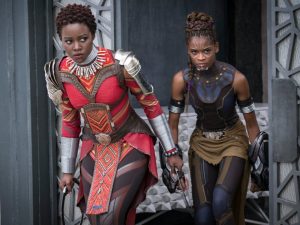 This movie says important things about masculinity, femininity and leadership. T’challa is given the mantle of king and throughout his work in the film, we see him deferring to and trusting in the women around him. His sister is his technological genius, always upgrading and improving his suit. He trusts the female guards around him (the dora milaje) and he defers to the wisdom of his mother. That grace from him is contrasted by the villain, who instead ignores the wisdom of the women around him, even violently assaulting them when they challenge his leadership. It is a clear, prominent line of thinking that Coogler highlights and is well done and needed!

The Score and Soundtrack are Incredible!

Finally, this movie is phenomenal with the use of music. Hiphop artist Kendrick Lamar is prominently featured in the soundtrack and he gives voice to different characters in some of the songs that are used. But even beyond that, Coogler and company work to make the music perfect. It is one things to have a hip hop track for a scene set in 1992 in Oakland. It is quite another to make sure that track is from Bay area artist Too Short.

Without a doubt, Black Panther is a fantastic addition to an already incredible (and still expanding!) Marvel Cinematic Universe.  The pre-release hype was not unwarranted by any metric.  Across the board, Coogler and the cast deliver a film bursting at the seams with action, politics, culture, technology, and identity; all skinned in a superhero veneer that reels you in and arrests your attention for its entire runtime.