Have you ever been in the middle of playing a game and thought or exclaimed aloud,“Who comes up with this stuff?!”  Well, I have!  So I’ve reached out to several game designers to net some interviews to give you a privileged peek behind the game design curtain.

Meet Anthony and Nicole Amato who, along with Jonathan Gilmour, teamed up with IDW Games to bring one of Atari’s IPs to your tabletop:  Centipede.  The classic cabinet game has been translated into  an asymmetrical competitive game with one player controlling the gnome (as usual) and the second controlling – for the first time ever – the descending bugs!

NoE:  Before we get into anything related to the Centipede game you’ve developed with IDW, we’d like a chance to get to know you some!  So what’s your nerd origin story? 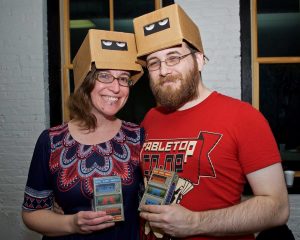 Amatos:  Well, we’ve both been video game nerds pretty much since video games were even a thing. Nicole has been waist-deep in the video game dev community of Philadelphia for years. She’s been writing reviews, running meetups and cons, and doing writing and editing for a few local games. She played D&D and board games when she was younger, but didn’t really get back into either until her late 20s/early 30s.

I’ve been an artist with fantasy/sci-fi leanings since before I can remember, so moving into roleplaying and tabletop war gaming was an easy transition. I think I came to board and card games much later, and when Nicole and I met, we pretty much immediately wanted to try our hands at game design soon after. I mean I personally remember playing Risk and Magic as a kid and hating it. It turned me off and I didn’t look back at what I was missing til after years and years D&D and WhiteWolf started to dry up.

NoE:  IDW seems to be developing a whole series of retro arcade games into tabletop games.  I know Missile Command is in the works along with Joust.  You two have worked on some very 80s feeling and looking games like Lazer Riderz and Resistor_, so Centipede seems right up your alley!  Tell me about some of the challenges or differences you two experienced designing a game based on an existing IP and even gameplay versus creating something from scratch as you did with your previous games.

Amatos:  Creating a game from an IP is certainly an interesting challenge. You have to address all sorts of unique questions. 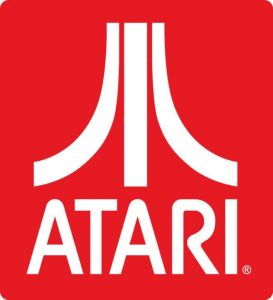 With our own games we can move the constraints and goals when we need to, but with an IP like Centipede, you have less wiggle room. At the end of the day it still has to read and feel like the IP, right? It’s a nostalgia-driven IP to boot so, to our thinking, it has to feel nostalgic as well. Also there are much different timeframes involved, of course.

NoE:  Control of the gnome has always been the mode of play for the Centipede games, but you had to sort out something novel:  Control of the bugs!  You’re blazing new trails there.  How did you two decide to utilize different modes of play (dice vs cards) for the gnome and the bugs?

Amatos:  That was actually one of the design challenges presented to us. We were asked to make it asymmetrical very early on, which only makes sense considering the setup of the video game. We felt that dice best represented the twitchy nature of the old scroll ball controls of the cabinet. A hand of cards we hoped made you feel more like you were the system, with all the options in front of you and rules about how objects worked.

NoE:  You two also incorporated a four player co-op option that pits one gnome and centipede pair against another pair on the same board.  Aside from allowing for more players, what changes from 2-player to 4-player as far as gameplay and even strategy is concerned?

Amatos:  To our minds, the 2-player game is there to represent the feeling of the original arcade game. The centipede is hard to defeat. It’s fun to see how far you can get or how fast you can crush the gnome. The 4-player game is a whole different story, though. I personally treat the 2-player game as more of a training level for playing the 4-player game where things get really crazy. It’s a totally different game. All kinds of interesting strategies pop up when playing 4-player – do I shoot my own centipede to break it in half? Can I set up the board so that my bugs eat the enemy bugs? Is my side’s centipede blocking my shots on the enemy centipede? Is it worth it for me to use all my action cards to shoot the enemy gnome to get my centipede an extra turn? The crossfire and interaction really shine in the 4-player mode. I should also mention that you can totally play the 4- player mode with 2 players – just have each player play both sides of their team. 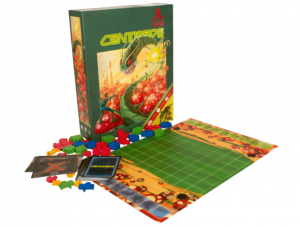 NoE:  What did you two think was the nostalgic heartbeat of the Centipede games and how did you ensure it was incorporated into the tabletop game?

Amatos:  Well, to our thinking, it had to look like the arcade screen, and the centipede had to follow the same movement conventions. We had played with other ideas, like digging through decks of cards, or Shoot Em’ Up style flicking games, but neither really fulfilled those rules. Other things were important as well, of course. Lots of mushrooms, things turn into mushrooms when shot, many different bugs that move in different ways, etc. Basically we lifted as much of the original as we could into the game.

NoE:  If you two could hand pick any other retro game to reimagine as a tabletop game, what would it be?  What kind of game style do you think would serve it best?

Amatos:  I’m fairly certain Nicole would say Marble Madness. For me I think maybe Rampart would be fun, or Paperboy, or Bomberman – or Gauntlet, of course. I would have said Joust, but it looks like we missed our chance at that. I can’t wait to see how they do Joust.

Let’s see, according to Nicole, she would want Marble Madness to be a game where you have to build the levels and then run marbles through them, if that would even be possible. Maybe like that old nightmare Mouse Trap but with card-sized pieces you put together to make the course. Paperboy would have to be a flicking game, Bomberman and Gauntlet would be sort of like tabletop wargames, I imagine. Rampart is an interesting one, I imagine sort of a tile-laying situation with attacking with dice in between.

NoE:  A question just for fun!  Back in 2016 it was announced that a Centipede movie was in the works.  I’ve no clue if that’s still a thing but if it was and you were given a voice in its production as you were with this game, how would you translate the classic video game to the big screen?

Amatos:  You know that awful CG animated movie Gnomeo & Juliet that came out a few years ago? Imagine that, but an action movie like Die Hard. Maybe in the style of Boxtrolls. That would be awesome.

NoE:  You two are the founding members of Cardboard Fortress.  What would you like our readers to know about that endeavor of yours and where else can they find your work?

Amatos:  As you mentioned, our other games are RESISTOR_ by Level 99 Games and Lazer Ryderz by Greater Than Games. We always have lots of ideas in the hopper, so keep your eyes open, or come by our table at UnPub 8. I’ve started doing graphic design in the gaming world, with my most recent project being a game called Ursa Miner, so that has been taking up a lot of my time. Nicole writes for a site called Warp Zoned, and is prepping for an event she’ll be co-organizing later this year called GameLoop Philly.

NoE:  And lastly, what are you two nerding out on right now?

Amatos:  I’m playing lots of Factorio, and Nicole is grinding through a huge backlog of various video games after a million hours of Persona 5. We are both always trying to put a dent in our board game stack of shame, and Nicole has never seen Star Trek, so we’re doing that in order – we just made it to DS9 Season 1, finally!

You can snag a copy of Centipede from IDW Games today!  Be honest:  You probably already sunk the cover price in quarters into the game back in the day!