Is Jessica Jones Marvel’s First Foray into the Horror Genre?

So, last week, Jessica Jones was dropped in typical Netflix fashion with the whole first season becoming available. Halfway through the season, there are some things that make this Marvel series so especially noteworthy.

First, this series goes somewhere they have never been before. Some are going to argue that Jessica Jones is just the next step on the path that Daredevil started the Marvel street universe down. But Daredevil was something different. If Daredevil was classified as a genre piece, it would fall in the noir category.

And Jessica Jones is dark but it is something more sinister: it is a horror movie told over the long haul of a television season. The unique part of the story from anything else the Marvel team has done is the dark, creepy nature that surrounds it. 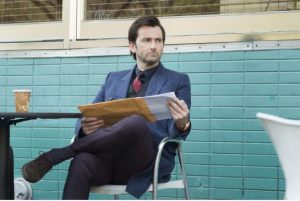 Second, Marvel has its first genuinely terrifying villain. Some may argue the point that Loki or Ultron or Hydra are all truly evil, scary bad guys. But Jessica Jones’ Kilgrave is genuinely a terrifying horror movie level bad guy. Maybe it is the nature of his powers, being able to overwhelm the will of anyone he comes in contact with but how he uses them is equally terrifying. When he sends an 8 year old to be his hypnotic messenger, when he makes parents completely abandon their children, when he makes children sit in a closet, even urinating on themselves, there is something frightening in a way that no one else has been.

Loki had the air of mischief, Ultron was just a bad science experiment gone sentient, Kingpin was a bad man whose back story made him sympathetic. Kilgrave is what happens when our darkness overcomes us and runs amok.

Third, the series is cast really well. When Krysten Ritter was announced as the lead, I was dramatically unimpressed. Having never watched her in Breaking Bad, all I knew her from vaguely was a bad ABC comedy. But she owns this role in ways that are dramatic.

The show owes something to the oft neglected and forgotten Veronica Mars, which was one of the best shows on television during the 3 years it aired that no one watched. Certainly the PI backstory and the iconic hoodies add to it but there is also the sense of humor that shines through.

All of the pieces fit together well but Ritter owns the story and the bulk of the acting is placed fully on her shoulders. And David Tennant brings breath and life to the scariest character on television in years. 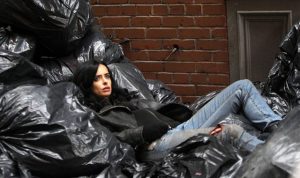 Fourth, the tie-ins to the Marvel Cinematic Universe are inconsequential but dramatic. The best case for why Captain America Civil War is going to happen is made in episode 4 of the show. It shows exactly what and how with a character who is never going to suit up for either side. It is a powerful story and a great reminder of how ordinary people might act when their world is turned upside down with frighteningly powered individuals.

Fifth, it is very adult and I don’t mean just the sex scenes, which feel a little too “Look! We aren’t bound by PG13 rules.” The source material has the same issue and neither are kid friendly. If Daredevil was PG13, Jessica Jones is a hard R. It doesn’t harm the story but it also hasn’t added much to the story either. It feels like it is just there to titillate and it doesn’t quite manage to do much more with it thus far.

Jessica Jones is definitely worth checking out. It reminds us that storytelling and especially dark storytelling can always be appreciated when they are done well. I am hopeful to see how the rest of the season goes and see what other motifs and pieces they continue to build into what has been a spectacular first half of the first season for me.

Review of the Sword Coast Adventurer’s Guide, the Latest Book for D&D 5e