Who are the strong female characters in pop culture from 2015?

Jason (Co-founder of Nerds on Earth and late to the chat): Sorry, ladies. I got distracted by the end of Winter Soldier. So let’s get the conversation going: Who are the strong female characters in pop culture?

Jennifer (Furiosa x2): Of all time or this year?

Jason: Let’s talk about 2015. I mean this has been a banner year of strong choices!

Morgan (Has cosplayed them all): This is going to be tough for sure. I love so many.

Jennifer: I’m gonna have to say Furiosa for mine. I mean, I did cosplay as her.

Jason: What makes Furiosa so compelling for you? 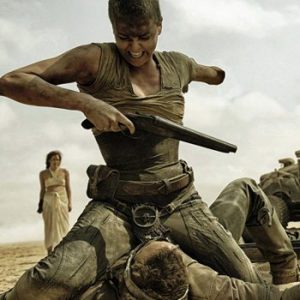 Jennifer: She was in a crappy situation and she got out. She decided, on her own, to help the wives escape and leave. She just up and left. Annnnnnd she can kick butt with the best of them!!

She had drive, determination, and spunk.

Jason: Without a doubt, she is the star of that movie. Any time someone makes the major character into the supporting one, there is something awesome about her.

Morgan: I really like that she didn’t have the damsel in distress thing going for her either. Like honestly she could have probably gotten to her goal without Max, but she used Max as just a bit of an edge for her.

Jason: I think what you touched on, her determination, is part of what makes for strong female leads.

Jennifer: Max was her moral support, I think. Someone to help with The Wives.

Morgan: And determination, bravery, and strength is definitely what I say in Rey with Force Awakens.

Jennifer: Yes, Rey is definitely up there.

Jason: And I think part of what works is that we see her through Max’s eyes in a way: we come respect her along the path as he grows in his admiration of her.

Rey surprised me in all the best ways. Having gone through all the promotion without seeing anything other than a casting picture, I had no idea she would be one of the two leads.

And they pointedly did away with the damsel in distress thing from the get go. Her calling out Finn for grabbing her hand was funny and it made a point: they are at least co-equals.

Jennifer: Oh my gosh, that was great.

Morgan: I was so excited. I wasn’t sure who would be the hero in all this, so when I saw Rey coming out on top, I got emotional. That representation of a young female character defeating all odds is inspiring.

Jennifer: Seeing little girls’ faces light up at her fighting with the lightsaber….

Jason: And they just continued to grow in admiration of her. When she saves the Falcon and not long after when Han offers her a job: that is huge. As he said to Chewie – it is his home and he was trusting her with it.

Morgan: I’ve been seeing so many little girls dress up as Rey, and it makes me go, “wow, I wish there was a character like Rey on the big screen when I was little.” 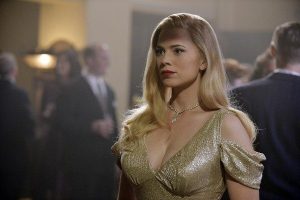 Jennifer: Same. Leia is pretty amazing in the original trilogy but Rey is on a whole new level.

Jason: The limited criticism has been really dumbfounded to me. What isn’t to like about Rey? Without a doubt, I am excited to see where her story goes from here and it feels like it may be one of the anchors of this trilogy.

Jennifer: I agree. It is her story.

Morgan: People say she’s too perfect. But these people are the ones who also saw that Luke was pretty perfect and had no qualms. I think it’s just people are going to need to get use to the fact that female characters are strong with great story. 2015 is showing that that is finally the future for media.

Jason: Without a doubt, strong women characters in two of the blockbusters this year at the movies. But I also think we have three amazing characters to talk about from television this year: each different but each a powerful woman. Carol from the Walking Dead, Peggy Carter, and Jessica Jones.

Morgan: Oh my gosh yes. I love Jessica Jones so much.

Jennifer: And Jessica! And Carol! You can’t go wrong with those three!

Jason: Peggy Carter was my unexpected love this year. I thought it would be okay but I think it caught me off guard. By putting it in a different time, it was really able to make some string cultural commentary. For instance, Jarvis and her relationship. It echoes Finn and Rey – both doing their own thing.

Jennifer: Agreed! She and Jarvis are adorable. And Peggy has style and class while she’s kicking butt and taking names.

Jason: For me, Carol is storytelling done right. Go back and watch her in season one: so broken, so shy, so not in control. To watch her now, it is pretty astonishing. What was your favorite Carol moment this year?

Jennifer: I’m not caught up on TWD. Don’t hate me.

Morgan: There are two types of strong women characters I love to see depicted. Prissy, but can still kill you, and rough and tough but still so caring and willing help however she can.

Jason: No problem, Jennifer. My recaps are ready when you are.

So which category would you put Jessica Jones into? 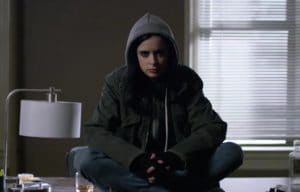 Morgan: Jessica is in the rough and tough, but helps any way she can.

Jennifer: Jessica is in the tortured category. And I love female characters with imperfect pasts.

Jason: Her brokenness is so prevalent but also she hides it away. She is really interesting from that standpoint. She isn’t written by Joss Whedon but she is the match to his archetype: strong but burdened.

Morgan: She’s depicted so realistically to me. Like watching her, I related to her a lot. She was imperfect, in all the greatest ways.

Jason: So, how about this to close: who is a strong female character that you wish more people knew about? Any format.

Jennifer: That’s a tough one.

Morgan: Uhmm, I wish people knew about Jessica Jones because she is a Netflix original so maybe not as accessible. Whereas everyone knows how powerful Rey and Furiosa are (I hope).

Jennifer: Mine is someone we didn’t mention: Lara Croft from the rebooted Tomb Raider games. She’s new, scared, but determined to find the truth. She isn’t just sex appeal like she was in the 90s. I need more.

Jason: I’ve had time to think so here is mine: Tara Chace from Greg Rucka Queen and Country comics and novels. A rougher around the edges female British spy who would kick Bond’s pretty boy tail. How no one has made a mint turning her into a TV or movie star is beyond me.

Thanks for the chat. Here’s to even more awesome, strong female characters that all us nerds can love!

Recap And Review Of The Mandalorian, S2E4: Chapter Twelve,…