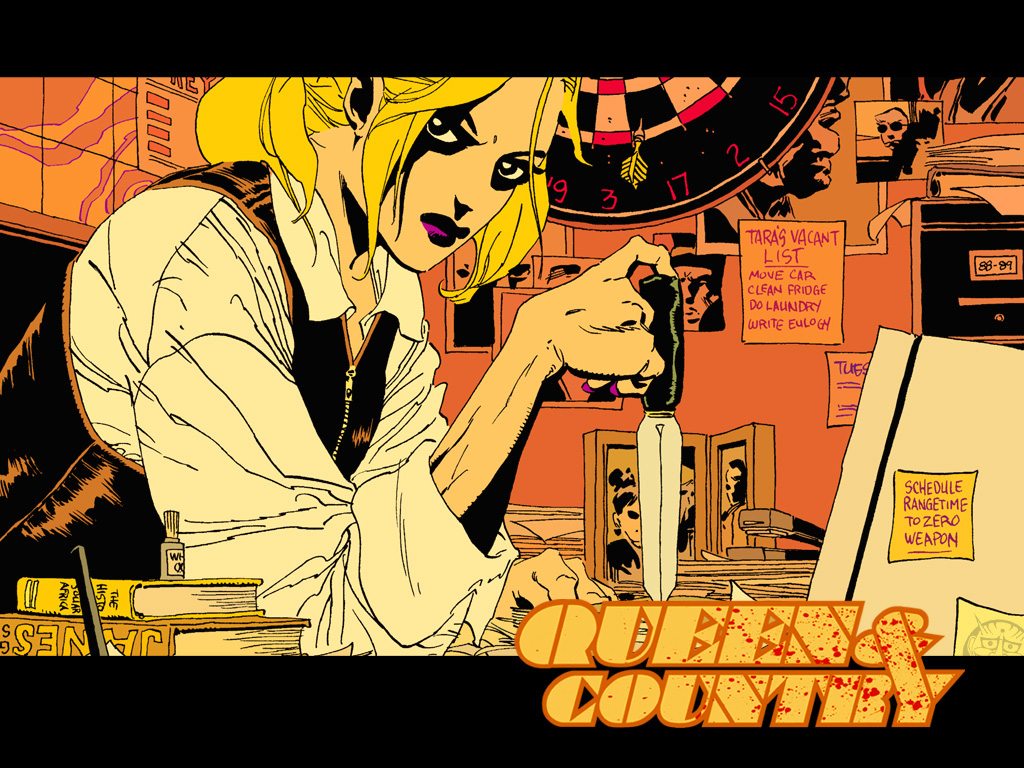 Them: “Ugh. I am so not into superheroes.”

Me: Banging head against the wall.

Most people make the error of thinking that comic books or graphic novels only tell the stories of Superman and Spiderman.  And while obviously, there is a deep rich history of that, the truth is that the form of pictures and words can tell a wide variety of stories.

All of which brings us today to one of my recommendations to people who aren’t into superheroes.

Greg Rucka’s Queen and Country comic series are available in some awesome collected definitive volumes from Oni Press.  The story of Queen and Country is a fairly simple concept to jump into.  It tells the story of the female protagonist Tara Chace as she works in the office of SIS as a member of the British Special Operations Section.

To give you the elevator pitch: a female James Bond with less refinement and more swagger.  Bond drinks martinis; Chace drinks it from the bottle.

The series ran from March 2001 to August 2007 in small story arcs of just a few issues.  In those arcs, you learn more about Chace and her job as a Minder, follow their various operations as well as flashbacks to previous operations carried out by her or the other characters around her, giving deeper insight into the characters and their stories.

As Brian praised Rucka in last week’s piece on Lazarus (for my money the best comic out right now), he is a very good capable writer.  If you follow him on twitter, you see how he shares the research he does and eventually how it shows itself in the comics he writes.

The interesting thing about Queen and Country is how the work began before 9-11 and concluded after it.  It is a fascinating lens through which to read the series, seeing how the whole world of espionage and intrigue is dealt with differently before and after those events..

Rucka also has a knack for writing strong female characters.  Tara Chace is one of the best, along with his lead in Lazarus, the story in the graphic novel Whiteout and his highly praised work in Batwoman.

When reading Chace for the first time, you are instantly drawn into her and her exploits.  She is one of the best developed characters in my opinion and Rucka manages to paint her in just 32 issues.  And it should be noted that a variety of great artists drew for the series but all used black and white images to tell the story.  It is a unique format that really works for these stories especially well.

Secondarily, if you love the story of Chace, Rucka also continued to write about her in three non-graphic novels named A Gentlemen’s Game, Private Wars and The Last Run.  I am currently working through them and find Rucka to be just as great a writer of novels as I do his work in comics.

Lastly, when I finished the Queen and Country graphic novels, one of my first thoughts was “How has no one brought this to screen yet?”  As it turns out, a Queen and Country film is in the development process, currently with Ellen Page attached to play the lead character of Chace and a director announced in March of this year.  If it does ever make it to screens, I hope it as fulfilling as I found the graphic novels and novels to be.

So check out Queen and Country. I can’t recommend it highly enough, especially if you are into espionage and spy stories and haven’t tried out graphic novels in that genre.