In a storyline that would never get approved today, in the Chris Claremont era of the X-Men, a young Kitty Pryde became smitten with the hunky muscular Russian hero Colossus and over time that relationship has developed, with a series of ebbs and flows.

It first fell apart because Peter cheated on Kitty when all the heroes and villains of the Marvel Universe were taken by the Beyonder to the Battleworld of the original Secret World series. (To be fair, Peter was healed by an alien whose powers seemed to heal the body and cast a spell of love over you at the same time.) Ultimately, Kitty left Peter when he kept being willing to sacrifice himself to save others. In fact, he was thought dead in just such a circumstance when he sacrificed himself to seed out the cure for the Legacy Virus that was killing many.

When Joss Whedon began the series Astonishing X-Men, we discovered that Colossus was not dead when Kitty finds him buried deep in a complex. Their reunion is a magical one, and you get a variety of great moments with them in the series. But because Whedon is Whedon, Kitty has to sacrifice herself to save everyone and drifts deep into space.

Since then, there have been a variety of changes and situations but last week, Marvel announced that Kitty Pryde and Peter Rasputin will be married in the pages of X-Men: Gold #30 in June, continuing a long list of amazing, Marvel-ous weddings. 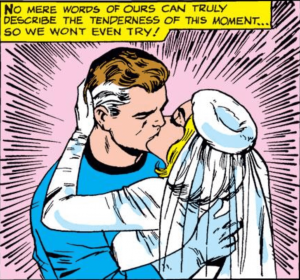 First up, if you want to have a wedding that every Marvel character is going to attend, it had to take place in the pages of the comic that is, at its core, about family: the Fantastic Four. In Fantastic Four Annual #3, uber scientist Reed Richards marries the love of his life Sue Storm while Doctor Doom tries to ruin it. It created some fun dynamics for the early Marvel universe, as we got to see heroes fight villains that were normally someone else’s foe. This one was the first of the Marvel titles and it set up some ideas that we definitely see revisited in the later weddings in the Marvel Universe. 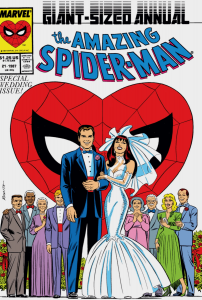 So, this next one…it never happened. Allegedly. In the notorious storyline Spider-Man: One More Day, the marriage of Peter Parker and Mary Jane Watson is undone. But before that happened, Marvel threw one heck of a wedding in The Amazing Spider-Man Annual #21, which also crossed over with the Spider-Man comic strip that was appearing in newspapers as well. At the time, it really did mark Marvel’s willingness to allow characters to grow older, albeit slowly. Today, many fans are extremely disappointed with the outcome of the One More Day plot line and when Marvel announced a wedding for 2018, many of us were hoping to see this one revisited and one of the worse retcons of all time to be undone. 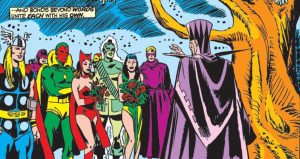 If you want a wedding that may have future implications in the Marvel Cinematic Universe, you should look no further than Giant-Size Avengers #4. There we see the stunning wedding of the android Vision with the mutant Scarlet Witch. It came during a time of the Avengers that is just full of wacky plots and ideas and this one is included. This wedded duo will have LOTS of impact across the Marvel universe for literally decades to come, especially as Wanda’s powers let some crazy things happen, like her having children and wiping out mutants from existence. 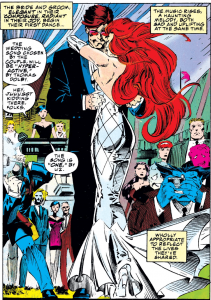 And, speaking of mutants, for the longest time the biggest “Will they or won’t they?” of the Marvel Universe was Scott Summers and Jean Grey. Were Cyclops and Marvel Girl destined to be apart forever? Especially at the end of the Dark Phoenix Saga, it looked like they were. But with Grey’s return, the launch of X-Factor and coming to terms with it all, we wind up with a spectacular wedding in X-Men #30. It is spectacular for its 1990s style but it also has a couple of touching moments, like Wolverine, who is thought to be absent but is really protecting the wedding from the approaching bad guys, which had become a Marvel wedding trope by this time, and Jean Grey telekinetically “dancing” with Professor Xavier for the final dance of the evening and Scott and Jean’s dance to U2.

So, what will Kitty and Colossus’ wedding hold? Who knows! But it will join a long running pantheon of mighty Marvel marriages. (At least until Mephisto shows up.)

3 Nerdy Charities to Consider in 2018

Comic Characters You Should Know: The Sinister Six