When you are 13 and you are making the jump from being nerdy to an all-in, epic nerdiness, one of the new experiences that you try is role playing games.  For me, growing up as a kid in the late 80s and early 90s, that meant that there was a wealth of options available to me.  In some ways, this was a zenith of role playing game popularity. 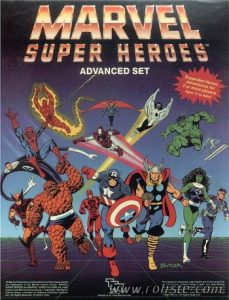 Among my options included:

But my best love of that era has to be the Marvel Superheroes Role Playing Game.  Though they originally published a set in 1984, my friends and I played the 1986 edition.  And for nerdy comic book fans, this game was excellent.  It had an easy to understand game mechanic.  It was nearly impossible to cheat in and you could create characters you wanted or play characters you loved.  And it had a simplicity that the competitor DC system lacked.

Characters are built on these attributes: Fighting, Agility, Strength, Endurance, Reason, Intuition and Psyche.  On the character sheet, you list those down one side, which creates the acronym FASERIP. The first four are all tests of physical attributes and the last 3 mental.  Throw in Karma (experience points), resources and popularity and you round out your characters.  (There is a whole psychological examination to be done about nerdy kids playing a game that has built into its dynamics a desire to achieve popularity.)

For the most part, the game was simple.  You have different skills, powers, etc. You have a 1-100% chance to make that feat and you roll dice to achieve it.  It came with a handy chart to make it all happen.  Add into the idea of battling characters from the Marvel world, and it was probably the best RPG for me and my friends.  (Though if this list of characters had been readily accessible to us back then, half the fun of the game would be lost.  We’d spend hours arguing over who was stronger, etc. until we could either buy the expansion module or they would publish the character in Dragon magazine.)

FASERIP: Making Your Own Character

Making a character was a simple guided process that was a lot of fun. I could roll randomly and wind up with an odd mix of powers or craft my own creation. There was something cool about being able to make a character that you wanted to see. Add to that a copy of a generic looking hero from the Official Handbook of the Marvel Universe and you could design your character and be ready to suit up and play.  (My best creation was a guy who had fire powers with his left hand, water powers with his right hand, the ability to control water and the power of density manipulation.  I think I called him Elemental.) 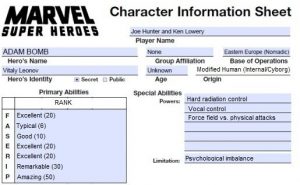 But additionally, it was also a game my little brother could play with us.  He is 4 years younger than me, so trying to help him navigate the complexities of building a car or the numerous complicated formulas of other systems would just frustrate me.  But the Marvel RPG was simple enough that he could easily play with us.  He could play with his beloved Power Pack or we could create new characters just for him.  And when you are a couple of latchkey kids, that is an awesome way to spend time together and not scream and yell all the time.

To this day, we both get nostalgic for game and will simply text each other “FASERIP” occasionally. It is a reminder of some of our nerd nostalgia and the fun we had being super heroes.

Are you a Dungeons & Dragons Newbie? Well, the New Starter Set Might Just Get You Hooked!