I sat down to write a post listing the 7 most dastardly X-Men villains and somewhere in that I made of list of 7 villiainous teams that have battled the X-Men. This isn’t surprising as I’ll often get up and walk to another room, only to have forgotten why I walked in there.

Now what was I talking about?

Oh, yeah. 7 wickedly cruel teams who have battled the X-Men in their long and illustrious history. Warning, this list gets a little fuzzy.

For example, some of my favorite moments have been when the X-Men have battled the Four Horsemen of Apocalypse.  But are they a villainous team? No, not really. They’re henchmen. And without Apocalypse their interactions with the X-Men are gone. But there are others on this list that blur some lines. What can you do?

Without further adieu, here are my top 7 teams who have fought the X-Men over the years: 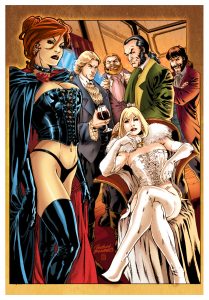 Shrouded in secrecy, the Hellfire Club was established as an elite gentleman’s club and felt the X-Men got in their way of mutant world domination.

Lavish, decadent, and manipulative, the Hellfire Club’s Inner Circle has a very memorable organizational structure: a Black King and a Black Queen, a White Bishop and a Black Bishop (or some membership along that general structure).

Notable members included Sebastian Shaw (played by Kevin Bacon in the movies, hereby serving as my contribution to any and all Kevin Bacon-related memes or games) and Emma Frost, the former White Queen. Of course, the most notable member was a brief appearance as Dark Phoenix as the Black Queen.

They also had a school of young mutant students, the Hellions, who were led by Emma Frost and had frequent run-ins with the New Mutants.

Any Browncoat will tell you who the scariest Reavers are, but the Reavers from Marvel comics are formidable in their own right. 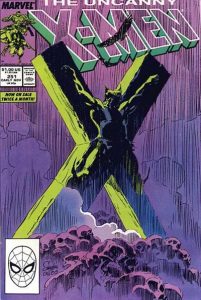 Lead by Donald Pierce and often utilizing Lady Deathstrike as field commander, the Reavers were cyborgs dedicated to the destruction of the X-Men because they are mutants which, incidentally, is important as the entire conceit of the X-Men comics is that everyone wants to destroy them.

Created by Chris Claremont (as all the best X-Men characters were!), the Reavers struck first during the X-Men’s Australia years. One of the more memorable storylines was the capture and torture of Wolverine, who only escaped the Reavers with the aid of Jubilee.

It’s no coincidence that the Purifiers are directly after the Reavers on this list as these two villainous X-Men foes had membership and leadership that were often fungible with one another.

Another creation of Chris Claremont, the Purifiers first appeared in the 1982 graphic novel X-Men: God Loves, Man Kills, and boy, was it a doozy! Led by the Reverend William Stryker, a ruthless fundamentalist Christian, the Purifiers saw themselves in a holy war against mutants, whom they believe to be the children of the Devil and worthy of extermination.

In his frequent run-ins with the X-Men, Stryker and his zealous religious army has utilized the Weapon X program, Nimrod, Bastion, and team-ups with pretty much every other zealot who has hated the X-Men. As a ramp-up to the Second Coming storyline, the Purifiers (under the direction of Bastian) once used a brainwashed Wolfsbane to rip the wings off of Angel.

Luckily for the continuation of the comics, the Purifiers have never been successful in their genocide of mutants.

This name has been used by an assortment of general mutant terrorists, but they are best remembered as Magneto’s flunkies. They debuted back in X-Men #4 so the Brotherhood has a ridiculously long history and a notable cast of characters.

Of course, there was Quicksilver and the Scarlet Witch as original members, who were joined by Blob and Toad. Other members have included Sabertooth, Mystique, Destiny, Pyro, and Avalanche.

Many were recruited to work for the government as the ill-fated Freedom Force,  but whatever their title or lineup they’ve never been a match for our mutant heroes, even though they’ve had dozens of run-ins with the various X-Men teams.

Apologies to all the fictional characters who lost their lives in 1986’s “Mutant Massacre“, but HOT DANGED if that wasn’t a fantastically gripping comic storyline. 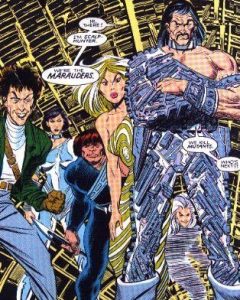 Employed by Mister Sinister, the Marauders had the evil purpose of murdering the Morlocks, a group of unsightly mutants who dwelled in the sewer system of New York City. Boasting Riptide, Prism, Vertigo, Harpoon, Scalphunter, and Sabertooth, the Marauders tallied a long list of mutant casualties.

Later efforts to return the Marauders to the comics weren’t nearly as satisfying, but the impact of their mid-80s appearance is more than enough to give them a place on the list of most villainous x-Men foes.

I warned you this list could get a little fuzzy and the proof is that the Brood aren’t a villainous team, they are an insatiably voracious alien race, intent on not just destroying the X-Men, but eating them or implanting them with their creepy little alien babies.

The BROOD is a race of creatures that could most definitely be seen as an Alien rip-off, but they have also been one of the X-Men’s deadliest foes.

The X-Men encountered the Brood on their first trip to space (because, you know, comics) and they came to learn that the Brood reproduce by taking over the body of an unwilling host and for one prominent storyline the Brood had their eyes set on Rogue. You can’t trust an alien race like that.

Apologies to the Mutant Liberation Front, the Hellions, the Alliance of Evil, the Children of the Vault, and the Demons of Limbo for just missing the cut, but the final spot of this list goes to the Acolytes, who first appeared in 1991’s X-Men col. 2 #1.

The Acolytes were a chip off Magneto’s block, following his principles of mutant domination. In fact, the often used his Asteroid M as a base of operations.

A classic storyline had the Acolytes kidnap Moira MacTaggert, only to have her later rescued by the X-Men.

When Genosha was destroyed along with millions of its mutant population, most of the Acolytes remained unaccounted for, only to later show up to be alive.