Let’s talk about two great new Monastic traditions for monks that are included in the downloadable Xanathar’s Lost Notes to Everything. Now…on to the Monks!

I stinkin’ love the new Monk Traditions offered up in Xanathar’s Notes. It’s kinda weird because I don’t love them for their capabilities exclusively so much as for the incredible flavor they bring to the table.

I feel like they were designed with narrative in mind more than combat, and I totally dig that.

Monks who take on this tradition at 3rd level “seek to absolve themselves for their past transgressions, sins, and current indiscretions” through–you guessed it–atonement. 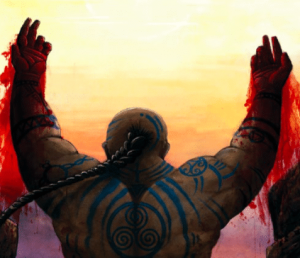 You receive a pool of d8s equal to your Monk level that you can spend to empower attacks you make with your penance (a bonded club).

But here’s the fun bit: When it comes time for a rest, you have to roll the number of Atonement dice you used against enemies against yourself to atone–and this is after any healing benefits gained from your rest.

Atonement is meant to be costly. It wouldn’t be atonement if you were just mopey. Atonement is a mechanic inherent to this class that I think is really neat. It reminds me appropriately enough of Marvel’s Penance. Or these guys from Monty Python’s Quest for the Holy Grail.

The player would need to work hard at keeping their monk from being an emo wet blanket in both roleplaying and combat, but with some effort they’d have a really interesting angle from which to develop their monk.

My only real question for this particular tradition is, What happens if your character comes to feel as if he or she has properly atoned? Can they change traditions somehow? I get that “current indiscretions” could be taken to mean that while they might atone for past sins they’ll never escape ongoing sins. Maybe you just retire the character at that point.

Or return to being Speedball.

This tradition is super intriguing to me. You’re given two neat abilities:

This is a super odd set of skills and it piques my curiosity. I want to spend some time sorting out the most advantageous uses of the Empathic Bond particularly. If you have any ideas on when it might be super useful, let me know in the comments in our Character Sheets Facebook Group!

This monk has a very substitutionary-atonement vibe to him. How would he or she explain this to the other PCs? Is your Empathic Monk a masochist? Does she have a savior complex?

Will These Two Monks Play Nice Together?

If an Empathy Monk tries to spare the Atonement Monk from some of his post-rest damage, will the Atonement Monk resent that? Will it be a Della-using-demon’s-blood-on-Sir-Will kinda thing (if you don’t get that reference, you need to be listening to the Glass Cannon Podcast)?

There are a lot of classes and subclasses I want to play for purely combat purposes, but these two I want to play for roleplaying purposes; to tell their weird and intriguing stories. I’d particularly love to play one in a party featuring both! Would they be like oil and water, or like peanut butter and chocolate?

I initially set out to do a full review of Xanathar’s Lost Notes to Everything, but I switched gears for two reasons:

But here are a couple things neat things to note about the Notes:

Let me know your thoughts in the Facebook comments!  Also let us know what you thought about Xanathar’s Notes to Everything Else.

Behold! A Review of Xanathar’s Guide to Everything,…

Ninja Tortles? Yes, please! A New Supplement Allows Us to…