Mobile gaming has changed a lot for me over the years. I had the original Gameboy, the Pocket, the Color, the Advanced, the SP. Then I graduated to the DS, then the 3DS, then the 3DS XL.

While I still own the very sweet Majora’s Mask 3DS XL and a Nintendo Switch, I find myself rarely taking them with me unless I’m on some sort of trip. If I’m just out and about in the course of my normal day, my go to gaming device is my iPhone.

And my mobile game of choice? Idle Clickers.

I really don’t know exactly what the first one I played was. Perhaps Cookie Clicker on my PC? I also don’t know how I went from thinking they were dumb to literally having to install EVERY one I see onto my phone to at least try it out. All I know is that one day I had several pages of clicker games on my phone and I wasn’t entirely sure how they all got there.

If you aren’t familiar with the genre, let me give you some background as it’s a relatively simple formula. You normally control a thing–maybe it’s a person with a sword, maybe a ship shooting lasers, either way you will be faced with reasons to tap.

Maybe there are waves of enemies coming at you or perhaps one enemy at a time stands in front of you while you wail on it with taps. Maybe you just earn money from tapping. In any case, you will earn some sort of currency from tapping that will allow you to increase your tapping efficiency.

Eventually more money will allow you to buy things that will even earn you money while you aren’t tapping and essentially the game plays itself then, though you can speed up by–you guessed it–tapping.  At some point you will be able to start over based on how far you have progressed with perks that stay with you like extra damage or more money per tap, etc.

So why is this my favorite type of game? The easy answer is that I am weak and the worst type of gamer. But seriously, these games call to me and for the longest time it annoyed me, but I think if I really looked at the ones that have stood out I might just be able to make some sense of it. 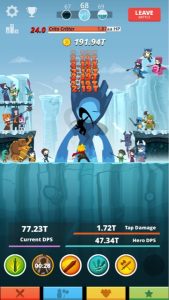 One of my first clicker games on the iPhone. It’s a great one to whet your whistle on, especially if you are a fan of RPGs. There’s a lot here that scratches lots of itches for me. Plenty of stuff to unlock like costumes and weapons.

I love the little party you build up of auto adventurers who fight with or for you according to how you play. The level progression moves just fast enough to make you feel like you are going somewhere but not too fast that you can’t look away from it from time to time.

My beef with this one is really that the unlockables can feel a little too far away with most of them being unlocked with gems (the droppable but also purchasable in-game currency). If you aren’t going to put money into it, it can take a long time to get any and thus can take a long time to see your character model change. And, honestly, since constant progression and change is the name of the game, this one fell out of my rotation pretty quickly. 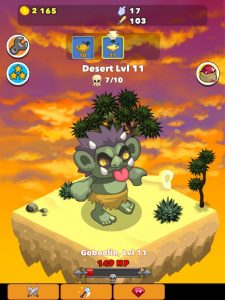 This to me is a better version of the idea than the one before it. Very RPG like and the prestige system of totems is really nice. The adventurers you buy are really fun looking and learning which ones to level up to achieve certain goals is pretty fun.

The art style calls back to the flash games I used to play and I think that’s what keeps me coming back for more from time to time on this one. 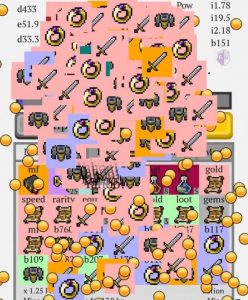 This one isn’t really even a clicker but it scratches one itch and really only one itch. Loot grind.

This game “adventures” for you and drops loot which you decide to equip or sell. It’s not pretty and some of the mechanics are a little confusing. But that endorphin rush of getting a good drop from a boss is able to be had with little to no effort.

I’m not going to defend loving this game but I do love it. 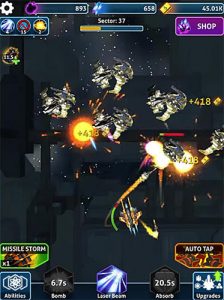 What if Galaga met a clicker game? But also had some anime vibes? That’s this game.

It’s the newest in my rotation and I am in love with it. Clicking is still relevant whereas in some games you hit a point where it’s not needed. The powerups load fast enough to be used a lot giving that rush of power when a boss comes up. Graphics are crisp and the action is fast paced and fun. The prestige modes allow you to earn a currency you spend on upgrades you want which really allows you to play your way. Get this game. Do it now and enjoy.

Join me, nerds, in the clicker world! You’re busy folks so let your games progress while you work and then come back to reap the rewards.

Also, not for nothing, but these types of games are PERFECT for going home for Christmas and killing time.