A friend of mine texted me shortly after he received his copy of The Sword Coast Adventurer’s Guide in the mail from Amazon. After browsing the new options and variants, he lets me know, and I quote:

Before the utterance of this magical phrase, I hadn’t really given any thought to playing a monk myself (although I did build a ninja monk for a friend).  But now…now it was time to monk it up.  He had spoken the magical words; incidentally tying together a long-time favorite and a new passion.

Much to his chagrin, he’s now having to put up with me talking about my Way of the Sun Soul Monk who is aptly named Krillin.

Before we get to the build itself: Meet Krillin. 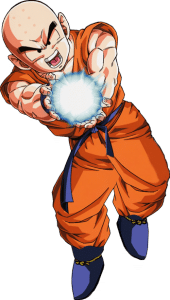 but mighty. He makes the perfect prototype for my Way of the Sun Soul monk for a couple of reasons:

Casting your RPG characters can be helpful in a number of ways, so starting with the anime character as my template, I worked backwards to determine his race, class, and characteristics.

He had to be a monk in order to have access to the features of Way of the Sun Soul (which I will cover shortly). But Krillin was also canonically a monk at Orin Temple. Even the dots on his forehead suggest a monk as they are similar to the marks left on the foreheads of shaolin monks who have undergone the now-outlawed jieba ceremony in which “sticks of incense are affixed on the top of the head…[and] then allowed to burn until the skin of the scalp is singed completely black.”[1]

When it came to picking Krillin’s race, I went with halfling for two reasons:

I even combed through the pantheon of gods and selected Torm based on his ideals as I believe they fit Krillin really well.

In Dragon Ball Z, the characters are able to manipulate their ki to various effects; most notably channeling it into ranged attacks. And that is exactly what Way of the Sun Soul permits! Ki manipulation is the name of the game and gives you all kinds of sweet options as you level.

When you choose Way of the Sun Soul at 3rd level, you gain the following features in additional to the usual monk fare:

Radiant Sun Bolt
Starting when you choose this tradition at 3rd level, you can hurl searing bolts of magical radiance. You gain a ranged spell attack you can use with the Attack action. The attack has a range of 30 feet. You are proficient with it, and you add your Dexterity modifier to its attack and damage rolls. It deals a amount of radiant damage equal to your Martial Arts die, as shown on the Monk table.

When you use the attack action on your turn to use this special attack, you can spend 1 ki point to make two additional attacks with it as a bonus action.

Searing Arc Strike
At 6th level, you gain the ability to channel your ki into searing waves of energy. Immediately after you take the Attack action on your turn, you can spend 2 ki points to cast the 1st level spell burning hands as a bonus action.

At 11th level, you gain the ability to create an orb of light that erupts into a devastating explosion. As an action, you can create an orb of light and hurl it at a point you choose within 150 feet, where it erupts into a sphere of radiant light for a brief but deadly instant. Each creature in that 20 foot radius sphere must succeed on a Constitution saving throw or take 2d6 radiant damage. A creature doesn’t need to make the save if the creature is behind total cover that is opaque.

You can increase the sphere’s power by spending ki points. Each point of ki you spend, up to a maximum of 3, increases the damage by 2d6.

Sun Shield
At 17th level, you become wreathed in a luminous aura. You shed bright light in a 30 foot radius and dim light for an additional 30 feet. You can extinguish or restore this light as a bonus action.

If a creature hits you with a melee attack while this light shines, you can use your reaction to deal radiant damage equal to 5 plus your Wisdom modifier to the creature.

The Way of the Sun Soul: Eat My Ki

Because of my history with the anime, I can so vividly picture each and every attack and ability featured in The Way of the Sun Soul.  I cannot wait to bring Krillin to the table at Dragon*Con this weekend!  He won’t be the hardest hitter, but he’ll prove his worth nonetheless.  And I hope to use him as a way of injecting the occasional bursts of humor and quips.

Although I sincerely hope, for his sake and that of the party’s, that my RPG character doesn’t die near as often as the anime character…

Speaking of anime characters:  Have you ever designed a PC around an anime character yourself?  Tell us about the inspiring character and the class/race mixes you used to bring him or her to life in our Character Sheets Facebook Group!