We here at Nerds on Earth are big, big fans of the Glass Cannon Podcast and the folks who run it.  I listen to them every Tuesday when I’m out on my daily ruck, and have been absolutely enjoying the additional content in the new Cannon Fodder segments.

One of the things that crew does with characters – both PCs and NPCs – is “cast” them; they announce which celebrity he or she looks like.  I love that!  Such a great idea, particularly when you’re working in a non-visual medium like they are.

I’ve taken up the habit myself now on both sides of the DM screen, and it has helped me lead and role play better as a result.  Here are a few reasons why you might consider casting your RPG characters.

The Pros of Casting Your Tabletop RPG Characters and NPCs

1. It gives everyone else at the table a reference for their imaginations.

Sure, there are visual companions like artist renderings in the Monster Manual that you can show your group – looking very much like any guest children’s book reader at your local library as you slowly bring the book to bear upon all in the room.  In fact, that art is awesome and should totally be appreciated and leveraged.  That approach works great when your group runs into its first bugbear.  But what about their second encounter with one?  Why does it look exactly like the first?  Should it?

Casting allows for some flexibility here!  Definitely show them a bugbear – or do a bang-up job of describing one – that first time, but consider casting it on subsequent encounters. 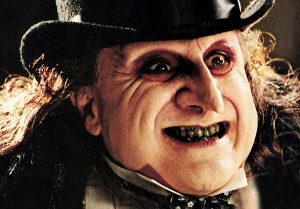 A bugbear utters a low growl as he trounces out of the shadows behind his wards.  He’s played by Danny DeVito’s Penguin, so when his features are illuminated by the flickering light of your torches, your eyes are drawn to his wretchedly hooked nose and the dark circles that frame his eyes beneath his furrowed brow.

This works equally well with your rolled characters.  Instead of declaring yourself as a Goliath Barbarian, cast him!  And don’t be afraid to make him or her a medley of well-known celebrities.

He’s got the build of Terry Crews, but with the face of Danny Trejo.  No mustache, though.  He’s not exactly a hit with the ladies.

You could even get away with using fictional characters.  Anything goes so long as they conjure up images in the minds of your group.

2.  Beyond appearances, celebrities and characters can give you ideas for all sorts of mannerisms.

One of my favorite unexpected sources of humor in the last couple of years of movies was Drax’s habit of taking everything super literally in 2014’s Guardians of the Galaxy.

Nothing goes over my head! My reflexes are too fast.  I would catch it.

Maybe you’re playing a character who has a below average Intelligence score.  Why not adapt Drax’s
literalism?  It would make for some pretty funny role playing moments!

Or maybe you’re playing a bard and channel your inner Quint of Jaws fame who constantly broke into song during conversations.  Why limit your talent to the battlefield or the tavern?

Perhaps you’re a haughty noble of some kind.  Adopt Magneto’s purple prose when rolling for Intimidation.

Or draft yourself a Claremontian catchphrase!

And you don’t have to limit your pool of candidates to pop culture, either.  My Goliath Barbarian is cast somewhat after two of the other Earth Nerds:  the brothers Sansbury (Jason and Will).  We play video games together a lot and their strategy has always been to rush in and get close regardless of the odds.  They are my Goliath’s spirit animals.  When it comes time for combat, their habits will influence how I approach the fight itself.

3.  Give your character a definitive voice.

I’m not the best when it comes to giving unique voices to my characters or NPCs, and even when I try I get them muddled or confused.  Having a voice for your PCs, in particular, can help distinguish between table talk and in-game speech, because we’re all guilty at times of blurring the line.

Maybe the mayor of a town speaks like Marlon Brando’s character in The Godfather, your dragonborn channel’s Christian Bale’s grizzly Batman voice, or the local priest sounds like Morgan Freeman.

Or you could just pick an accent:  English, Irish, etc.  Just make sure that if you go this route as a DM with NPCs you vary the accents so everyone doesn’t sound like they hail from Ireland for some reason! 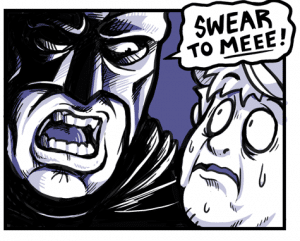 Whatever it is you decide:

1.  Write it down somewhere so you don’t forget.

2.  Use the voice whenever the character speaks.

You don’t necessarily have to be great at impersonations to pull them off to the desired effect, either.  One of my favorite examples of this comes from Glass Cannon again:  Troy gave Howie (the green sting scorpion familiar of Gormlaith) a Boston-area accent and it was a huge hit with everyone at the table.  You can give that a listen from about the 10 minute mark through the 12 minute mark of Episode 46: Marsh Madness.  Just listen to how well that landed with the PCs!

Yes, none of these pop culture figures exist in whatever world you’re adventuring in, but they do exist in ours and drawing upon them helps others frame their imaginations and helps you have a consistent approach to your own characters and NPCs.  This little bit of intentionality could go a long way in enhancing your overall experience by giving everyone at the table a little bit more to work with when it comes to immersing themselves into the fictional world.

Drop in on the Character Sheets group (one dedicated to RPG discussion) on Facebook to let us know about the RPG characters you have cast and how that casting affected your roleplaying!

What’s a Nerd to Watch: Recommended Shows for July