Tracy and Laura Hickman thought the vampire archetype was played out, used up, over-saturated. It was trite and mundane they thought, and pop culture had surely reached peak vampire.

Yet they were tasked with writing a horror Dungeons and Dragons adventure, and driven to do something fresh. They more than rose to the challenge, taking common vampire tropes, but giving them a D&D spin. After framing it up they play-tested it Halloween for five years before it was finally published.

The result was Ravenloft. 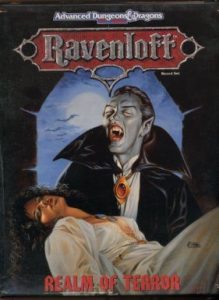 The story of Ravenloft involves an adventuring party (PCs) who travel to the land of Barovia, a small nation shrouded by a deadly magical mist. Barovia is tyrannically ruled by Count Strahd von Zarovich from Castle Ravenloft, the obligatory castle high on a craggy cliff. Terror and darkness reign in Barovia as residents must barricade their doors each night to avoid attacks by Strahd and his minions.

Cards included with the adventure introduce players to the Tome of Strahd, a book that details Strahd’s long-ago unrequited love. The tomes reveals that Count Strahd von Zarovich had fallen in love with a young girl, but she instead loved his younger brother.

Blaming his age for the rejection, Strahd made an evil pact to live forever. Strahd found that he had become a vampire, then slew his brother. This drove the young girl to kill herself in response.

Although the main objective is to destroy Count Strahd, the adventuring party journeys through Barovia and the castle, encountering magical weapons and adversaries, including zombies, ghouls, and ghosts.

In a twist of allegiances, players once discovering Strahd’s backstory would often pause at killing him, despite having a weapons capable of dispatching Strahd forever. Through the course of the adventure they would become engrossed in the story and taken by the character of Strahd.

Indeed, Count Strahd von Zarovich has become one of the more enduring D&D characters and Ravenloft remains played to this day, some 30+ years later. And since Ravenloft’s initial publication in 1983, it has received a sequel (1986’s Ravenloft II: The House on Gryphon Hill), a variety of supplements and adaptations, and even a full 226-page hardcover book entitled Expedition to Castle Ravenloft, written and designed for D&D 3.5. 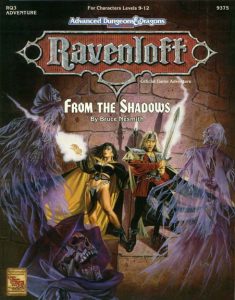 Expedition to Castle Ravenloft was based on the original module and not the Ravenloft material that was made in subsequent years. Expedition to Castle Ravenloft was designed to be played as a mini-campaign lasting about 20 game sessions, making it much longer than the original module. It also contained options for running 8-session or short 4-session adventures, and included suggestions for incorporating the adventure into other settings such as Eberron or the Forgotten Realms, the setting used by D&D 5e.

Is there a future version of Ravenloft in the works for D&D 5e? There have been hints to that effect, but outside of 2016’s story of giants, D&D’s future publication roadmap is speculation. But the popularity of Ravenloft is undeniable. For WotC not to bring it forward to 5th Edition would just be leaving money on the table.

In fact, the setting and some of the characters are briefly mentioned in places in the 5th edition manuals. In the meantime, a fan, Ravenspyre, has written and freely shares a nice guide to updating Ravenloft to 5e.

Ravenloft has made numerous best of all times lists, and only just missed Nerds on Earth’s best D&D modules of all time list, mainly due to the fact that’s it’s hard to categorize Ravenloft as just an adventure module at this point. Ravenloft is a big ‘ole thing, with characters and tales that go well beyond what I’m guessing Tracy and Laura Hickman could ever have imagined when they thought vampires were played out. 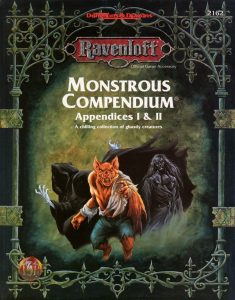 I don’t know, maybe it’s just that we feel sorry for poor ‘ole Count Strahd von Zarovich who will spend eternity rejected by love, a good person twisted evil by affairs of the heart.

Nah! All those feels are not at all why Ravenloft has remained so popular. It’s most certainly the vampires.

Thanks for reading. If you’ve enjoyed Nerds on Earth, please do us a solid and spread the word via the social media buttons all around the site and please like us on Facebook.
[ninja-inline id=10231]

UPDATE: Behold, there is Curse of Strahd.