Mike Mearls, chief D&D wizard, has confirmed it: The D&D braintrust have plans laid out for two D&D storylines per year from now through 2018.

So right now as we are enjoying the current storyline – Tyranny of Dragons – scheming is afoot in creation of the storylines we’ll enjoy for the next several years. But we know VERY little about these future stories. All we can do really is speculate.

But this is the internet, after all. It would be irresponsible NOT to speculate, because that’s what us crazy kids do on the internet. So, here I go with my best guesses on what the publishing schedule for the next several years of D&D will be.

This is the only portion of Wizard of the Coast’s (WotC) D&D publishing plan where we have official confirmation. The Elemental Evil Adventurer’s Handbook will be released in March 2015 and will be accompanied by Princes of the Apolcalypse of huge hardcover adventure fitting the elemental evil theme. (Update: The public finally got an official press release update. The storyline stayed exactly as anticipated, but the delivery method was tweaked from 2 books into 1. Here’s a concise recap, plus a look at auxiliary products.)

Here’s what else we know:

From this it is reasonable to assume we can expect to only have official story confirmation about 6 months in advance. It seems they’ll tease us to keep us on the hook, but we shouldn’t expect them to play their full hand, as the plans are sure to shift based on market and player feedback.

A final tidbit that is interesting from the only official information we have is that Elemental Evil marked the 2nd straight campaign set in The Forgotten Realms. Two points don’t plot a pattern, but is it reasonable to assume that they’ll remain in a single setting for two release cycles? Let’s speculate…

The only thing confirmed about D&D’s late 2015 releases (which I’m sure we can assume will drop at GenCon) is the general inspiration for the storyline: Alice in Wonderland. Let’s collect the clues we have, then I’ll share my best guess:

I think that Dungeons and Dragons will take us back to the World of Greyhawk in late 2015. WotC have been proven sincere when they say that they have a deep appreciation for the history of D&D, and little is more classic than Gary Gygax’s Greyhawk setting.

Sure, I may be off base in my speculation that a 1983 module would be reimagined for a modern 5e player base, but Chris Perkins has an appreciation for the source inspiration and could really make it shine.

Chris Perkins also intimated that the storyline after the Alice in Wonderland inspired story will be based on giants and a spark for the story will be a Shakespearean play. 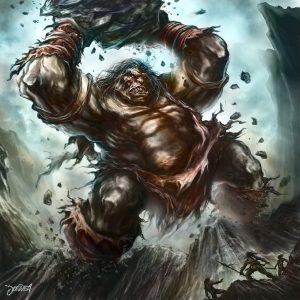 From 1976-1979, Dungeons and Dragons published some of the most iconic stories of giants, each of which were set in the World of Greyhawk.  Against the Giants contained three adventures: Steading of the Hill Giant Chief, Glacial Rift of the Frost Giant Jarl, and Hall of the Fire Giant King.

It would be a giant move (Boom! Dad pun!) by WotC to keep with the old school feel and rewrite these modules for today’s D&D faithful, while infusing some Shakespearean intrigue. I’m stoked with the Tyranny of Dragons miniatures, and you know they’ll sell me some giant miniatures (Hmm. That reminded me of jumbo shrimp).

We’re no longer on the map at this point. It’s all baseless speculation and if there have been clues dropped, I haven’t been able to sleuth them out. 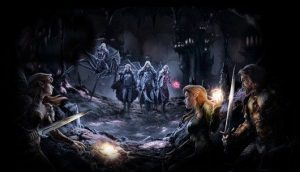 But here’s something interesting: Back in the day the Against the Giants adventures served as a lead-in to the Underdark, and a series of Drow centered adventures. Of course, these are the Drow of Greyhawk, not Drizzt of The Forgotten Realms.

An Underdark D&D storyline in late 2016 (let’s assume all late year releases will be at GenCon) would break pattern, as it would most likely be set in The Forgotten Realms or the World of Greyhawk, but we all know the Underdark is coming, and probably sooner, rather than later.

But Drizzt, the Drow, and Underdark are just too popular and profitable not to create storylines for. WotC is not a charitable non-profit corporation. They’ll not leave that money on the table. So even though two years into D&D’s 5th edition release, you would think the time would be right to unleash something new and fresh, my gut guess is we’ll stick strongly with traditional D&D lore like the Underdark.

If all the above speculation proves true, then the time is past right for WotC to go a little buck wild jiggy with it and deviate strongly from traditional Arthurian fantasy themes. 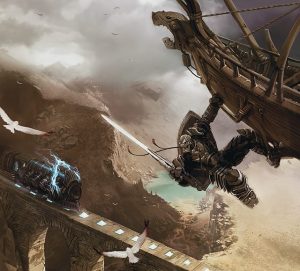 Psionics (Dark Sun), the Feywild, and (maybe?) Planescape are worthy options, but please swallow any food stuffs in your mouth, because you may do a spit take when I share that I think there’s a more likely option for D&D’s 2017 publication schedule.

By late 2017 I fully suspect that D&D’s publishing schedule will be releasing full campaign settings much more quickly. By this point it’s likely that a new Open Gaming License (OGL) will be in place and D&D players will be getting more third party content, making it less onerous on WotC to supply all the published adventures for a setting. 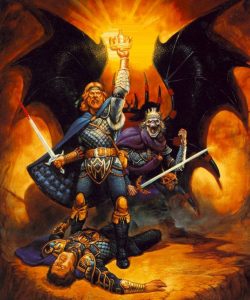 Given this new found flexibility, I speculate that WotC will focus on adding value in their core strength – their rich campaign settings – and leave much of the one off adventure writing to third party publishers.

By this point players would have had 5e storylines for The Forgetten Realms, Greyhawk, and Eberron. Why not add Dragonlance to those options?

Dragonlance would add interesting sub-races and aquatic races, plus some great throwback options like minotaurs. Dragon lance is hugely popular and could draw back from Tracy Hickman’s great work in the 80’s. 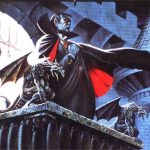 Let’s stick with our guess that at this point WotC is releasing 5e editions of popular campaign settings at a rate of 2 per year. If the previous year’s GenCon was the release of Dragonlance as a campaign setting, why pivot 90 degrees and drop a campaign setting with a uniquely different tone.

Ravenloft is gothic horror, which would fit a gap that at this point is a niche that hasn’t gotten attention in the D&D 5e release schedule. This would be an opportunity to flesh out 5e mechanics like MADNESS!, plus offer new player classes like vampires and lycanthropes. 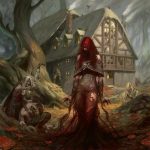 Mike Mearls said they had a D&D release schedule up through 2018. I have to believe that The Feywild is plotted somewhere on that roadmap.

After detours through Eberron and Ravenloft, The Feywild could provide fresh options for classic classes like the ranger, barbarian, and druid. (Maybe they could buff the Moon Circle Druid! Kidding.)

But it wouldn’t just be classic classes who would benefit from an infusion of some primal storylines. New Shaman and Warden classes could be introduced as well. I’m down.

Where does that leave Planescape, Spelljammer, and some of the others? Where does that leave space for something entirely new and off our grid entirely (like perhaps following the lead of Pathfinder’s popular pirate themed Skulls and Shackles, but use Chris Perkins’ Iomanda campaign setting)?

I don’t know. Again, this is all crazy speculation. Remember, there is 40 years of Dungeons and Dragons history to pull from, which is all the more remarkable because there was a brief period of time in there where Coldplay was popular.

So let’s put speculation aside, and remark on what we know to be confirmed true. Mike Mearls, Chris Perkins, and Jeremy Crawford et al. have shown that they care deeply about the rich history of D&D. They’ve also shown through 5e that it’s also important that D&D feel modern and play elegantly.

The success of 5e is strong proof in the pudding that there will be a long release cycle of D&D 5e products, and we don’t have to speculate on if it will be good. We know we’re in for a treat.

“@EarthNerdClave: I know you can't spill any beans, but how were my best guesses? http://t.co/N22Pyw91ue”

Update: Chris Perkins replied via Twitter that this is 33% accurate, adding that it’s not too shabby with a handclap emoticon. That’s a clever way to say that of course some of this is right, but not give anything away as to which of it is right. He’s a crafty DM.

So the big question becomes if more of this is actually accurate in terms of content, albeit time shifted slightly. Of course, of that he didn’t say.

Comic Characters You Should Know: Quake

Magical Mazes to Architectural Adventuring: The Transformation of D&D’s…

Magical Mazes to Architectural Adventuring: The…