Once upon a time, long, long ago, it was a time of zeppelins and dragons and all of America was enjoying a brilliantly acclaimed film called Howard the Duck. Ask your parents about it.

And although it had been teased before, this was also the year that the Dungeoneer’s Survival Guide was released and The Underdark was finally described in full detail. Nearly 30 years later, Dungeon and Dragon’s storyline is taking us back into The Underdark with their release of Out of the Abyss, a long-form adventure module designed to take characters from level 1 to 15 in the world’s greatest roleplaying game.

Review of Out of the Abyss: The Story 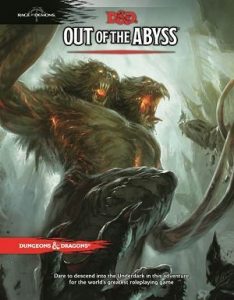 I won’t insult you by merely outlining the table of contents and calling it a review. But it will be helpful for me to share a brief overview of the story to set our feet on the same plane.

The story begins with the PCs being prisoner of the Drow and held in the Underdark. Their escape promotes a chase and hunt from the Drow, of course, but it also sets up brilliant opportunities for adventure in a wide variety of locations, meeting strange and interesting creatures. But as the PCs struggle to escape The Underdark for the surface world, they begin to notice a demonic presence creeping in, sometimes even into their own adventuring party.

As PCs finally escape The Underdark and bathe in the sunlight of the surface world, they are met with a tension. If demons are roaming free The Underdark, shouldn’t the PCs go back there to stop them? They are heroes, after all.

Much like the fantastic new Mad Max film, the plot is simply to take a trip, then turn right around and come back. But that over-simplification belies the true creativity of Out of the Abyss. Much like a Jack Kerouac novel, the adventure lies on the road, in the journey itself. 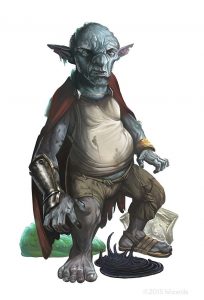 Indeed, while we are talking literature, Chris Perkins, the story creator for Out of the Abyss, has been open that his inspiration was Alice in Wonderland, and this shines through as madcap characters abound, infusing a sense of whimsy into a clearly dangerous setting. D&D players who like their roleplaying to contain a heaping portion of grim with a side of all seriousness might not like the wry humor that shines through the dark, cavernous setting. But I loved it.

In fact, I think the juxtaposition of deadly demons and dangerous enemies with thrill-seeking goblins and little brother toadstools is what makes this latest Dungeons and Dragons story so special.

It’s almost as if the adventure writers time and again dared to push players’ toes to the edge of a perilous precipice, then when all felt lost, gave us a little wink, as if to say “c’mon, let’s have some fun with this.”

Review of Out of the Abyss: The Details 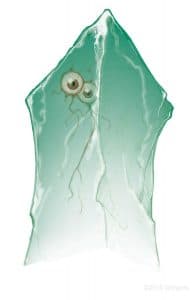 From the opening pages, PCs are thrust together with a gaggle of NPCs. In keeping with the madcap undertones, these NPCS are nowhere near the vanilla variety, and the cast only grows as the adventure progresses. DMs might need to take improv or voice acting lessons simply to keep track of the NPCs and give voice to all the characters in Out of the Abyss!

Something similar is true of players as well, being that they may indeed need to play one of these NPCs in addition to their rolled character. But as I highlight that Out of the Abyss is not an adventure for beginners, I’ll remind that the Starter Set and its excellent included adventure is for those new to D&D.

Indeed, the roleplaying sophistication of Out of the Abyss is a feature, not a bug. As almost always, I’ll roll a wizard, then have a blast exploring the various destinations in The Underdark. But then you tell me I might also be able to control a sentient gelatinous cube NPC named Glabbagool, a psychotic derro, or an introverted fungus character named Rumpadump? Best D&D game ever.

At 256 pages, that only scratches the surface of the depth and interesting touches that are included in Out of the Abyss, and I can enthusiastically confirm that you’ll get your gold pieces worth simply in reading through the adventure. PCs interact with the above and more, and by the time PCs have battled baddies like The Pudding King, they bid farewell to The Underdark. Or do they?

Review of Out of the Abyss: We’ve Come for the Demons

Of course, the PCs story doesn’t end until they’ve conquered their demons. And what is fun about Out of the Abyss is that it isn’t just one demon, it’s ALL THE DEMONS!

Appendix D of the book outlines the 8 demons that need to be pushed back into the abyss from which they came. Each get a two page spread, allowing each to get their own flavor and personality. (Is personality the word I am looking for when describing a demon? How about grotesqueness? Psychoanalysis? Eh, whatever. The artwork is amazing!)

Maybe the most ominous demon is Baphomet himself, appearing as a 20-foot-tall horned minotaur. When I invent my time machine I’ll go back to Matthew, Mark, Luke (or John) and ask them to put a Baphomet reference in there, as it sure would make my job easier. Before Out of the Abyss, we haven’t seen this level of demon hunting since Jesus cured a demon-possessed man by casting the demon into a herd of swine, driving them mad and stampeding off a cliff!  A Bible reference?! Aw, snap, you just got Sunday-schooled, y’all!

Respect also to Orcus and Demogorgon, but my favorite demon is Yeenoghu, the cuddly Beast of Butchery. As such, I had my fingers crossed that the entire of the Forgotten Realms would be turned into gnolls, yet the story writers had a different ending in mind, and I dare not spoil it for you.

Review of Out of the Abyss: Bottom Line

Bottom line? I loved Out of the Abyss and I think you will too. My bias as a player is right around the 4-9th level range, so I particularly liked the first half of the book, with its emphasis on escape and evasion, plus its rotating cast of zany characters.

So I don’t know that I’d go back into the abyss as the back half of the book suggests. That’s not to say that the 2nd half of the storyline is weak. Far from it. Instead, I share that to highlight the flexibility of the book. Gaming groups could play the front or back parts of the book as separate campaigns, as well as pull one of the city settings out of the book and play it as a one-off mini-campaign.