By Jason Sansbury On Sep 9, 2015 Last updated May 28, 2018
Share TwitterReddItPinterestFacebookEmailPrint

You may have already seen my picks for the best offensive players if the X-men played football. If not, I’d start there and come back here knowing that my only criteria was that players would only play on one side of the ball. 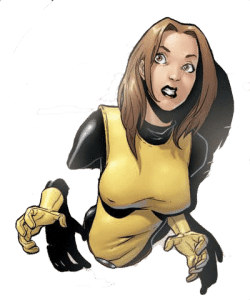 Like on offense, you got to start in the trenches. And I have one obvious pick and one not-so-obvious pick. The obvious pick: Strong Guy. I mean, the name says it all. He is going to hold down the line and strength wise, he can pack the punch you need in a quality defensive tackle.

My next pick: Kitty Pryde aka Shadowcat. You might dismiss her because of her lack of stature and super strength. But Pryde will get through any block. Literally, through any block. And lest you think that she won’t be effective tackler, I’d remind you that Kitty is a ninja ever since the Wolverine and Kitty Pryde mini-series.

Defensive Ends: Sunspot and The Beast

So, now, you need some explosiveness on the outside edge rushers. They need to be quick of feet, strong, smart and willing to do whatever it takes to win. My first defensive end would be Hank McCoy aka The Beast. He is quick, strong and just seems like a natural football guy.

For the other side, I am going international, looking for someone who is strong and has great feet. The Brazilian member of the New Mutants, Roberto DeCosta aka Sunspot is a natural soccer superstar, whose footwork and ability to quickly get stronger makes him a natural edge rusher. Plus, since he is on defense, we don’t have to worry about his lack of hand-eye coordination.

Which brings us to the heart of any good defense: the linebackers.  And I have 3 excellent picks.

First up, a player that people were stunned wasn’t a part of my offensive team: Cyclops. Cyclops is on the team because I think his power set is more about knocking things down instead of making a hole for a running back.

But as much as Scott Summers is on my team for his powers, it is two other aspects that make him a perfect middle linebacker: leadership and his skill at geometry.  The leadership skill is obvious. Cyclops was coached to be a leader since his school aged days. And the geometry skill set gets neglected in most modern stories but having a guy who understands angles is a huge asset.

And my next pick draws from some of the same skills sets: I want Warlock-Cypher. So maybe I might get an extra man on the field penalty but generally these two guys work together: Warlock brings the power and adaptability. No matter what your defense needs, the morphing power of Warlock makes that easy. But the power comes with Cypher, who has the ability to understand any language, which I take to mean football offensive schemes are going to be second nature to these two!

So now we need to talk about who covers the wide receivers. We need crafty, skilled and fast cornerbacks. First up, I want Longshot. His obvious physical skills work well as he is agile, strong, light on his feet, as his bones are hollow like a bird’s after all.

But in the defensive game, you need always want to create some turnovers, taking the ball back. That requires skill AND luck. Welcome to the team, you lucky, lucky man Longshot!

And on the other side, I need flat out speed and Northstar, the Canadian flying sensation can take his obvious powers and physical skills (He is a decorated skiing star!) to cover anyone.

And the idea of a Northstar and Quicksilver showdown makes me qiddy, as each is a bit like the modern wide receivers and cornerbacks we all know and love. These guys are the Dez Bryant and Richard Sherman of the Marvel Mutant World.

Finally, we need safeties, superstars that can cover the deep part of the field as well as be willing to come up and lay the smack down. For the coverage, I want the wind rider herself, Storm.

Storm will be the clear leader of the secondary and be able to cover the field; I just don’t think anything is going to get deep on her. And for that power tackling, I want Rogue’s amazing combination of speed and power. She is as tough as any of my linemen choices but she is also quick and fast as all get out.

So there is my all time X-men universe defensive superstars.  So who did I miss? What substitutions would you make. And if you disagree with me about Kitty Pryde, you are dead wrong.