Another Labor Day weekend gone, another Dragon*Con in the books.  This year I felt a little underwhelmed by most of the panels I sat in on (due in part to easily addressed logistical issues that I’m emailing *Con staff about later today), but some where absolutely fantastic.

My favorites of this year: MST3K Wars and Scientists vs Movies.  If you missed the latter of those two, you really missed out. Plan for it next year!

Every year, though, I find myself attending fewer panels and doing way more people watching. (But not the creepy kind of way, I swear!) Just finding a nice perch in the Marriott with a friend and playing “Name That Character” is good times.

Where that game really hits its stride is when you see cosplay amalgams.  Instead of feeling pigeonholed into a single character, some cosplayers combine two or three into a get-up that is greater than the sum of its parts.  Then the game evolves into a contest to see who could generate the best portmanteau for this new creation. Kinda like Bennifer or Brangelina.

Two trends we noticed this year while people watching at Dragon Con:

Three most-favored cosplays (at least that we could recognize and in no special order):

And all for fairly obvious reasons.  Mad Max was a big hit and had a strong female lead, Deadpool has finally got some cinematic traction (not to mention his fan-favorite comic antics), and Harley is among the much-hyped Suicide Squad movie due out next year.

Lots of gender swapped characters.  Earth Nerd Turff and I had an interesting discussion about this growing phenomenon.  Our conclusion: It can be done extremely well, but only succeeds when it is not just a dude obnoxiously wearing a bikini…or worse: Leeloo’s get up from The Fifth Element.

We most enjoyed the swaps that thought creatively about what a female Joker would look like instead of just dressing a female up in a purple suit, for example.  The guy running around in a costume clearly designed with the female form in mind was less impressive and more disturbing.  Let creativity and thoughtfulness win out over shock value or a quick chuckle. 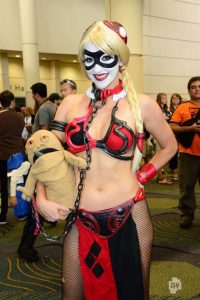 It is enjoyable to watch as fellow nerds stop each other, praise costumes, and ask for pictures.  Anyone can become a celebrity over the course of the weekend.  As I watch, I’m struck by the overwhelming sense of community and acceptance.  I didn’t even have to know the source material for a particular costume in order to appreciate it, the person rocking it, and the tens of thousands of others who appreciate those two things as well.

And I think that is the power of the *Con.  Sure, there are celebrity guests to meet, autographs to be had, and panels to sit in on…but the real power resides in the people on this side of those tables where love, acceptance, and celebration run rampant on the crazy carpets of the host hotels.

I’ve gone on record hoping to see that kind of community take root beyond any convention gathering, and I stand by it.  What cosplayers love most about Dragon*Con is not something necessarily restricted to Dragon*Con.  Sure, you probably can’t get away with wearing your Wookie costume on casual Friday to the office, but we’re smart people!

I’m confident we can find ways to broadcast our affinities and fanbases appropriately and not fear the reception.  But of course that requires not only that we wear that Star Trek shirt to work, but that we be a part of the welcome wagon when we see others doing so.  It most certainly is a double duty and it starts with you!

I’ve never cosplayed, but I think Dragon*Con 2016 will remedy that.  For the first time I felt like I was missing out on some great fun by not participating!  It is about time I heed Morgan’s words and get in on this action.  (Luckily I will also have her around to help me out with my costumes, too.  Surprise, Morgan!)  I’ve already purchased my ticket to next year’s event (and you can do that here).

Not convinced Dragon*Con is for you?  Read this!  It is a bit dated, but the truth is I could easily comb through 2015’s offerings, plug them in where appropriate, and the end of the article would remain the same:  I think you’d be surprised!  There’s something for everyone and that is the beauty of the *Con.  It truly is a melting pot.