Adkins A couple weeks back, I opened Slack and found a picture of Morgan, Jennifer, and two of their friends packed tightly into a vehicle. They were all smiles and the photo’s caption read, “On the way to the con!”

Now I’ve been to Dragon*Con myself (and will be returning again this year) and I’m even aware of a few other cons (Gen Con, Comic Con, PAX, etc), but I had no idea which con they were heading to. So I figured I’d pick their brains about their various convention experiences this week for our Weekly Nerd Chat.

So first things first, ladies: Which convention were you two en route to when you sent the rest of us Nerds that selfie?

Morgan  Alright! We went to this con in Birmingham, Alabama called Magic City Con. It was only its second year but I think the population grew from about 2,000 to probably 3,000-4,000 people.

Adkins  How did you hear about Magic City Con? And does it have a focus? Like, is it a specifically a cosplay convention or a gaming convention, etc?

Jennifer I heard about it from Rita directly at a huge Mass Effect get together in November. And I texted Morgan right away saying that we needed to go.

Morgan It has somewhat of a focus right now on Bioware, video game themed. I think the focus is unintentional. But I think it’s pretty open on cosplay and things sold in the vendors hall.

The convention has cosplays, panels, cosplay contest, a gaming room, whether you want to play Smash or board games.

Adkins That’s pretty cool that you just kinda bumped into one of the organizers! Did she tell you anything about Magic City Con’s origin story?

Jennifer All she said was that she just really enjoyed cons and wanted to do one herself. And her personality and organization (I mean, you gotta be organized to do a con) made it possible for her to do. And she is always so jazzed about it. It was infectious.

Adkins Usually conventions have to have some decent cred to attract big named talent for things like panels and signings. At year two, what did Magic City Con offer in those areas?

Adkins One of your favorites! Talk about a big name that just screams Bioware.

Adkins Did you get to meet any or all of them?!

Jennifer All of them.

Morgan  All of them. We got to hang out with them as well. Got to eat at Steak n’ Shake with Danny. Got to do a Voice Acting Master Class with Jennifer. And danced with Steve at the Masquerade.

Adkins Now that is something you don’t hear about much when it comes to some of the larger cons: The talent out mingling with convention attendees. I mean, I’ve bumped into Felicia Day and Adam Savage walking around at Dragon*Con before, but they’re pretty rare happenings.

Jennifer I had a great discussion with Jennifer just in passing. It was awesome.

Morgan The thing with smaller cons, they are just way more intimate. They don’t feel the need to have escorts and body guards. They feel comfortable in the small groups.

Jennifer Jennifer even got “arrested” by some Mercs.

Morgan I mean Danny and Steve even attended some parties that people had in their hotel rooms.

Adkins So how would you sell Magic City Con to someone? What are its biggest draws?

Jennifer Intimacy. With other con goers and the guests.

Morgan It’ll be in the same hotel as a big shopping center, as well as where most of the con goers can stay. You literally don’t have to walk outside ever. And the vendors sold some really cool AFFORDABLE stuff.

Adkins So Morgan just doesn’t want to have to deal with sunlight. I call vampire!

Jennifer, you highlight the intimacy as a major selling point. How does that compare with Dragon*Con in your eyes? Its definitely a much larger convention (at least for the moment!), but you love it, too.

Jennifer I love Dragon*Con. A lot. It was my first.

But my goodness, the crowds.

But on the other hand, the cosplays!

Morgan Dragon*Con has never been a meet new friends to keep con. Unless you join a fandom group. I love big cons because of the hype from crowds. It’s overwhelming and hard to walk through, but at the same time I eat up that nerdy energy and could run off it for days.

Also of course Dragon*Con has super huge name guests. Which is great, you just won’t get that intimate moment with them

Morgan One of my favorite moments. Lucy “Flawless” screamed at me in fear

So both of you have authored posts covering all kinds of con elements: Cosplay do’s and don’ts, con prep, etc. Most recently Morgan wrote a piece comparing big cons to smaller cons and I love her closing thought: Do both! Diversity of experience will lead to greater satisfaction. So to close, which conventions are you two hoping to attend in the future and give readers a CliffsNotes version of why. 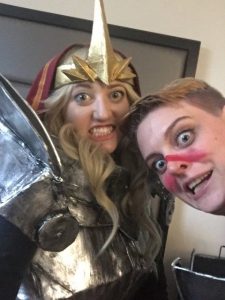 Jennifer We are both going to Dragon*Con in September because…well, duh! Haha. But really I plan to continue Dragon*Con and MCC for a bit. Or at least as long as my bank account allows it. I love aspects of each con so much. The panels at DC are awesome. The guests are amazing. But MCC has all my fandom family and amazing guests. Plus great vendors with low prices.

Morgan Same as she said, except I plan to add a few more on in the future. For me, making connections is important, and conventions help a lot. I plan on going just for Saturday AWA. And still looking for more.

And yeah I like to refer to the term Fanmily.

Which I have one big and growing.

Adkins Sounds like you both do and have conventions to thank for that. Very cool!