Adkins This past weekend I had the honor of DMing Curse of Strahd for a bunch of Earth Nerds; Will, Clave, Jason, and Turff, to be exact. They survived the Death House in our first session and are currently trying to find sanctuary for Ireena Kolyana. But as with any campaign, it all began with character creation.

Will went with a cleric; the only class he’s particularly familiar with. Nothing wrong with that, but Jason and I thought we might use this week’s Nerd Chat to fill Will (and you!) in on a few of the other class options so that after I execute my TPK-…er….next time he has a chance to roll up a new character, he feels a bit more acquainted with them.

So first things first, Will. Why did you decide upon the cleric? What draws you to that particular class? And what elements do you see in other classes that you might like to play with?

Will I don’t think I decided on a cleric—I’m pretty sure Jason told me to play one! But it’s all good – I like how clerics play such a big role in the party by making everyone better and keeping folks alive.

As for other classes, I tend to be drawn to the magical types. Wizards, warlocks, druids… the characters who do more than swing a sword or an axe.

Jason There is no doubt. If they did the stats, more TPKs have to happen when groups don’t have a

cleric or the cleric goes down first. You just have to have the healing to survive! The combination of healing powers and some warrior capabilities make clerics a good in-between in some ways.

And there is definitely something cool about the world of the wizards and other magic users. But keeping those characters alive through the first few levels is tough.

Adkins So does the cleric scratch your magical type itch sufficiently, or are you looking for something that goes a bit deeper into spells and such?

Will The thing with clerics is that you’re always holding back your spells until the party needs them. It would be cool to be flinging fireballs and magic missiles at will without worrying about if you’re burning the spell slots that would keep people alive. So yeah—the idea of a battle mage or some other sort of character that uses magic to kick butt, rather than to save butts, is enticing. I just don’t know what that means beyond the stereotype of Gandalf the Grey, though.

Adkins That is a really interesting perspective on the cleric: That you feel almost restrained a bit when it comes to your spell slots. Never thought of it that way!

I’m not well versed in the magic-wielding classes myself, but I do believe Jason can speak to them some.

Jason For certain, wizards can do some things that clerics can’t. You are right in that wizards can be much more offensive or their spells play out in role playing much more.

Everyone loves a fireball but an ability to cast a disguise or some other such spell can keep a group of adventurers out of some fights!

Will That’s an interesting point. I do think my love of the magic users comes from my days of discovering D&D when it was all about getting magical items and killing everything in site. Now that I’m getting into playing as an adult, I’m enjoying the actual, you know, roleplaying a lot more. I hadn’t thought about how magic could matter outside of a fight.

Jason And there are other casters of magic as well. For instance, a sorcerer or a warlock both have magic as well. Warlocks tend to be offensive juggernauts, regaining spell slots with short rests. Sorcerers are the most flexible in terms of magic, as they can trade spell levels for casting slots.

Each has its own appeal and use.

Something in-between might be a Druid, where a connection with nature has given powers. Clave is playing a Druid really well right now in our campaign. Plus they aren’t completely useless in a fist fight.

Will I’ve definitely had my interest piqued by Clave’s Druid. Seems to be a good mix of offensive capability and utility spells and skills.

I actually didn’t realize until he saved our butts last week that characters outside of clerics and paladins can heal.

Jason He definitely saved our hides, sorta, when we went wandering through the woods this time.

Magic in 5e and the kinds of spells it offers across the classes is pretty unique. Once you hit level 3 and 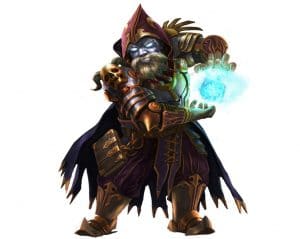 above you really want to dig in and see what your class has and offers.

For instance, my Ranger has some very offensive spells that can make him a mini-tank but he also has some options that can help protect and heal. Figuring out that balance especially in regards to others in your team is huge.

Adkins I must say that I’m surprised by you favoring the magic users over sword-and-shield types. Sansburys tend to rush in guns a’blazing. I had both of you pinned as Barbarians or Fighters. I mean, you already have those classes’ MOs nailed!

Will Yes, but, you see, in D&D, there are no respawns.

Adkins I mean…there are…just at way higher levels and not nearly as frequently.

Will I’ve really cursed myself, then, haven’t I? Once the cleric can resurrect folks, it doesn’t make sense for HIM to be the one running in like a battle-crazed fool.

Adkins Well, and to be fair: The Barbarian and Fighter are really well suited by design for that up close and personal combat that has long been the mark of a Sansbury in games.

Jason I will say, there is something nice about being able to bash things and crush skulls when needed. So my Dragonborn Paladin has become our tank with a high AC and the ability to really lay some damage. It makes me wonder what kind of damage would a pure fighter or barbarian be doing as we close in on level 4. It seems like it might make some of these fights much shorter, which would be nice

Will Wait, it’s not supposed to take us 87 rounds to slay four direwolves?

Jason I am sure they were level 24 dire wolves.

Our MO has become stay alive and knick things to death 4 points at a time. And that doesn’t feel like a long term plan.

Adkins I’m playing a Goliath Barbarian in another campaign and he is beastly. d12 hit die, d12 damage die (great axe), and his rages basically double his HP (because he becomes resistant to slashing, bludgeoning, and piercing – the most common damage types).

And at level 3, I picked up the bear totem which means that when I’m raging he is resistant to pretty much all damage types.

And Fighters get Superiority Dice that allow them both offensive and defensive maneuvers that grant them a ton of flexibility and utility in close combat.

Jason So, talk through the Barbarian in general. What drew you to the class and what is the preferred damage you are causing with him?

Will Yeah – do. I’m definitely listening. It’d be fun to feel like I’m doing more than delaying inevitable TPK. Especially since I can’t seem to land any Sacred Flame damage in this campaign.

My god must be otherwise occupied…

Will Mannan mac Lir, god of the sea, says “you went inland to a spooky country with vampires? Yeah, good luck with that.”

Adkins To be honest: I’m unnerved by being on the front line, so choosing the Barbarian stretches me – 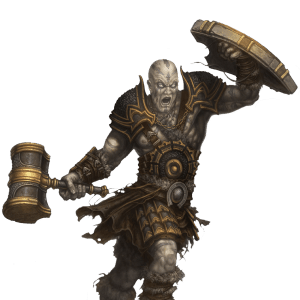 takes me out of my comfort zone. I’m not darting in and out like I did when I was a Rogue, and I’m not standing back and damaging or buffing from afar. I’m only useful in the enemy’s face. That challenges my propensities, and the challenge was the biggest draw for me.

Jason Yeah. The mindset of a Fighter or a Barbarian has to be that way, otherwise, your party misses your skills and gifts that make your class unique.

And, honestly, if you are going to a Fighter who isn’t in the forefront mixing it up, then be a Ranger and take all the bow bonuses that come with that.

Adkins I’m all for that challenge. I think that is part of the beauty of role playing games like DnD and Pathfinder. You can be what you’re comfortable with, or you can stretch yourself in a number of ways by putting yourself in the shoes of a class that operates in a way that is perpendicular to your actual personality and strive to live into it.

Will I like that — I mean, after all, this is all about escapism and living a totally different reality for a little bit, so having the chance to change it up and do something that’s not in your DNA is exciting. It kinda makes me look forward to when Strahd kills us all…

Jason Regardless, playing RPGs is fun and even if your character dies, you can find a new role, a new skill set and continue adventuring!

Adkins *Writes in notebook: “Will all for TPK in Strahd”*

Will As if I have a choice…

A Recap and Review of Agents of SHIELD Episode 402: Meet the New Boss