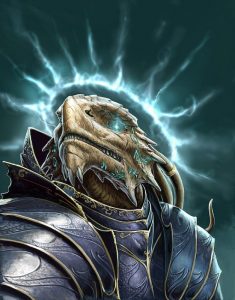 So, first, why Dragonborn when rolling up a paladin? I mean, let’s be honest, at the end of the day, I want to be able to say “I spit fire” and burn things. (Here’s a look at a fire-breathing Dragonborn barbarian.)

Plus, at some point, this guy is totally going to win a hip-hop battle. I just feel it.

The added strength and charisma score that come from being a part of the Dragonborn seem to guide naturally into making him a Paladin. While the other types of the Dragonborn race and their spit weapons were intriguing, I kept it simple and stuck with being a Red Fire Breathing Dragonborn.

And I went with the Paladin class for a few party specific reasons:

In terms of statistics, I put the focus on the characteristics that serve a Paladin best, so he has extremely high strength and charisma, but has a losing statistic in wisdom. Thus far, that liability hasn’t hurt him too badly.

As he has advanced in levels (current level 3), it has let him take on some new abilities.

In terms of character, he was sent out alongside his Goliath friend by their monastery’s master after the master had a dream of them in the world. While the Goliath has much more certainty in that call, this Dragonborn character is unsure and is really only confident in that call when he is in battle and cutting things to pieces. (His dual wielding weapons has proven really helpful in close in, hand to hand combat. He is carrying basically no ranged attack at all, so that may need to be rectified fairly quickly.)

While he thrives in violence, he also has a deep sense that power is to be used to add the disadvantaged. I use that principal to guide him along in what he would choose to do.

Revisiting Video Games of the Past: Diablo 3