D&D 5e Dragonborn Barbarian: A Look at the Race and Class

As I’m skimming through D&D content around the web, I’m noticing that 99.4% of it talks about how to develop a nuanced and interesting backstory for your character, how to properly role-play your character, or how to carefully curate the story of your character.

I dig that stuff.

Today, I just want to roll up a freakin’ fire-breathing barbarian.

Don’t judge me. It’s a power fantasy, OK? Role-playing is not everyone’s cup of tea, and removing it in favor of simply rolling for initiative leaves D&D as a perfectly serviceable game (especially if you play a fire-breathing barbarian). So here is mine. 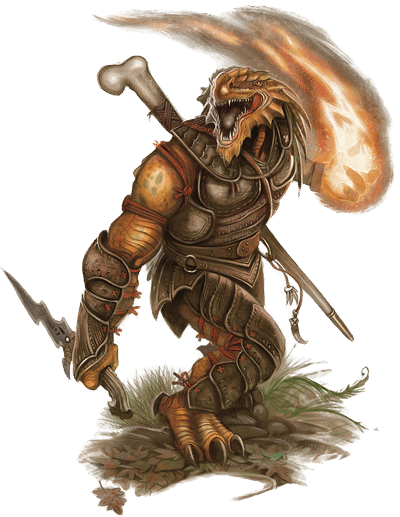 Dragonborn are big buggers (standing around 6’5″) who resemble what their name suggests: humanoid dragons.

A dragonborn’s head features a blunt snout, a heavy brow, and reptilian frills around their head. On the back of the head, they have a crest of hornlike scales that resembles a mess of ropy hair. Dragonborn feet and hands are quite claw-like and their bodies are at least partially covered in a scaly hide.

Dragonborn also have the capacity to use a breath weapon, which is quite lovely.

Dragon born are newer to D&D, having a cameo in 3.5, then coming in hardcore in 4e. As a result, their lore isn’t as fully formed as that of an elf, dwarf, or halfling, but some of the new novels (like Ashes of the Tyrant) are beginning to flesh them out.

But I don’t care about that, as I’m only interested in the breathe weapon right now, and to keep it up close and deadly, I’m going with the barbarian class, a rough and tumble melee class in D&D.

Barbarians are known for their rage ability, which gives you a bit more damage and let’s you roar at the table as you go berserk. You get to rage three times before it zonks you out and you need a nice long nappy.

I went ahead and rolled up our 5e dragonborn barbarian at level 5, mainly because I wanted to chat a bit about the abilities you get.

First of all, I went the Path of the Berserker, which means at 3rd level you go a little more frenzy than even a typical rage gets you. It basically means you can make a single melee attack as a bonus action. Then at 6th level, your rage goes mindless.

At 2nd level your D&D 5e dragonborn barbarian can throw aside all concern for defense and do a Reckless Attack. Doing so let’s you use your strength as an advantage. Also at 2nd level you get a Danger Sense, which gives you an advantage on saves.

At 5th level you get Fast Movement, but the big thing is you get an Extra Attack, meaning you can attack twice. Barbarians attacking twice is nice.

But let’s circle back to the breath weapon, as I said this was a fire breathing barbarian. Depending on what type of dragon ancestry your dragonborn has, your character gets a breath weapon.

I chose red dragon, so the breath weapon is fire! Once per rest, your character can open his/her mouth and exhale destructive energy. And this isn’t a circus trick, it does 2d6 damage and increases as your character levels up.

Again, I’m not saying this is the most subtle D&D character that 5e has to offer, but sometimes you just want to roll initiative and burn down the joint.

I’ve included a sample character you can download (Level 5 Dragonborn Barbarian), but I didn’t include a lick of backstory for it, up to not even including a name. When you breath fire, there is no sense worrying about stuff like that.

A Primer: Understand the Different Editions of Dungeons and Dragons