Review of Ashes of the Tyrant: A D&D Novel by Erin M. Evans

By Clave Jones On May 12, 2016 Last updated May 12, 2016
Share TwitterReddItPinterestFacebookEmailPrint

An acquaintance told me that I should stay away from the D&D books written by Erin Evans because they are “lovelorn angsty.” I unfortunately listened to that advice, skipping Brimstone Angels and The Adversary.

I haven’t made such a huge error in judgment since the time I thought I could make a quart of Cherry Garcia last a whole week. Man, that did work out the way I had hoped.

A Review of Ashes of the Tyrant 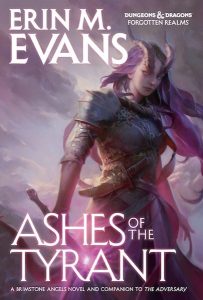 Erin M. Evans continues to tell the story of her signature characters, two iconic tiefling twins, and their adventures within the Forgotten Realms. After the Sundering (a significant event of magical upheaval in the Forgotten Realms), Mehen, the twins’ adopted father, has been called back to his dragonborn home city.

So Mehen is facing his past, which leaves his daughters to handle a few tiny other little things on their own. Oh, things like tracking down a murderer.

Ashes of the Tyrant is family relationships, political intrigue, engaging mysteries, dark rituals, and thrilling combat, all in a hollow pyramid that houses a 30,000+ dragonborn city.

Honestly, the book is worth it just for its amazing cover, but I must point how great the characters are in this book. There is the tiefling, Farideh, of course, but there are many more than that, including a kickass grandma. Each character shines and grows, all in believable, compelling ways.

A Review of Ashes of the Tyrant: Erin M. Evans

Having never read an Erin Evans novel before I wanted to research a little bit into her background. It turns out she has an Anthropology degree, and boy does it show up in her work in wonderful ways.

Writing shared world fiction is difficult. So many of the beats are already established, and the world around the characters is already really well-framed, up to the point of even the plot of the book may be already mapped out. But Evans introduces small little world details that say a great deal about the Forgotten Realms setting. 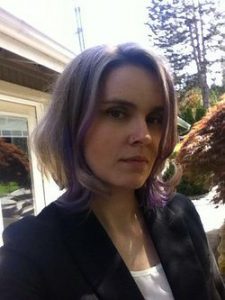 After decades, it is fun to see the Forgotten Realms continue to get more and more flavor. I think Wizards of the Coast have been brilliant in setting up Evans for this task. Just as Salvatore “wrote the book” on the drow, Evans is skillfully doing the same for tieflings and dragonborn.

Occasionally, this slows the book down. In dragonborn society, people go by a given name and a clan name, and the book used them interchangeably. As a reader, I once in a while felt as if things could get confusing. Remember when fantasy books used to have the dramatis personae in the front of a book? Well, I would’ve referred to that a couple times during the read.

A Review of Ashes of the Tyrant: Final Thoughts

If you play D&D 5th Edition, this book can even help you with the roleplaying side of running your dragonborn. Even as you flip through pages of the Player’s Handbook to the dragonborn and tiefling section, you can just feel the flavor being added to those pages.

It’s a great book. If you like your mystery and intrigue, and sure, a little lovelorn angst, you will love this book. More, Ashes of the Tyrant is a nice contribution to the Forgotten Realms themselves, adding lore, story, and characters.

Pick up the book.

[Disclosure: Wizards of the Coast provided a copy of the book for review.]

A Recap and Review of Agents of SHIELD Episode 320: Emancipation