Nerd culture has certainly grown large over the last 30 years or so. (For a great examination of it, I could not recommend more Glen Weldon’s recent book The Caped Crusade, where he examines that idea of the growth of nerd culture through the framework of the icon Batman.)

But, crazy, wild fantastic stories and imaginations didn’t just sprout into being 30 years ago. There have long been writers, authors, creators who were using their hearts and imaginations to create fantastic works that sometimes get lost in our modern world.

Today, let’s look at the creator Edgar Rice Burroughs. Burroughs was born at the end of the 19th century and was a bridge into the next century. Originally, he wrote under another name as he was worried about sullying his reputation. Once some of his works proved influential, he became using his real name. So what makes him a nerd?

Fantastical vision. Burroughs was born before the invention of flight. Yet, he wrote about adventures on other worlds. Two of his series centered on Mars and Venus. And in the days before flight, Burroughs created a wormhole type device to move his main character, John Carter, back and forth.

While the recent attempt to turn John Carter of Mars into a movie franchise failed, the source material is a really rich tapestry of science fiction, gladiatorial battles and romance.

Turning the Other into adventure. Burroughs is most famous for his stories about a white child who is raised in the African jungle by apes after the death of his parents. To the vast majority of his American readers, Africa was a far off, misunderstood place and yet they were transported there by the stories of Tarzan of the Apes. In both Tarzan and John Carter, Burroughs takes the little bit that his reader may know and builds off of it to create fantasy worlds that were intriguing. 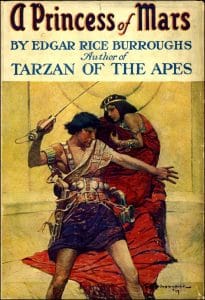 Burroughs was science fiction(ish). There are certainly ways and places that we as modern readers would point it some issues but, on the whole, there are some really smart ideas in the stories. For instance, in the Mars series, John Carter is stronger, faster because there is a different level of gravity on the planet Mars than the Earth he is used to. In some of his less let known stories, he explores what the inside of the Earth might be like.

Ray Bradbury called Burroughs one of the most influential writers ever, largely due to the way that Burroughs introduced romance and adventure into the canon of pulp novels that were written towards young men. Even modern creators, like director James Gunn of Guardians of the Galaxy talk about the influence and vision of Burroughs.

One of the nice things about old school nerds is that their works are widely available. For instance, 30 of the novels of Burroughs are available on Kindle for $1.99! And there are things like the amazing comic that was penciled by the icon Joe Kubert, which is being released as an omnibus in August.

D&D 5e Dragonborn Barbarian: A Look at the Race and Class