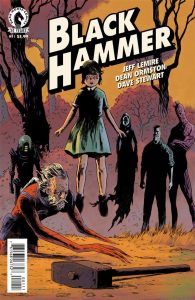 Introduction to the Comic  Abraham seems to be about his morning chores on a farm, but its not been his whole life.  He’s only been at it for ten years, and its the anniversary of the beginning of his new life.  He’s come to love this new way of life, but Gail seems less than satisfied as she angrily takes to the air in flight.

A robot, an alien, and a mumbling man who is able to phase through the floor are at breakfast when Abraham enters the farmhouse.  The alien (Barbalien) joins Gail on the barn roof and reminisces about the way things were…when they were superheroes.

The robot (Talky Walky; so named by the clearly eccentric man who phased through the floor earlier aptly named Colonel Weird) is at work building a probe that he hopes to use to “make contact” with something or someone beyond the perimeter of the nearby town.

Abe, Barb, and Gail make a trip into town for supplies.  Barb is approached by the local pastor and invited to church.  Barb is polite with the pastor’s pitch, but explains that he think’s his churchgoing days are over.  Meanwhile, Gail, who is about 9 years old, gets picked up by a local cop for shoplifting cigarettes.  The cop accosts Abe for not watching after his granddaughter, and when the cop gets a little verbally aggressive, Abe has flashbacks to his own crime fighting days.  He could easily take the officer, but he walks away.

Back at the farm, the gang circles up around a hammer and Abe reminds them all of the great sacrifice its wielder made to afford them the life that they have – no matter how they feel about it. 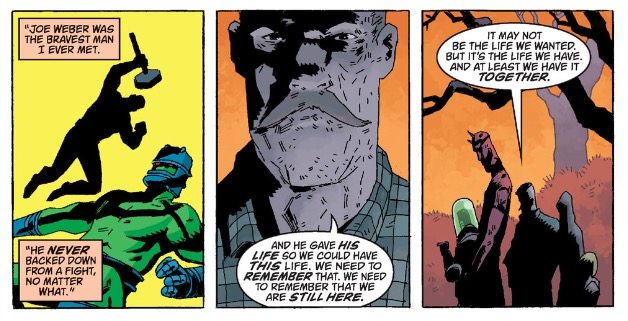 The comic closes with a reporter writing up an article on the ten year anniversary of a group of heroes successfully defending the Spiral City from the Anti-God and then vanishing.  Most people believe the heroes were merely myths but she knows better as she is the daughter of Joseph Weber – The Black Hammer.  She vows to find them.

Why Should You Care?  Because Jeff Lemire, that’s why.  We’re big fans of him here at Nerds on Earth.  We think he is one of the best storytellers out there and Black Hammer #1 looks to prove just that.

Who are these heroes?  Are they trapped on the farm?  What happened to The Black Hammer?  And perhaps most intriguing of all:  What happens to the heroes if his daughter successfully tracks them down?  Will she ironically undo the sacrifice her own father made that Abe so strongly defended?

It seems like at least one – Gail – would love to go back to the way things were, but what of the others?  And is the world ready for them?

I’m eagerly awaiting the answers to all of these questions in the pages of Black Hammer.  Definitely a highly recommended book!

The Flinstones #1 by Mark Russel and Steve Pugh 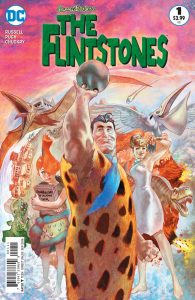 Introduction to the Comic  It opens in a modern day museum with a curator or tour guide explaining its most popular piece:  A stone age man from Bedrock Valley.

Transition to a familiar looking Fred Flintstone – in his trademarked black spotted orange onesie with his blue tie – in the office of his boss Mr. Slate at the quarry.  Slate puts Fred in charge of several neanderthals; highlighting their impressive strength and lack of understanding of money and promising that if Fred can get them to sign on at the quarry he’ll be promoted to foreman.

Fred and Barney take them out for a night on the town before their first day at work – which they hate.  When they receive their first day’s pay, they ask what they’re supposed to do with this “money” and Fred replies, “Buy something someone else hated making.”

Mr. Slate has the Flintstones and the neanderthals over for a hot tub party at which he flaunts his riches  and hedonistic/vainglorious philosophy and lifestyle.  At one point, Slate offers a fine necklace to one of the neanderthals if he’ll go slay a nearby mammoth for a barbecue.  He falls into the ice when the mammoth rears in fear and ends up in the museum.

Fred doesn’t get the promotion after the other neanderthals express a lack of interest civilization.  One remarks, “…it seems like the whole point of civilization is to get someone else to do your killing for you.”

There is also a really great plot focus on Wilma Flintstone that gives her more depth and weight than the beloved TV show ever did.  I won’t get into it here, but it is both very powerful and takes a jab at explaining the handprints we (meaning in our reality) find in caves.  Pretty cool!

Why Should You Care?  Honestly, I was pleasantly surprised by the quality of this comic.  I went into it expecting the TV show, and while you get a healthy dose of the cartoons humorous flair, there is a lot more to this than hijacks and bowling.

Fred feels stuck in life.  At one point the neanderthals ask him about his trademarked blue tie and Fred says that he once read a book that said you should dress for the job you want instead of the job you have.  They follow that up by asking how long he’s been wearing that tie, and you can feel Fred’s weariness as he says fifteen years.

Fred and Barney are also veterans of the violent war with natives that secured Bedrock for their race.  Think about that for a second…This comic makes two fairly heavy handed references to the existence of race and even racial stereotypes and conflicts.  Didn’t see that in the cartoon.  There’s even a depiction of PTSD as Fred and Barney stop by the local VA for a support group meeting.

This is a very grown up Flintstones comic, and I totally dig it.  The whole gang looks to be set for some serious character development.  You’ll still get a couple of chuckles, but if issue #1 is any indication, we’re in for the Flintstones’ real life…not the parody we loved in the cartoon.  I’m intrigued and will give at least a few more issues a go.

How Marvel Built Such an Impressive Movie Universe