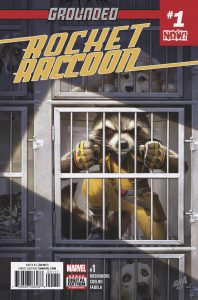 Introduction to the Comic  For those looking to pick this up without having stayed current on all things Guardian of the Galaxy, here’s what we missed according to the credits page:

In a cataclysmic battle on earth, the Guardians of the Galaxy lost their ship which Rocket loved deeply, in part for its ability to take him far away from earth.  Rocket blamed the Guardians’ leader, Peter Quill, for stranding them, and some of the others were made about less important thing.  So they went their separate ways… 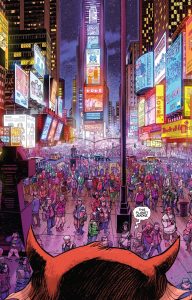 remaining inconspicuous.  That is in part due to his mammalian rodent appearance (variously and hilariously mistaken as a hedgehog, a skunk, a rat, a badger, and best of all: Squirrel Girl) and his choice of activities.

Eventually the cops pick up his trail after he robs a fast food restaurant to feed a starving veteran and confront him in the subway system.  When the force against him escalates from beat cops to SWAT in riot gear, things are looking to get a little hairy before the Human Torch whisks him away.

After a crash course on the concept of a pet (“You own him?  Humans think they can own other living beings?“), Rocket finds himself at a bar and unexpectedly runs into an old acquaintance: A Shi’ar named Ra’Chaun.  After commiserating over not being able to leave the planet, Ra’Chaun suggests he might just know a guy who could sneak Rocket off Earth.

Rocket visits someone named Mr. Soft Teeth who turns out to be a Skrull.  Regardless of either’s species, the two begin to hash out a deal when the Skrull’s head is sent flying and a figure steps forth from the shadows clutching the murder weapon…The Skrull’s decapitated head says, “Run, Raccoon. Run.”

Why Should You Care?  There is a whole lot of fun in this issue.  Rocket’s obvious culture shock is the force behind most of the jokes, but they totally work.  I’d imagine that the writers are smart enough to know that culture shock can’t be the only source of humor, but they will definitely keep the humor dose high throughout the series.

Seeing Rocket all by himself is a new experience

for me personally.  At the very least he usually has everyone’s favorite sentient plant person by his side, but Groot is nowhere to be seen.  He is flying solo in an unfamiliar world and he wants nothing more to leave it in the rearview mirror of the next spacecraft bound for Bahat.

And he was seemingly close to achieving just that before the assassin killed his travel agent!  I’m guessing Rocket will be grounded on Earth for a while, and given the humor and the well-presented action sequences (though few in this issue), I’d gladly continue to read up on his exploits and shenanigans. 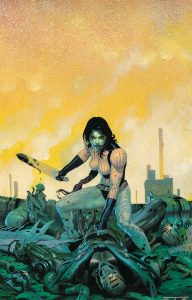 Introduction to the Comic  From the credits page:

Before she was a Guardian of the Galaxy, Gamora was an assassin-in-training and ward to the mad titan, Thanos.  Orphaned by the genocide of her people, Gamora was raised by Thanos to kill without mercy and without conscience.  This is how she became known as the deadliest woman in the galaxy.

That pretty much gives you the setting in a nutshell.  We’re getting a look at Gamora’s origin story, so we pick up with her serving under Thanos.  The book opens up on Gamora’s “birthday,” which is really the anniversary of the genocide of her people, the Zen-Whoberian.  Thanos’s gift to her this year:  The opportunity to exact her revenge on the people responsible for the genocide – the Badoons.

She makes quick and dirty work of the entire Badoon Brotherhood (the royal line) while Thanos and her “sister” Nebula attempt to retrieve an artifact called The Elemental from the Badoon’s vast stores of treasure.

Back on the ship, Nebula instigates a fight with Gamora which continues until Thanos arrives on the scene and scolds Nebula telling her that Gamora is “worth more” to him than she is and “Should Gamora ever die by your hand, I will see you dead myself.”

Nebula returns to torturing a Badoon Minister of Information for something useful about The Elemental, but he gives her something else:  The Badoon royalty is survived by a daughter who is currently living on the planet Ubliex.

Nebula uses this information to trick Gamora into finalizing her revenge by descending to the planet which infuriates Thanos because “no one leaves that place.”

Why Should You Care?  If you’re even remotely interested in either of the Guardians movies, this would prove a worthy addition to your reading rotation.  It looks like we’ll get some serious character development on the enigmatic assassin Gamora. 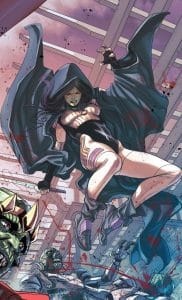 Everything is on point in the issue:

Gamora’s is a backstory I could care about.  I know that sounds kinda odd, but I am just much more interested in her story before the movies (since that is my primary exposure to her and the other characters) than I am Rocket’s, Groot’s, or Drax’s; and it looks like we’re going to see plenty of Star-Lord’s backstory unravel as part of the movies.

That being so, this book scratches an itch that I have.  If you find yourself in the same boat, this is an easy decision.  Consider it the promise of a little more punch when Gamora and Thanos come face to face in the movies because that is a certainty.

Turned out to be a Guardians of the Galaxy month at the comic shop (there was also a new Star-Lord #1!).  What did we leave on the shelves that we need to add to our long boxes? Tell us on Facebook.

Guardians of the GalaxyRecommendations from a Comic ShopRocket Racoon
Share