One of the things that has been interesting to watch Wizards of the Coast do is to change how they release some of the larger products in the Dungeons & Dragons 5e line-up. In the past, new books would typically be very focused towards either the player or the dungeon master; from a purely marketing standpoint, that feels like you are always releasing a product that at least some of your audience won’t be looking for.

So, Wizards of the Coast seems to be trying to create a hybrid product that serves both DMs and players well. The latest book release Volo’s Guide to Monsters is just such a book. Clave wrote about this whole idea well here and you should definitely check out his thoughts.

But today, let’s look at 6 of the new playable races for characters and how you might choose to develop a character from them. We look at the other 7 in another post. 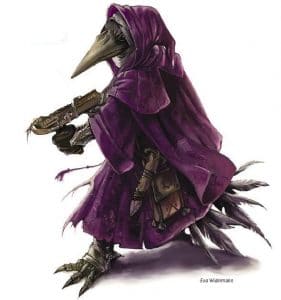 Kenku. This bird-like race seems like they were made to be rogues. They come with skills that lend themselves to being a thief or a criminal, with the gift of forgery and the ability to mimic any sound.

The role playing note in the guide is one that we should all take note of. The last thing we want is Kenku who can only quote Adam Sandler movies. The lack of being able to speak could make for an interesting roleplaying experience. That said, the challenge of taking on a character such as this could make for some stellar roleplaying.

Tabaxi. Some people would like to play a cat-like race. And unless you are talking about a Thundercat, count me out. This race is interesting with its built-in claws and high Dexterity bonus. But, I am not a cat person. And the idea of having to roleplay one genuinely creeps me out.

Lizardfolk. Consider the Lizardfolk to be the crazy people who you’ve seen on Swamp People. They are weird, have sturdy constitutions (+2) and can do things as survivalists that you’ve never dreamed of. Creepy side effect: they eat the dead they kill and, if they are honest, they might munch on you as well once you die. But it could be fun to build a warrior or cleric of this race. Roleplaying this race as a character could be a lot of fun, letting you really lean into the weird and odd quirks; just be careful that you are still considered an ally and part of the party, not an annoying PC they are perfectly willing to let die at the first chance they get. 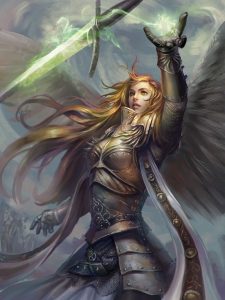 Aasimar. I am about to start a Roll20 campaign and I went with an Aasimar Warlock. This race is basically a supernaturally touched angelic like race, complete with wings that show up when needed.

The role playing potential lends this type to a great paladin, as one who is at work to change and right the wrongs of the world. The boosts to Charisma and Wisdom make that an even more likely choice. There is some talk that this race may be the most overpowered released into 5e and I am curious to see how that plays out.

Triton. If you want to play a Triton, you basically are the kind of person who thinks Aqua-man totally belongs in the Justice League. And this race does have some incredible advantages if your campaign will be near water. So, play someone from the lost city of Atlantis, using the strength, constitution and charisma bonus to make yourself into any class that needs a well balanced character.

The roleplaying potential with this one is stellar, as you can go from being an ambassador of your people to being someone who was kicked out and shunned from your people. Both can make for some great roleplaying. 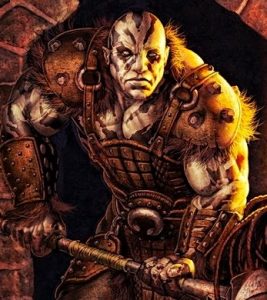 Goliath. Goliaths are a favorite even as some people have called them the most underpowered of the races. When you add in their natural strength, constitution and mountain upbringing, a Goliath could potentially be any class relatively well.

I started a Goliath, making him a ranger with both range and up close fighting skills and have been super pleased with how he has done as a low level character. In terms of role playing, I choose to have him be the runt of his tribe, abandoned in a particularly bad winter. There is something fun about being the tiniest one when you are 7 feet tall and weigh 285 pounds.

Next up is part 2 of our post that looks at the Firblogs, Orcs, Bugbears, Goblins, Kobold, Hobgoblins and Yuan-ti.