Earlier this week, we looked at half of the playable races in the latest Dungeons & Dragons 5th edition product, Volo’s Guide to Monsters. This time we want to finish off the list and suggest some potentially interesting class, race and role playing combinations. 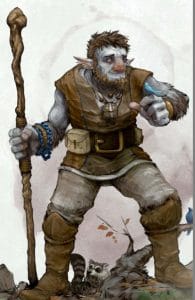 Firblogs are if hobbits had a steady, steady dose of steroids and loved the forest. These large race creatures have a deep love for the woods and live a long time. So they have a high wisdom bonus (+2) and are naturally strong (+1). In roleplaying terms, this race feels like it is locked in 2 boxes.

Box #1 is the adventurer who is out in the world to try and save his forest world from the encroaching evil of this world; ideally, this may be a cleric or druid.

Box #2 is a warrior who is going to rain down destruction on the world because Box #1 adventurer wasn’t successful and the world killed Box #2’s world.

Orcs. I want to play an Orc so bad because I want to turn the tables. How many times has an adventuring party just brought mayhem and massacres to Orc families? Even first level characters wipe out orcs. So this could create an interesting roleplaying opportunity as a neutral or even evil orc, who is around simply to bring mayhem to as many people as possible.

The general fighter categories make for likely classes as a fighter, ranger or barbarian would all benefit from the orcs’ Strength and Constitution bonuses. The other way to roleplay an orc would be to choose to be the loner that rejects all the old orc ways, but you better make that backstory believable, as they mainly want to rampage, destroy and conquer. 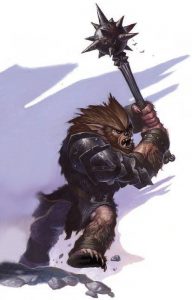 Bugbears. Like the Orcs, bugbears are generally a monster that adventurers are attempting to destroy. But they make for fierce warriors, having both Dexterity and Strength bonuses. When you add in their ambush ability (an extra 2d6 when you have surprised an opponent!) as well as an ability to add one extra die of damage once per short rest, and I would want to class this race one of two ways: a sneaky rogue who brings massive amounts of damage early or a straight up barbarian, who can use the extra long reach of the tall bugbear.

Kobolds are the tiny dragon(?) cousins. This lizard-like race are small creatures, only growing up to 2.5 feet tall. But their dexterity and charisma race bonuses, it lends to all kinds of possibilities. I think it unwise to put them into any kind of fighter roll, but a rogue or a magic user might be a fun fit.

Role playing wise, it provides some opportunity. What about an old, aged, physically weak Kobold who has lost his dragon master and is now wandering the world? Seems like it may have some fun potential.

Goblins are potentially a very interesting class to play. Most goblins live short lives, even to the point of not being given a name. But with their dexterity bonus as a race, as well as some of the other options available in the subraces (Greenskins, Boggart and Tinker), this playable race may lend itself the most to having some incredible backstories that would work with nearly any class.There is a ton of potential to make a small, power hungry little one that can kick some tail.

Hobgoblins. The hobgoblins are quite simply built for war. They are meant to be part of large armies and groups raging against whole towns and villages. With the Constitution and Dexterity modifier that they get, along with the ability to be proficient in 4 weapons, this race feels like it is built to be a superb fighter class. Another potential option would be to create a Hobgoblin Scout, giving him/her a ranger class and carefully choosing fighting styles as the character advances. 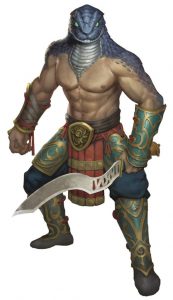 Yuan-ti. The Yuan-ti are an odd mix of lizard and human. Magic seems to be a natural part of this character, with 3 additional races spells being known, in addition to a +3 to armor class, this feels like a natural direction to make a warlock or sorcerer.  The wildcard choice might be as a rogue, where partnering with the magic might create for some interesting opportunities. The Charisma score bonus and dexterity bonus seem to lend themselves this way.

This race has some potential interest from a roleplaying perspective, similar to the way someone might play a half-orc: which side of its nature will win out best?

So out of all the new playable races, which direction would you go? What race and class combination do you think will be the most successful in a campaign? What would the character’s backstory be?