After finding out that none of our heroes thought to take Giant as a language in an AP called Giantslayer (Umlo to the rescue!), they’re beckoned to show themselves by a motley crew of monsters.  Found out how that encounter goes today in episode 84 – Heads ‘Em Off at the Pass!

The party attempts a parlay with the quarreling voices they hear up ahead on the winding path through Minderhal’s Valley. 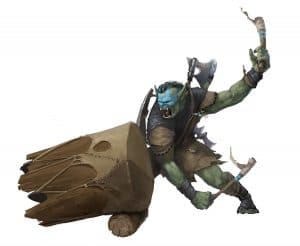 of the 3.5 edition of Dungeons and Dragons. You can learn more about Pathfinder here or get your
own copy of the 1st book of the Giantslayer adventure and start a Pathfinder campaign of your own!