As a new year starts, one often looks back at the year that has finished to reflect on things, both good and bad. This time around, there may be the temptation to skip those reflections. 2016 may be remembered as one of the worst years in recent memory. Right up to the bitter end, the year wreaked havoc with the deaths of Carrie Fisher, her mother Debbie Reynolds the very next day, and so many more throughout the whole year.

But that doesn’t mean we can’t find the good as well. For me, I can look back at some great gaming experiences throughout the year. Since March, I’ve been running one of my weekly Pathfinder groups through the Mummy’s Mask Adventure Path. Currently, they are about halfway through (they will likely complete the third of the six adventures in their session today).

There have been many great experiences in this campaign, but one from a couple months ago stands out. It’s one of those great gaming moments that the group continues to talk about for ages afterwards. This is despite the fact that it was actually a pretty disastrous moment for the party, resulting in the deaths of two out of five player characters.

Death in the Library: A Pathfinder Campaign Story 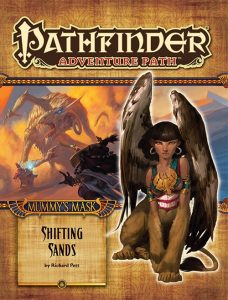 Warning: Some spoilers for Shifting Sands, the third adventure of Mummy’s Mask, follow.

The party was engaged in important research in the Great Library in the city of Tephu in the country of Osirion in the Pathfinder Campaign Setting world of Golarion. The area of the library they were in was not open to the public and they had had to go through quite a lot just to get permission to be in there.

This part of the library was guarded by a ceustodaemon, something that irked the party’s paladin no end. While the party was fairly certain they could defeat the evil fiend if necessary, they knew that to just attack it could cause problems with the local authorities and result in them losing access to the library. The greater good required that they find the information they needed in the library and thus they couldn’t risk a fight with the daemon.

While in the library, they encountered a woman studying there, apparently also with the necessary permission. They were somewhat suspicious of her, but let her go on with her own research while they did theirs.

They completed their research and left the secret section of the library. Once out, the paladin inquired about the other woman conducting research in there, and the party was not entirely surprised to learn that nobody else currently had permission to be in there. The woman must have forged her permission papers to get past the daemon.

Seeing an opportunity to fight evil (and maybe also give him a go at the daemon), the party paladin offered to go back in and deal with the intruder, to which the library authorities agreed. However, not all the party agreed. In particular, the group’s rogue was dead-set against the idea, arguing that they had a more important mission and couldn’t risk getting into an unnecessary fight. She argued that they should just let the library staff inform the daemon and let it deal with the intruder.

The paladin would have none of it and was determined to go back in whether the others went with him or not. Ultimately, most of the group went back in, but the rogue refused and stayed behind.

Inside, they informed the daemon what had happened and, temporarily allied with the daemon (to the paladin’s annoyance), they went to confront the intruder—who turned out to be a medusa in disguise. The ensuing battle did not go well. They had one moment of good luck early on when the medusa’s gaze actually turned the daemon to stone (good as far as the paladin was concerned at any rate), but after that, things just went downhill.

The medusa successfully turned both the cleric and magus to stone before the paladin and fighter could finally take her down. The two of them exited the library, crestfallen and unable to even transport their petrified companions out with them. When the rogue learned what had happened, she proceeded to give quite the lecture to the paladin, blaming his hubris on nearly resulting in the complete failure of their quest.

Now, intra-party conflict is something GMs should monitor carefully. Sometimes character emotions can spill out into the real world and become player emotions. But this wasn’t one of those circumstances. The players involved had a great time, particularly the rogue’s player—normally one of the quieter, less outspoken players in the group—who got to give an awesome speech totally chewing out the paladin, and the paladin’s player fully admitted his character deserved it.

In the end, they were able to get some help to retrieve their petrified companions and restored the cleric to flesh. The magus’s player decided that they would prefer to create a new character, so I ruled that the stone to flesh spell failed on their character without requiring the usual saving throw.

As I said above, the players still talk about that moment, and I suspect they’ll continue to do so for some time—at the very least, until some even more awesome moment occurs.