Understanding Golarion, the World Where the Pathfinder RPG Lives

The Pathfinder roleplaying game is set in the world of Golarion, which is large and varied. Golarion contains a multitude of different lands, peoples, and organizations.

There are also a large number of books available describing all these things, and it’s a bit overwhelming knowing where to start. As we discussed last article, players will want to start with the Inner Sea Primer, while GMs will want the Inner Sea World Guide.

However, where should you go from there if you want to fully explore the setting of Pathfinder?

The answer to that question will depend a great deal on the needs of your particular campaign. The following is a very broad overview of the books available and by no means covers every single one. However, it will hopefully give you an idea of the options available to you in getting your campaign under way.

Many of the books available cover specific areas of the Inner Sea Region. Some books cover just a single, but prominent, city. City of Strangers details the mysterious Kaer Maga, while Magnimar, City of Monuments covers one of the most important locations in Varisia. Generally, these are cities where it’s possible to set an entire campaign—locations that your PCs may rarely, or maybe even never, need to leave. 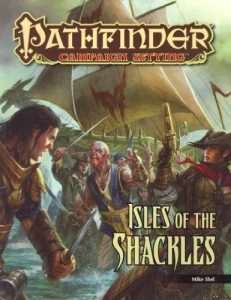 Other books cover entire countries or regions, and there are certainly many such places across the Inner Sea. Most of these books mention the country or region in the title of the book, such as Numeria, Land of Fallen Stars or Isles of the Shackles, but not all do, such as Rule of Fear, which covers the country of Ustalav. However, it’s always possible to determine where the book covers by taking a quick look at the description on the back cover.

Of course, to date, not every land in the Inner Sea Region has had a book published about it yet. This may mean that, if you’ve chosen a specific location mentioned in the Inner Sea World Guide (such as Geb, Nex, or Galt), you might not be able to find a book about it. In such a case, you should simply feel free to make up whatever additional information you need.

Indeed, this is always something you can do, even if multiple books have been published about a part of the world. Remember that once you start running your own campaign, the world is yours to do with as you and your players please. You’re free to change things. 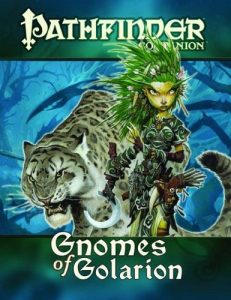 And not all the books about Golarion cover specific locations. Many of them cover specific themes, such as the races and monsters of the world. The Player Companion books include books like Gnomes of Golarion and Dwarves of Golarion. In fact, all the core races in the Pathfinder Core Rulebook have such an “of Golarion” book about them.

But you can also find books like Goblins of Golarion and Kobolds of Golarion. Aasimars and tieflings get treatments in Blood of Angels and Blood of Fiends respectively. Other “Blood of” books cover numerous other races as well. These books give you details about the societies and cultures of these races, as well as new options (like feats, traits, and spells) for characters.

Inner Sea Races is a 256-page hardcover book that provides a ton of information on all the major (and many less major) races that can be found in the Inner Sea Region. This book is focused primarily on details like history and culture, though it also has a small amount of new character options as well.

Other books cover things like religion. Faiths of Purity, Faiths of Balance, and Faiths of Corruption are player books that cover the good, neutral, and evil gods respectively. They cover the basics of these faiths and provide new options for characters who follow these gods. 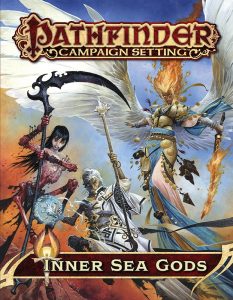 Inner Sea Gods is another hardcover book. It provides an in-depth look at the 20 principal deities of the setting, as well as an overview of the many other gods that exist as well. Inner Sea Faiths (a 128-page softcover) carries on from Inner Sea Gods by providing in-depth information on several of those other gods as well, while Chronicles of the Righteous has a similar look at the empyreal lords—the demigod-like beings that rule over the good extraplanar races.

If you’re looking for information on the evil equivalents of the empyreal lords, there’s the three-volume Book of the Damned. Volume One covers devils, Volume Two demons, and Volume Three daemons.

There are also books about monsters, such as Mystery Monsters Revisited or Dragons Unleashed. Some of these books give you details about the histories and cultures of various monsters, while others provide you with examples of specific individuals, along with their hideouts or lairs.

Other books, like Adventurers Armory, the Technology Guide, or Artifacts & Legends, provide you with campaign-specific equipment for PCs to outfit their characters with or for GMs to include as treasure. 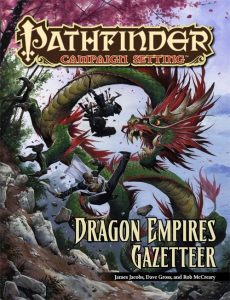 The vast majority of the campaign setting is focused on the Inner Sea Region. However, this is not the entirety of the world of Golarion. If you wish to move your campaign beyond the Inner Sea Region, there are a few books that venture this way, though not many. Dragon Empires Primer and Dragon Empires Gazetteer introduce the continent of Tian Xia, Golarion’s equivalent of Asia, and provide broad overviews of numerous new countries and lands to explore.

Distant Shores takes a look at six cities from all across the globe (but none in the Inner Sea), providing a glimpse at the kinds of peoples and cultures that exist in the rest of the world. Distant Worlds actually moves beyond Golarion entirely, and takes a look at the other planets in Golarion’s solar system.

As I said, this is only a broad overview of what has been published for the Pathfinder Campaign Setting. While I have mentioned many books by name, there are many, many more that there simply isn’t the space for. You should take the time to browse through the links above to see what’s available. You can visit Paizo’s official website for a full catalogue of what they offer. There’s enough out there that you shouldn’t have any problem finding something that fits the style of campaign you’re looking for.

Of course, once you have a setting, you’ll need adventures to run there, and that’s what we cover in our next article. Happy gaming!

Mistakes Were Made: Suicide Squad Edition