Introducing and Understanding Golarion, the Fantasy Setting of the Pathfinder RPG

The campaign setting is one of the most important components of a fantasy roleplaying game, Pathfinder included. The setting helps to define the style of the campaign and adventures. It gives a context to everything that happens to the players’ characters, and gives them the opportunity to form relationships, and make names for themselves.

There are a multitude of possible settings for role playing games. The limit is really only your imagination.

Last time, we talked about designing your own campaign setting. However, that can be a difficult task, and not everyone has both the time and desire to do it. In this case, there are numerous premade campaign settings available for purchase from various different companies. 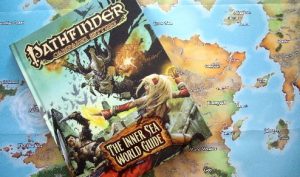 Prominent among these is the world of Golarion—the official Pathfinder setting from Paizo.

But much like the rules for the Pathfinder game, knowing where to get started for Golarion can be a bit confusing. There are a lot of books available—even more than there are rulebooks.

The first thing to do is to become familiar with the different lines of Pathfinder books that Paizo publishes, as there are several. Each line is identifiable by the logo on the book covers. The setting neutral rulebooks that we’ve covered so far have the “Pathfinder Roleplaying Game Logo”. The principal lines for Golarion are the “Pathfinder Campaign Setting” and “Pathfinder Player Companion” lines, although the “Pathfinder Adventure Path” and “Pathfinder Modules” lines also contain information about Golarion. 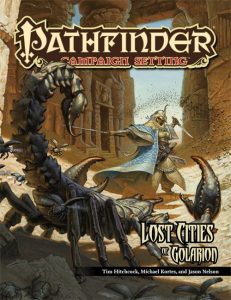 The next thing to point out is that, while I (and others) will often refer to it as the world of Golarion, this is not the official name of the setting. The official name is simply the “Pathfinder Campaign Setting”. Golarion is the name of the planet that the campaign principally takes place on. Indeed, the setting is focused primarily on an area of Golarion known as the Inner Sea Region. As such, while you will often here people talk about the “Golarion setting”, you won’t see the word “Golarion” on the cover of the various setting books, except in a few cases when it happens to be part of the title of the book.

The world of Golarion is what is often referred to as a “kitchen sink setting”. That is, it contains a little bit of everything. The Inner Sea Region contains a multitude of different lands and peoples that allow for numerous different kinds of adventures.

One of the great things about Golarion is its sheer diversity in the cultures, races, and ethnicities present. It allows you to be just about any character you can imagine. 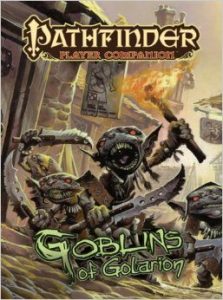 If you’re going to be a player in a game set in Golarion, you’ll want to start with the Inner Sea Primer, which is part of the Pathfinder Player Companion line. You may also want to pick up another Player Companion book that focuses on the area your character comes from. You should consult with your gamemaster about this.

The Inner Sea Primer provides an overview of the Inner Sea Region. It has brief descriptions of each of the countries, along with a couple of character traits for each one. The book also contains advice on creating characters, with information on races, fighting styles, magic, and deities. 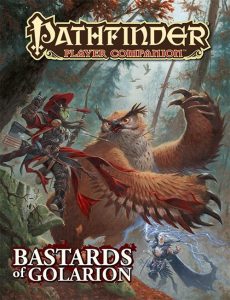 The various other books available in both the Pathfinder Campaign Setting and Player Companion lines look at more specific things within the setting. Some books cover specific lands, while others are focused on specific races or monsters. There are a lot of options available. However, just like with the rulebooks, it’s not necessary to have all of them. You can pick and choose the ones that fit your specific campaign.

For example, if you’re running a game set entirely in the country of Ustalav (a gothic horror style setting), you’ll probably want Rule of Fear, which details that country, but you can probably ignore Osirion, Legacy of Pharaohs. Of course, it you’re running a campaign that will span many different lands, you may want to pick up a wide variety of books. 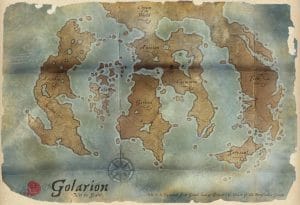 Golarion is a wonderful RPG setting and Pathfinder books are likely available at your local game shop or via Amazon. Please reach out to us should you have any questions about the world of Pathfinder.

In the next article, we take a closer look at some of the specific options available, as well as what options exist for moving your Golarion campaign beyond the Inner Sea Region.