When the New Mutants burst on the scene in the Marvel Universe in the 1980s, many thought it was going to be a light-hearted comic about the younger mutant team that would be training at the X-men’s Xavier Institute. That conjecture seemed to be a reasonable one given the set-up graphic novel and launch of the new series.

However, New Mutants quickly demonstrated an ability to go very deep and very dark, even as it examined the lives of its young protagonists. And no storyline demonstrates that more than the Demon Bear Saga. 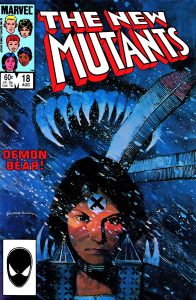 The Demon Bear Saga originally ran in New Mutants #18-21. The story centers around Danielle Moonstar, a Native American character whose powers are both mutant and magical in ways that writers use at various points. (And she later becomes an Asgardian Valkyrie. For real.)

In simplest terms, Danielle, who was going by the codename Psyche at this point, has the ability to pull forth images from the desires of other people; most often it is used to bring forth the deepest fear of her enemies.

Danielle has been having dreams about a bear, who somehow killed her parents, and is now hunting her. After seeing her run some scenarios in the Danger Room in an effort to prepare, she eventually winds up in a battle with the Demon Bear in a storm, and the New Mutants get involved.

Here are some of the reasons that this story is important and worth checking out: 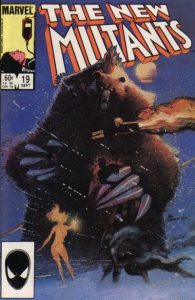 Demon Bear isn’t a perfect story to modern readers. At the time, Marvel regrettably played a little fast and loose with Danielle’s Native American heritage, sort of making her a melting pot of all Native American tribes. But, I also think that was not and is not a malicious piece of work; given that, I think a modern reader can still enjoy the work that is so, so good in the Demon Bear Saga.

The work is available in this collection, available on Amazon, which also collects some later, weaker stories that involve the Demon Bear. Also, the three most important issues are available on the Marvel Unlimited app, which we are big fans of here at Nerds on Earth.

Introducing and Understanding Golarion, the Fantasy Setting of the Pathfinder RPG

Square Enix Returns to Form with I Am Setsuna, for Better or Worse