It is no secret that Clave and I here at Nerds on Earth hold the Chris Claremont run of the X-Men to be one of the best things ever produced in pop culture. Imagine one guiding voice that shaped some amazing stories for over a decade in a medium 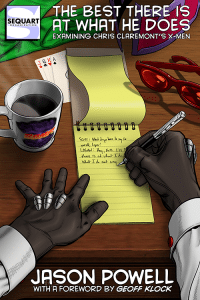 that was, by the end, one of the most popular mediums in existence at the time. And in Sequart Organization’s book The Best There is at What He Does by Jason Powell is a phenomenal guide and deeper dive into that era, as well as a great primer.

First off, if you have never read through the Claremont era, Powell’s work in the first 90 or so pages of this book should be your reading companion. This section is a great set-up piece for what is happening in the books and why it matters.

From Giant Sized X-Men #1 reflections, which eventually gave Claremont all the pieces and characters to begin his run through Uncanny X-men #167, Powell makes a case for what each storyline means and how it shapes the later works.

If I had one concern it is that there isn’t enough art in the book. While Powell is great at crediting artists and how they helped shape these stories, we don’t get to see a lot of it to see for ourselves. For instance, Dave Cockrum’s love of Nightcrawler and how that helped shape that character into a swashbuckler is discussed and compared to John Byrne’s love to Wolverine, and how that character moved to the forefront. In both cases, I wanted to see examples and they aren’t in the book and I recognize that citing certain panels of comics would be immensely tedious. That said, this book in one hand and a Marvel Unlimited app in the other would make for an excellent pairing. 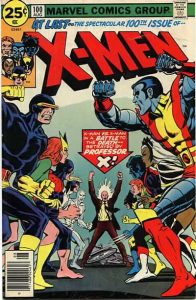 One of Powell’s more fascinating explorations comes from Claremont’s work in developing and maturing the characters. Given that in the backdrop of the current comic book culture, it was refreshing to hear a voice that advocated for real growth and change in the characters. The X-men under Claremont’s watch grew older, changed, shifted and were becoming something different. Cyclops left the team. Storm became the edgier, punk character.

In a world where modern comics is working to do the opposite, Claremont was an advocate for real character change and growth. The idea of bringing the original team into the future for a long term arc where they are running around again as teenage versions of themselves doesn’t seem to vibe with what Claremont saw as the role of the characters; to him, all life progressed and ended. Magneto could potentially become a real, honest, remorseful hero in Claremont’s world, and that arc in particular was reversed as quickly as possible once Claremont was on his way out, despite years of work and stories to the contrary. 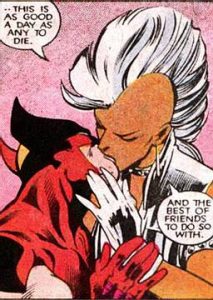 All of this isn’t to say that there are places where I radically disagree with Powell. His ideas around Wolverine aka Logan strike me as written from the benefit of hindsight and looking at what Logan became. At one point, he calls Logan Storm’s “pet psycho” and I find that characterization to be so far from the truth of the comics at that time.

The lack of focus on Claremont’s tangential projects, especially New Mutants and Excalibur make for a less than complete focus over the whole universe that Claremont was building and those other pieces were important, though I also recognize you can only focus on so much.

The book also brings about some sadness as it talks about the end of Claremont’s run. It is impossible to not have strong feelings as you watch the shift happen and Claremont realized it. The section on his swan song, X-men #1-3, is especially enlightening and worth checking out. Claremont doesn’t get the credit he deserves, even as Fox has built a movie franchise around core ideas and stories Claremont helped bring into the world.

All in all, The Best There is at What He Does is definitely worth checking out if you are an X-men fan, a Claremont fan or a fan of Marvel history. Claremont’s decade and a half run on a superhero comic will likely never be beaten in terms of non-creator owned work. If you have never read through the Claremont era, this book would be an excellent reading companion and guide, helping you to understand its richness of story and the world in which it was created.

You can get The Best There is at What He Does here. You should. Please also check out all the other great comic book writing that is offered by Sequart.

(Disclosure: A review copy of this book was provided to Nerds on Earth by Sequart.)

How to Paint Little Bears and Banthas

Comic Haul: Oh no! Hela has found Thor! Look at this cover!