A 1987 classic one-shot you should check out!

By Jason Sansbury On May 22, 2018 Last updated May 21, 2018
1 TwitterReddIt1PinterestFacebookEmailPrint 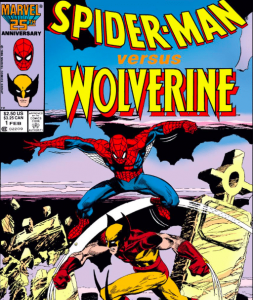 In 1987, you can imagine the editorial room at Marvel working hard to put together 2 of their best selling characters.

Wolverine is nearing the zenith of his popularity, coming on the heels of his Chris Claremont and Frank Miller mini-series, as well as through his exposure in the Uncanny X-Men.  Wolverine quickly became the guy who everyone wants to guest star in their book.

And Peter Parker is always going to be the lead Marvel character, even when sales say otherwise. And the merging of those two characters created a strange one-shot in 1987’s Spider-Man Versus Wolverine.

Now, I can’t imagine that this 65 page adventure was meant to be a one-shot originally but rather it was likely a story meant for another book that they lumped together to make a longer story. You can even see the break lines in the story around the right beats where a normal issue would end. But this story has some things that really do make it an outstanding tale. 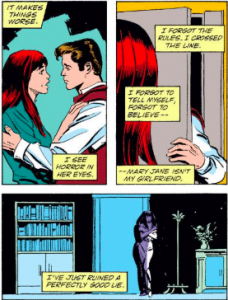 James Owsley wrote this story and the art of Mark Bright really shines. As the world was moving rapidly towards the McFarlane, Lee and Liefeld art era, Mark Bright stands out as a good artist who is capable of telling a good story visually, both in fight scenes, of which there are several and in more tender moments, like some between Peter Parker and Mary Jane Watson and Wolverine and his friend.

Part of why I liked reading Spider-Man versus Wolverine in this era is that it feels like a throwback to a kind of comic we don’t get anymore. It is a really well crafted, poignant story but it isn’t on the scale of something galactic like the Infinity Gauntlet.

That isn’t to say that the stakes don’t matter to Logan and Spider-Man; in fact, the end of the story seems to have some significant ramifications to both characters. But it isn’t epic. It is personal and meaningful and that kind of comic book story got left behind a while ago, at least in the comics I am exposed to.

The story is really built on a premise that would be hard to sell now. Wolverine is tracking down a former spy friend who seems to be taking out their former clients. The Cold War vibe is thick and you haven’t seen anyone really lean into the Logan as a spy plotline in a longtime.

Peter Parker gets involved not as Spider-Man but as a photographer, put on an assignment with a reporter who is hot on the trail of Logan’s friend and the story it would tell.

It is an excellent plot and it lends to some really cool moments, like Spider-Man in East Berlin versus his usual friendly neighborhoods of New York City. Also, this is a world before Spider-Man and Wolverine having both been Avengers, so Logan smells Spider-Man in Berlin and tracks him down. From that we get a pretty awesome panel of Peter Parker web-slinging, having desired to give up his alter ego because of some issues that he was experiencing back in New York.

But in the end, his call, his power and responsibility notion pulls him in, even giving us a funny moment, as the only outfit that Parker can find is an old blue and red Spider-Man costume. (This was set during the post-symbiote but still black and white costume.) 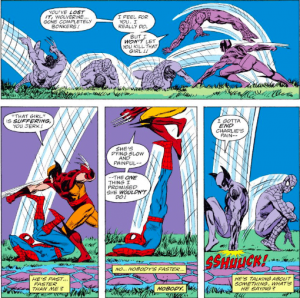 The story has a dramatic twist that I don’t want to give away but it makes the story stand out even more, especially as a part of Peter Parker’s life. It has a heavy tone and consequences that should have impacted the story far past this point and maybe did if you could slot this story into continuity.

Eventually, Logan and Peter wind up on opposites sides of a dispute and it creates for a pretty formidable fight scene. In addition to Bright’s excellent art in the scenes, which gives us the fluid sense of a fight in static panels, there is a part of the writing that I liked: Peter usually holds back.

It is a subtle point but makes sense: he cares about other people, so even against foes, he can’t fully let loose until he realizes Logan and his Adamantium skeleton can take it. It was a small thing but one that made me appreciate this story and the thoughtfulness behind it even more.

Regardless, the Spider-Man versus Wolverine one shot is available on Marvel Unlimited and from the Comixology and Kindle stores for a couple bucks and is definitely worth checking out.