Into the Spider-Verse: A Brave but Accurate Choice for Film of the Year 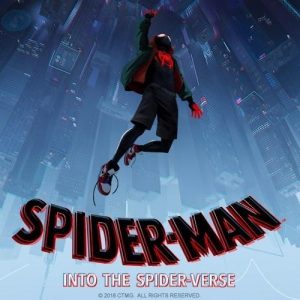 Spider-Man: Into the Spider-Verse should legitimately be considered for all major awards including the film of the year. Full stop.

A few years ago, the Oscars made the change so that more pictures could be considered for the Best Picture, with the theory being that it may allow some more popular pictures to compete. Earlier this year, everyone rightly seemed to think the head nod to the popular pick would be Black Panther. And while T’Challa and company should still be nominated and considered, the Sony animated Into the Spider-Verse should absolutely be considered and, to my ever loving Spidey heart, win Picture of the Year.

It is an excellent story, remarkably executed through powerful animation techniques and my worry is that no one will honor it because of its status as an animated picture.

One of the things that is so great about the story of this film is that everyone gets their own Spider-Man. The main focus of this film is the young Miles Morales, who follows the formula in terms of being bit by a radioactive spider, develops powers and has a clear call to action.

It would be very easy to discount the backstory under the banner of “We have heard this 100 times before, especially in regards to Spider-Man.” Respectfully, I just think it is wrong. Miles Morales is a different character and it shows especially in this film, where we see him contrasted about a whole hodgepodge of Spider-Men, as the multiverse is collapsing. And, for comics and movies, right now, that is a tremendously bold and brave statement. 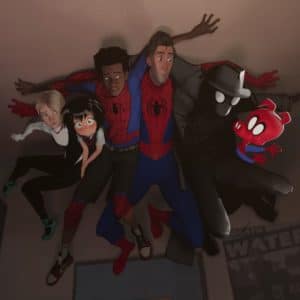 If you watch the comics media at all, you are at least somewhat knowledgable about campaigns that some are holding that want to make sure that the characters we have stay exactly as they are. Marvel did some changes that allowed other characters to take on the rolls of other heroes. Captain America’s title and shield was picked up by the African-American Sam Wilson. Iron Man was replaced by a young woman from Chicago. The Hulk was tied to the Asian American Marvel character Amadeus Cho.

Lots of people disliked this idea and pushed back and claimed it was just diversity for diversity’s sake. While I personally disagree with that assessment, Into the Spider-Verse is a strong, compelling case for how we should allow characters to grow and advance. Over the course of the story, we see a variety of characters take on the title Spider-Man.

The lead in the movie is a high school kid from a bilingual family, who is attending a high end, high achieving school. Miles Morales is a new Spider-Man for a new generation. Likewise, we get introduced to the Gwen Stacy from another multiverse who has powers and is Spider Gwen. And not to spoil them all, we get a variety of options and different perspectives on “Who is Spider-Man?”

And, due to a stellar performance by Jake Johnson, we even get to see more from Peter Parker. Johnson is playing a Spider-Man who has essentially not become the greatest hero but has failed in some ways and has lost his potential. This “Dad Bod Spidey” as NPR’s Pop Culture Happy Hour dubbed him, has his own journey over the course of the movie that is fantastic and has a great pay-off. Even as this movie is passing the mantle on, it honors the past. 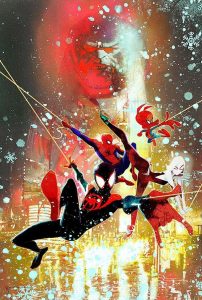 But even beyond that, for comic book fans, there are many things to love in this movie. The most startling is the way that the film uses different animation styles all at the same time to help tell the story. Even more so, there is something deeply satisfying about seeing a comic icon artist like Bill Sienkiewicz have his very unique style come to life in the animated. After the movie was over, I came directly to Marvel Unlimited to look up some of the styles and artists whose work you can see on the big screen. And it does this in part because of the various characters and how they are portrayed.

This “Spider family” is also another tremendous feat for this film. Taking a step back, we can talk about how every character is really just taking their version of Joseph Campbell’s Hero’s Journey. But they are all unique and different enough that what happens is that the tragedy of their stories bind them together into a team. It could have been a very big mess of characters, unsure of their purpose and instead, it is something much different. (And it would be impossible to talk about how much I loved Lily Tomlin’s portrayal as Aunt May, and her turn as a mentor, both in this film and in ones to come.)

The soundtracks for this film elevate it as well. Any great Best Picture nomination usually is accompanied by a great score and this one is great, as well as the contemporary, urban music that fits so well the world of Miles Morales. It helps make the gap between Peter Parker of the 1960s and the Miles Morales of today. Both have been on loop for me since the movie and they are really inspirational!

Spider-Man: Into the Spider-Verse is the best film I have seen this year. While there are others that have been excellent, none accomplishes more unique, interesting concepts than this film, which is especially worthy of praise in an era where the best we seem to be able to do is to remake old things. This animated film is incredible and if it doesn’t get the praise it deserves, it will be incredibly disappointing.

Our Favorite Articles of 2018