I don’t normally get suckered into Marvel crossovers, but when I do, I prefer Spider-man. I just recently binged Spider-Verse, the 2014 tale that features every version of Spider-Man that has appeared anywhere.

It’s a giant skull-crusher of a story, so before I give you a spoiler free summary of the story, I’d like to ask you first if you are sitting down. OK, here goes. 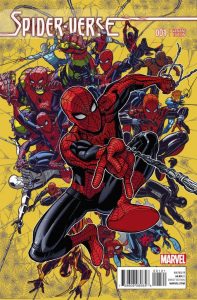 Morlun is known to Spider-Man fans as one of his modern foes. Morlun is also known as one of his deadliest foes, as Peter Parker has only barely defeated him. Morlun’s schtick is that he “feeds” on the essence of spider-themed heroes and is relentless in his pursuit of them. Spider-Verse not only brings back Morlun, but it creatively gives him an entire family and mythos, the Inheritors.

Spider-Verse also expands the Spider-Man mythos in a second way. The Multiverse is a key component if Marvel comics. Marvel zombies know there is Earth-616 that represents the main continuity, then there are an unlimited number of other Earths, each with its own numerical designation. Spider-Verse pulled in the whole multiverse. Different versions of Spider-Man would hop from universe to universe, often picking up alternative versions of Spider-Man to add to the story.

It created a huge cast of spider-themed heroes. Some were a little screwball and didn’t appeal to me personally, but most were cleverly done and felt like fresh takes on the character. It was really fun to see multiple versions of Peter Parker interact with one another.

Spider-Verse also introduced some alternate universe spider chapters that persist to this day and that now have their own regular series. Silk and Spider-Gwen to name a couple, but the cast of spider characters is so interesting I wrote them up in their own post. 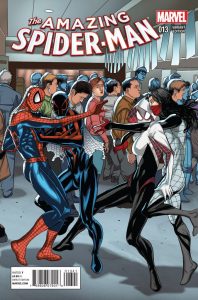 Again, it was a skull-crusher of a story and ended in a very satisfying manner. Dan Slott’s Amazing Spider-Man title carried the bulk of the story. Then Peter David’s Spider-Man 2099 and Dennis Hopeless’ Spider-Woman added nicely to the overall narrative.

I’m still waiting for Marvel to publish some well-done stories that don’t involve crossovers to entice readers into having to buy a dozen titles to get the story. But I suspect I’ll have to wait much longer. [Looks around for a standalone Marvel comic, grows old, dies, decays, trees spring up in corpse soil, grow old, then die themselves.]

But I’m being too hard on Marvel in this regard. As crossovers go, this one was one of the absolute best, so kudos to the editors and publishers involved. While there were a lot of titles you needed to read, most of them added significantly to the story. What’s more, the crossing into different titles made story sense. The fact that the core of the story was different spider-themed heroes teaming up against a common foe tied things together well. 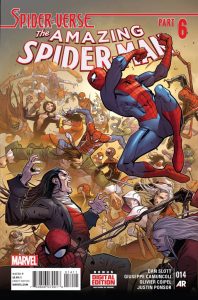 Some old school touches also helped the crossover. On the back page of each comic was one of those sweet old fashioned checklists to help readers track the story and know which comic to pick up next. And editor notes were judiciously used to help readers keep track if something important happened in another title.

I had a great time with Spider-Verse. I briefly flirted with the idea of a Nerds on Earth branded squeegee for cleaning the drool off my iPad as I was reading it.

The Scarlet Spiders issues didn’t resonate with me, the Edge of Spider-Verse ramp up felt too long, and some of the Spider-Verse Team-Up books were hit and miss. But it’s an impossible bar to say that a 30 issue comic book story will hit every beat. But Spider-Verse came darned close. And overall, Spider-Verse is darned excellent. I highly recommend it to any Spider-Man fan.

Spider-Verse is collected in a hardcover. You can get that huge volume plus the Edge of Spider-Verse preview together for about $60 on Amazon. That might seem like a lot, but remember, it’s a skull-crusher of a story and well worth it. I binged it on Marvel Unlimited, which I highly recommend.

A look at the main characters in the Spider-Man Spider-Verse comic event.