Nerd Culture Highlights for the Week of October 23, 2016.

They survey, speculate, and weigh in on 2017’s super hero movies including Deadpool, Wonder Woman, and Aquaman.  We can only expect to see one of these movies next year at this point (Wonder Woman) as the rest are only in the writing stages (if that), but it is fun to keep an eye on these franchises as they mature from scripts to screen.

2.  Benedict Cumberbatch diagnoses The Avengers’ injuries in a fun promo for Doctor Strange.

We love it when marketing for movies gets creative – like that time Marvel told us what Thor was up to during Civil War.  So watching Doctor Strange explain various injuries and how to fix them made us chuckle so we couldn’t rob you of this one!

3.  Ramp up your DnD games with custom Magic The Gathering styled cards for items and spells. 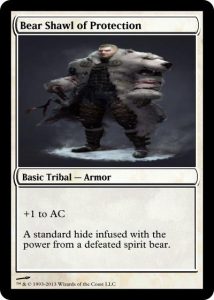 This is a neat and extremely quick tool you can use to generate reference cards for your PCs when they stumble across new spells or items – including magical ones.  A little cooler than just having them write down what they’ve found and what the items do.

It is free to generate the cards and save the images (right click -> save as), but a quick registration will allow you to save cards for use or reprinting later.  The card to the right is one I made in literally 20 seconds for my Goliath Barbarian’s Bear Shawl of Protection.

4.  A fan managed to have his Glenn Rhee obituary published in a newspaper.

Lots of memes have been spawned in response to The Walking Dead‘s season 7 opener, but this obituary was one of my favorites.

5.  What happens when three artists try to design a Mondo poster in an hour…LIVE? 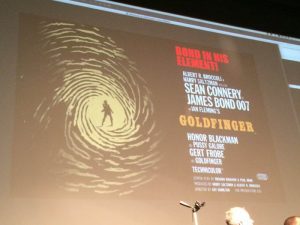 At MondoCon 2016, this question gets answered in a panel and the process is really interesting.  They field a movie suggestion from the audience (Goldfinger) and off they go!  The process involved researching previous posters to avoid replication, deciding on an overall design, and then executing several elements individually before combining them for the finished product seen on your right.

And we’re out of here, leaving you with 5 nerdy links. Hopefully they get you caught up on the big stories from nerd culture that you may have missed this week.