Who is Worthy to Wear the Superhero Costume of Thor?

By Clave Jones On Jul 15, 2016 Last updated May 7, 2018
Share TwitterReddItPinterestFacebookEmailPrint

Being a superhero is much more than simply wearing a costume. I mean, I put on a full length rhino costume for my daughter’s 5th birthday party, but that didn’t make me one of Spider-man’s sinister foes.

But while we know a superhero costume doesn’t magically make the superhero, us nerds bicker and moan whenever there is a costume change or when another person begins to wear a costume previously worn by another.

So let’s take a moment to talk about superhero costumes and who is worthy to wear one. Let’s look specifically at Thor. 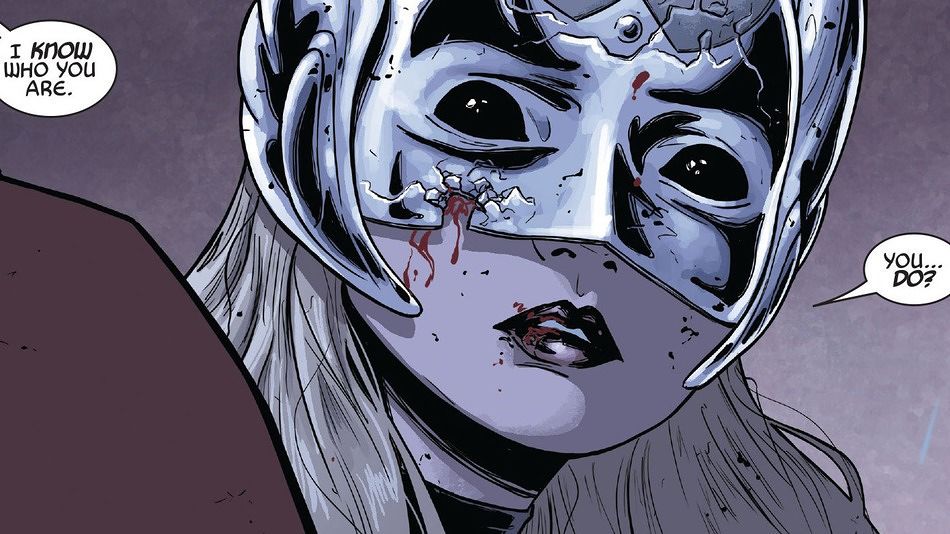 Who is worthy to wear the superhero costume of Thor?

This brings us to Thor. Not just anyone can put on a Thor costume and actually be Thor; there is a process that must be followed to become certain superheroes, few more so than the Odinson, the God of Thunder.

Two different features stand out when we think about the essential nature of Thor:

Now let’s talk more about each of these points, as we can’t have any ‘ole hammer lifter pretending to be Thor. 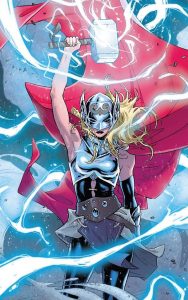 Appropriateness: The aspect of appropriateness speaks to the kind of role that we traditionally associate with superheroes. For one thing, there must be some form of superpower or extraordinary ability accosted with it.

They need to be super. A superhero needs to be extraordinary in some form or other, as it’s right there in the term.

A superhero must also be a HERO under some reasonable description, to distinguish heroes from villains. Thor, in particular is no anti-hero or morally squishy street-level wanna-be. Nay, Thor is a hero’s hero, through and through.

So by appropriate we mean exactly what we would expect to mean by it–a superhero mantle is associated with some extraordinary abilities and some kind of heroism, the reason we call a person a superhero. If you don’t embody that, then it’s not appropriate to call yourself a superhero.

Legitimacy: The issue of “legitimacy” is squishier to specify. But legitimacy can be traced to source or pedigree; the person has to have “earned” the costume, either by creating it or having it be bestowed upon her by someone in authority.

Think of it this way: you can’t just steal intellectual property. You either need to create it or enter into a purchasing/licensing agreement.

Who is worthy to wear the superhero costume of Thor? 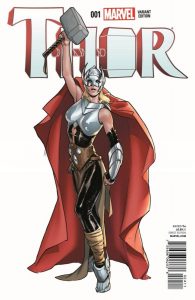 Now we have a theory in place: the “costume theory” that uses appropriateness and legitimacy as its criteria. This will allow us to approach the case of Thor in a bit more detail.

Our goal is to capture the essential essence of what it is to be a superhero, and move beyond the idea that comic book characters need to be frozen in place for all time with no other person ever taking up the costume. (Apologies to Sam Wilson if that metaphor was a little too on the nose.)

Our costume theory says that appropriateness has to do with whether the bearer of the mantle has the right kinds of abilities and whether the bearer is heroic. With Thor, the abilities are a collection of Asgardian physical features, and gifts bestowed upon Thor by Mjornir, the enchanted hammer.

Lady Thor only partially satisfies those appropriateness requirements (not being of Asgardian blood), but adds her own unique character to the mantle, being that she is physically mortal (and ill at that). (Editor’s Note: Read this to catch up on the Goddess of Thunder.)

She also absolutely acts with an appropriate kind of heroism while she wears the mantle. While it is common for a hero to have their unheroic moments, it is important that while they wear the mantle of a superhero, that they actually, you know, be a superhero. They are expected to be heroes and repeated afire on this score puts their superhero status in jeopardy.

Taken all this into account, she passes the appropriateness test easily. 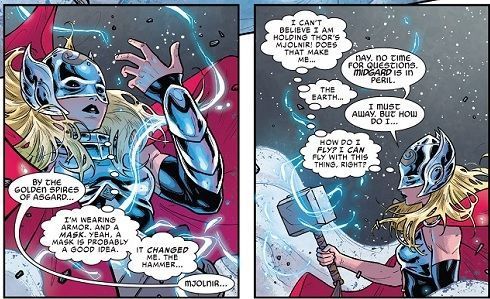 With Lady Thor we see the legitimacy requirement fulfilled in two different ways:

So it’s pretty much a slam dunk on the legitimacy test to wearing the costume of Thor, and it’s noted above that she passes the appropriateness test as well.

While it is understandable that us nerds would be protective of our beloved characters, not wanting to see others in the costume, we can should also understand it there are appropriate and legitimate times when someone us taking up that old familiar costume is actually a very good thing.

So, verily, bring on Lady Thor, Goddess of Thunder.