Who is the Ideal Seventh Member of the Sinister Six?

The members of the Sinister Six are iconic supervillains, drawn from Spider-Man’s rogues gallery.

The Sinister Six has 50+ years of history and has had a least 20 different lineup configurations with a villainous cast that has rotated through dozens of Spidey foes. In fact, for a brief period there was the Sinister Sixty-Six, which was ridiculous even for comics.

But the original incarnation of the group was organized by Doctor Octopus and first appeared in The Amazing Spider-Man Annual #1 in January, 1964. I’m calling those six the official Sinister Six:

But what of those dozens of other villains who have been on the team at one point or another? Which one would be the ideal seventh member of the Sinister Six?

Apologies to Hobgoblin, Boomerang, Trapster, Beetle, and the Chameleon – all very fine villains in their own right – but may I suggest the four villains below as the best candidates to be the 7th member of the Sinister Six. 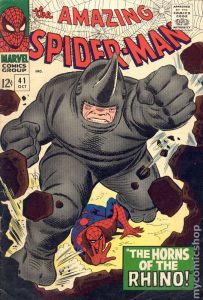 First appearing in The Amazing Spider-Man #41 (October 1966), the Rhino has long been one of Spidey’s popular villains. But membership into the hypothetical Sinister Seven is not like being elected to Homecoming Court.

Gamma ray bombardment provided Rhino with superhuman strength, speed, stamina, and durability. Like his namesake, Rhino is known to charge his opponents, enabling him to deal out massive damage. Rhino is a brawler and would add much needed punch to the Sinister Six lineup.

The Rhino also wears a thick polymer suit that resembles a rhinoceros (duh) and covers his entire body except for his face. The suit is highly resistant to damage and extreme temperatures, and it is also equipped with two horns, designed to mimic the general shape and function of actual rhinoceros horns, capable of penetrating two-inch plate steel. Wearing the suit also allows him to withstand high-caliber bullets, exposure to temperature extremes of cold and heat, falls from great heights, light anti-tank weaponry, and exposure to acids without sustaining injury.

On the down side, like his namesake, Rhino is notorious for not being light on his feet. Indeed, he lacks agility and reaction time. This makes it nearly impossible for him to change direction when running at such high speeds and often causes him to miss his target and collide with the wrong object. Oops. 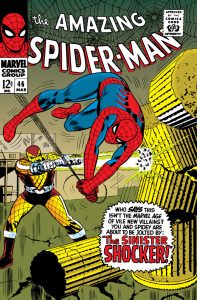 Shocker appeared just a few issues after Rhino in The Amazing Spider-Man #46 (March 1967), so he has his villainous credentials and plenty of experience in being a Spider-Foe.

The Shocker wears a pair of self-designed vibro-shock gauntlets known as “vibro-smashers.” Shockers gauntlets are activated by a pump-action thumb trigger and can project a concentrated blast of compressed air that vibrates at an intense frequency and result in powerful impacts.

Holding the thumb triggers down for an extended period of time increases the intensity, speed, and even spread of the air blasts. Shocker can effectively throw long range vibrational punches, creating destructive vibrations that can crumble solid concrete or launch a foe. The gauntlets also allow Shocker to make incredible leaps by directing the air blasts toward the ground in front of him.

To guard himself from the vibrations of the gauntlets, Shocker developed a quilted costume to absorb the shock.  It is made of foam-lined synthetic fabric which absorbs all vibrations, deflects normal blows, and allows him to slip from any grasp. He’s wrapped in Charmin, in other words. 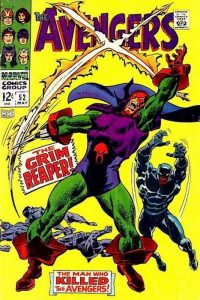 Grim Reaper first appeared in The Avengers #52 May (1968), so he hasn’t been limited to battling Spider-Man only. Grim Reaper’s power set also forks in two distinct ways, so depending on your villainous preferences, Grim Reaper may or may not be the Sinister Six’s cup ‘o tea.

Grim Reaper Option 1: Grim Reaper was originally a purely tech-based villain. His trademark scythe was designed by the Tinkerer, worn on his right hand, and had the ability to spin at rapid speed, making the weapon usable as a high-speed propeller blade buzzsaw, missile shield, and an improvised helicopter.

The scythe could also fire power blasts or gas pellets, plus dispense electric stun shocks on touch. The scythe was also equipped with a sound generator able to induce deep comas in victims. All of this was tech-based, which blends nicely with the tech-based Sinister Six.

Additionally, Grim Reaper’s right hand was amputated and replaced with a magical scythe,  capable of energy blasts (much like the original), but given the additional ability to drain energy.

On one hand, a magical member of the Sinister Six would give them a broader element, but on the other hand, Grim Reaper option 2 would stick out like a sore thumb. 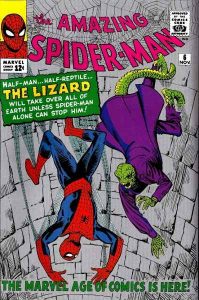 First appearing in The Amazing Spider-Man #6 (November 1963), Lizard has the most street red of any on this list.

In short, the Lizard is lizard-like. As a result of exposure to chemicals, Dr. Curt Connors mutated, giving him the ability to transform into the Lizard. Like any reptile, the Lizard has cold-blooded characteristics, making him sensitive to drops in temperature. But that’s about it in terms of downside.

His strength is increased to superhuman levels. Likewise, his speed, stamina, agility, and reflexes are also raised to a level equivalent to that of Spider-Man. He can scale walls using molecular friction not unlike a gecko lizard.

Lizard is resistant to punctures and lacerations from ordinary weapons or low-caliber firearms due to his thick scaly hide. He has highly enhanced healing abilities which allow him to quickly recover from grievous wounds, including regenerating lost limbs.

Offensively, he has a powerful tail with which to whip opponents. He also has razor-sharp teeth and muscular jaws that can deal a lethal bite. Finally, the Lizard can mentally communicate and command reptiles within a mile of himself via limited telepathy.

This adds up to make the Lizard a very worthy seventh member of the Sinister Six.

Thanks so much for reading. If you’ve enjoyed Nerds on Earth, please do us a solid and help us spread the word by using the social media buttons just below.