How much was young Peter David inspired by real life NYC events?

By Jason Sansbury On May 29, 2018 Last updated May 28, 2018
Share TwitterReddItPinterestFacebookEmailPrint 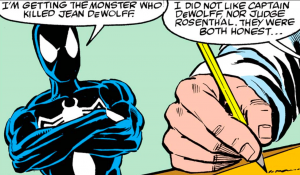 On December 22, 1984, Bernhard Goetz was approached on a New York City subway and–in what he claimed was an example of self defense–Goetz shot and wounded four young men. The case was an immediate national media focus, with Goetz being dubbed the “Subway Vigilante” by the media and the case created a racial firestorm as Goetz, a white man, shot the four young African-American men on the subway.

There is no doubt that this case started simmering in a young Marvel writer and became the story known as “The Death of Captain Jean DeWolff”. 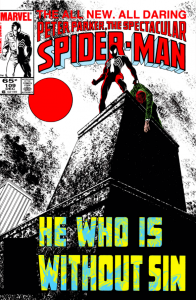 The Spectacular book tended to lean more towards street level, gritty stories, often playing out tales of New York’s gang scene or pairing up Spider-Man with partners like Cloak and Dagger as they faced down the drug war. Set in the time of the book, New York was a crime mecca and the clean-up of areas like Time Square wouldn’t come for at least another decade. So, the writers that Marvel hired would no doubt be impacted by what they saw around them.

Peter David was one such writer and, astonishingly, The Death of Jean DeWolff is his second professional comic book writing gig. While David is now regarded as a great comic writer and you can imagine that a pitch from him will garner significant attention, it is hard to imagine that would be the case in late 1984 and early 1985, when these comics were being put together. But it says a great deal about the complexity and power of the story that David wanted to tell. 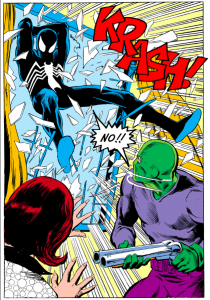 The storyline deals in equal parts with a variety of ideas and how they all intertwined together. Over the course of the 4 issues, the main ideas about vigilantism, the justice system, safety, firearms and superheroes are all connect. The main thrust of the narrative is that a masked man named the Sin-Eater has gone around and begun to kill those who he thinks have done some sinful, unjust activity.

DeWolff is the first casualty and the next one is a judge, who turns out to be a friend of Matt Murdock. (One of the fascinating things about this book was the way that superheroes did not know one another’s identities. In modern comics, it is such a given that we forget for a long time, guarding your alter-ego meant even not sharing it with potential allies. Also, neither of these characters at this point had been a part of a major hero team.)

In an effort to be spoiler-free, I don’t want to give too much away. The story is great though and works well in issue form and also as a one time purge through. There are dramatic moments and twists that really still work, even for a modern audience and it plays well. Honestly, if whoever is in charge of Spider-Man movies hasn’t looked at this as an idea for a darker eventual sequel, they are really missing out on an opportunity, as much of this story would work really well as a suspenseful movie. 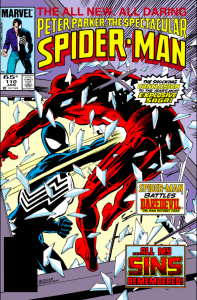 That isn’t to say that the story is perfect. We do get the timeless “hero versus hero” work a couple times as Spider-Man and Daredevil wind up on opposite sides of arguments, both in theory on how the justice system should work and in practice on how it all plays out. The villain of the story is the aforementioned Sin-Eater but also a justice system that is letting people down, most notably an elderly male renter at Aunt May’s boarding house, who winds up being important in the last part of the story especially, as a stand in for Goetz almost.

All in all, it is obvious why The Death of Jean DeWolff stood out at the time of its publication; it was a comic book world reflection of real world circumstances that people were genuinely torn about. To today’s readers, there are some parts that should give us pause. It is hard not to read the story through the lens of DeWolff as being “fridged” to move Spider-Man along, even though it was written well before that criticism and idea existed; and there are some parts about an African-American pastor that just play a little hollow unless you understand better the dynamics around the Goetz case in the real world.

But that shouldn’t dissuade you from reading the story, which is on Marvel Unlimited as well as being available in a collected version that is out of print and available on Comixology and the Kindle app.