We look at the history of Vancian Magic.

By Clave Jones On May 21, 2018 Last updated Jan 23, 2021
Share TwitterReddItPinterestFacebookEmailPrint

If you flip to Appendix E of the Player’s Handbook, you’ll discover this among the works that have inspired Dungeons and Dragons:

Vance, Jack. The Dying Earth and The Eyes of the Overworld.

Jack Vance was an American mystery, fantasy, and science fiction writer who died in 2013 at the distinguished age of 96. During his career he won the Nebula Award, the Hugo three times, and a Jupiter, among others, and in 1984 was awarded a literary award for lifetime achievement. The New York Times called Vance one of America’s “undervalued voices.”

“Undervalued” is an apt way to describe Jack Vance’s influence on Dungeons and Dragons, as his thumbprints are all over the magic of D&D, yet few people realize why. The following paragraph is from The Dying Earth:

The tomes which held Turjan’s sorcery lay on a long table of black steel or were thrust helter-skelter into shelves. These were volumes compiled by many wizards of the past, untidy folios collected by the Sage, leather-bound librams setting forth the syllables of a hundred powerful spells, so cogent that Turjan’s brain could know but four at a time.

[…] Then he sat down and from a journal chose the spells he would take with him. What dangers he might meet he could not know, so he selected three spells of general application: the Excellent Prismatic Spray, Phandaal’s Mantle of Stealth, and the Spell of the Slow Hour.

Magic is such an integral part of D&D and so ubiquitous that we take for granted how it works. But it’s a system so solid that it’s endured for over 40 years: 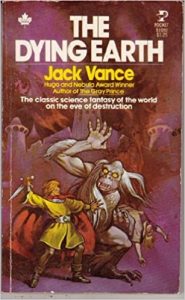 Now think about that system and then re-read the passage from Vance’s book. It’s all there! That’s because when Gygax and Arneson were designing D&D, they needed a system to handle magic. Their inspiration was directly from Jack Vance’s The Dying Earth, which is why the now ubiquitous magic system used on most RPGs is called Vancian Magic.

When designing the “game” part of roleplaying game, magic needed framing up. They had a huge hole in terms of magic rules, and Jack Vance, fortunately, offered a round peg. Vance wrote about magic as if it was powerful, and even included the line “that Turjan’s brain could know but four at a time.” Well, Gygax turned that line into spell slots and wizards could earn more of them as they leveled up.

But the important thing was Vancian Magic creates a limited well. Further, you’d need to learn your spells. Jack Vance described the process of spells in a journal, which became a spell book in D&D. And just like Turjan, the hero of Vance’s novel, D&D wizards need to memorize them each day, so you better choose some with utility, like maybe the Prismatic Spray, better known as Color Spray in the Pathfinder system, one of the most omnipresent low level spells.

And the magical spells get more powerful as the wizard advances in level. Whereas a 1st level wizard can’t do much more that cause a candle to flicker, a higher level wizard can bend the entire fabric of reality with a wish spell. In fact, the leveling of a wizard’s power has been given a name and charted on a graph: “Linear Warriors, Quadratic Wizards.”

Again, the Vancian Magic system of D&D (and other games like Skyrim) has endured for four decades, and we can thank Jack Vance for unwittingly inspiring it.

One final thing about Jack Vance. He was diagnosed with glaucoma in the 1980s and declared legally blind. Yet he continued to write with the aid of dictation software, bending the reality of what was thought possible, just like a good wizard would do.