What is your favorite take on Frank Castle?

By Brandon Morgan On May 23, 2018 Last updated May 23, 2018
29 TwitterReddIt29PinterestFacebookEmailPrint

Frank Castle. The Punisher. He’s one of those characters that you either love or hate. Many find his antics as the paladin of punishment to be one-dimensional or even a harmful reflection of our violent society. Others see him as justice unbridled, the id writ large of a society that craves reparation and revenge when the authorities fail to do so.

Much like this dual-reception of the character, Marvel has recently had a couple of versions of the Punisher occupying shelf space at your local comic shop: Punisher and Punisher: The Platoon. The disparate versions of Frank Castle present in these two titles couldn’t be more different.

The main Punisher title finds Frank in full superhero mode, as he comes into possession of the War Machine armor. Over in Punisher: The Platoon, the story takes us back to the jungles of Vietnam where we find a young Frank Castle on his first tour of duty.

This isn’t the first time Marvel has had a Punisher tug of war. Not since 2010 have we seen such contrasting views of Frank Castle. Then, two titles were duking it out for the soul of Frank Castle. At that time, Franken-Castle presented us with a much  more farcical version of everyone’s favorite vigilante as he tussled with the Marvel heroes of the day in the Dark Reign (remember that?), and was literally transformed into Frankenstein’s monster. On the mature rack at the comic shop of 2010, one could find Punisher Max, the gritty direct sequel to Garth Ennis’s classic Punisher run under the Max imprint, where Aaron gave us a send off to the old school, original version of The Punisher.

Let’s look at what each of these dueling visions of the Punisher can reveal about the character.

Let’s hop into our mental time machines and go back to the bygone era of 2010. Marvel of 2010 was an 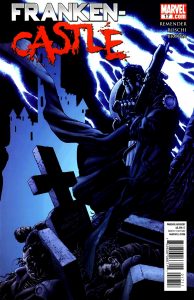 interesting place. Marvel began the year by being rattled by the shocking aftermath of the Dark Reign event, where Norman Osborne had taken over SHIELD and had turned it into HAMMER. I’m sure you fondly remember all of the internet-shattering twists and turns that no doubt still reverberate through the stories today. Ha, just kidding. None of the “changes” made during this series are terribly relevant today. That’s just the Marvel way in the 21st Century!

2010 found the Punisher of the Marvel Universe at war with Norman Osborne and the various baddies, including Daken, Wolverine’s son. In fact, writer Rick Remender had poor Frank dismembered by Logan’s spawn. This could have been an ignoble end for Frank, but it’s comic books. We can’t have a straightforward death. That wouldn’t be proper!

Instead, thanks to the machinations of Morbius and the Legions of Monsters, Frank returns as Franken-Castle. You see, Frank’s always been a monster, but now he’s literally a monster! Get it? Subtle, it wasn’t. Hijinks ensued. The gonzo adventures of an undead Punisher were kind of fun from a bonkers reading perspective, but it didn’t feel like Punisher. It seemed like Remender and Co. bought into the idea that Punisher wasn’t interesting in and of himself. He needed something more, something… undead?

At times, writers have tried extreme tactics to turn the more grounded Punisher into a new, more interesting character. This view that Punisher needs to be fixed to make him more interesting is flawed, leading to some pretty freaky stories. Looking at Punisher’s history, readers can find bizarre examples of Punisher becoming a criminal, an angel/demon hybrid, or even becoming an African American (who, of course, must immediately team up with Luke Cage now that he’s going around in black face). These attempts to make Punisher a square peg that fits into a round hole always seem to fail. Not only does it not work with the character, it feels cheap. It’s as if it’s not good enough to have someone with little powers operate in the Marvel Universe. 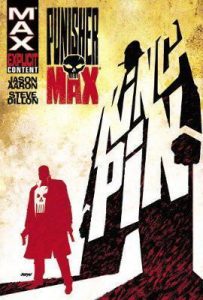 Also starting in 2010, Jason Aaron brought traditional Punisher fans something more akin to what they expected from the character, a direct sequel to the insanely popular Garth Ennis Max series. While PunisherMax (or Punisher Max, because the lumped title just looks dumb) brought the grittier, mature-audiences-only Punisher back, it also introduced Kingpin, Bullseye, and Elektra. Punisher Max brought a grounded take to some traditional Marvel baddies, while also acting as a goodbye to the Vietnam-era character, who is killed off in the end.

Punisher’s eventual death was a striking moment for the character. As the years have moved on, it had become less plausible to have a young Vietnam vet running around the Marvel Universe. The Max title gave Marvel the chance to tell one last story for that original Punisher character, allowing them to move on to a soft reboot for the Punisher, who is now a Iraq/Afghanistan War veteran. It was a fitting goodbye to that character and a worthy successor to the definitive Ennis run.

It was a jarring experience reading both takes on Punisher at the time. There couldn’t have been more differing views on the character, a striking contrast between the cartoonish buffoonery of Franken-Castle and the ultra violence of Max. The former fails to deliver anything memorable, while the latter gives us a solemn reminder of the ultimate consequence of Frank Castle’s war on crime.

And now we find ourselves in the present, post-Netflix Punisher world. The Netflix series and his previous appearance in Daredevil Season 2 allowed for a fuller, less one-dimensional exploration on Punisher in a way that the previous three movies had not been able to do so. Yet again, two different titles gave us wildly distinctive takes on the character. 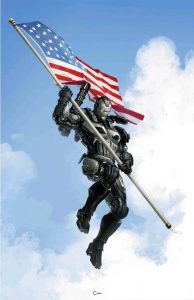 Punisher – War Machine follows along the Franken-Castle strand of thought that Punisher isn’t interesting on his own. In the series, Punisher (with the help of Not-Nick Fury, but they call him Nick Fury) gets his hands on the War Machine armor. Hijinks ensue again, but with satisfying results. Unlike Franken-Castle, the change represented in this current series makes a peculiar kind of sense.

Frank Castle has always been about weaponry. Why wouldn’t he be interested in getting his hands on some of the most lethal tech in the world? After obtaining the armor, a very Jon Bernthal-looking Frank makes his way to another foreign war zone, this time to the fictional nation of Chernayya, to take down some rogue SHIELD Agents who are fomenting political discord.

Sure, Punisher being souped up on high tech seems to run counter to the Punisher traditionalists know and love, but it’s made for some pretty awesome storytelling. As this arc ends and the inevitable reboot is on the horizon for August (with a promise to return Frank to a back to basics take), War Machine has been a nice diversion. Taking Frank out of his element seldom works, but War Machine achieves a satisfying story by not radically changing who Frank is by putting him into some new clothes.

A similar “take Frank out of his usual urban crime element” story played out in The Platoon. This miniseries finds 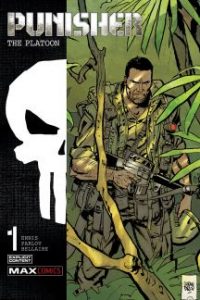 Garth Ennis returning to his favorite era of Frank Castle’s tragedy, the Vietnam War. Ennis isn’t a stranger to this take on Frank. His Born Max miniseries is a definitive origin of who Frank castle is, as he clearly makes the case that Punisher wasn’t born the day his family was mowed down. Vietnam created the killing machine. His family’s death just provided the opportunity to unleash the bad man created in the southeast Asian jungles.

In The Platoon, we find Frank as a green behind the ears officer serving his first tour of duty in Vietnam. Frank has to suss out the politics and bureaucracy of the battlefield, both with the enemy and those Americans in charge of the quagmire of the Vietnam War. It presents a Frank who is just starting down the path of disillusionment and violence. It’s a raw take on the character, and worth a read from anyone wanting to see Frank as a person rather than a killing machine. It’s an interesting view of a character who is being unleashed in War Machine to do as he pleases, while The Platoon shows us a Frank who is committed to protecting his fellow soldier.

Can a violent man such as Frank ever show restraint? These two series give us differing views on the topic, but they are more similar to each other than the dueling visions from 2010. In 2018, the two Punishers are both men on the battlefield struggling with the eternal problem: do wars prove who is right or do they simply provide the deadly calculus for who lives?