Fight like a Jabari with a custom weapon based on M'baku's staff from Black Panther.

By Michael Adkins On May 24, 2018 Last updated Aug 29, 2019
Share TwitterReddItPinterestFacebookEmailPrint

When M’Baku showed up to participate in ritual combat with T’Challa on Challenge Day, he came armed with a large wooden staff and proceeded to lay the beat down on the king of Wakanda before T’Challa rallied and forced M’Baku to submit.

Something struck me as I watched the combat unfold: M’Baku’s staff dealt out bludgeoning and piercing damage.  I wondered then if what he wielded had a real life equivalent or source of inspiration, and I was not disappointed.

M’Baku’s weapon of choice is somewhat modeled after a knobkierrie.  From the Afrikaans word knop meaning “knob” or “ball” and the Khoekhoe word kierie which means “walking stick,” the knobkierrie is a weapon with deep African roots.  This makes it a great fit for the aesthetic and cultural nods that saturate Black Panther, for sure. 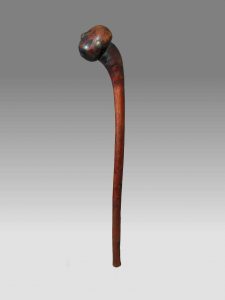 The knobkierrie is a single piece of hardwood traditionally somewhere between 2ft-4ft in length and terminated at one end with a large bulb or knob.  A piece of wood sizable enough to accommodate the desired circumference of the knob is selected and whittled down to form.  No seams or joints here!  It can be wielded as a melee weapon or as a ranged weapon, with the latter typically resulting in an end-over-end hurl aimed at the head of either the enemy combatant or the animal dinner en potentia.

They are also carried as a symbol of office; something else true to the design of M’Baku’s staff.  The rest of the Jabari warriors appear to be equipped with wooden spears.  M’baku’s weapon clearly sets him apart as the ruler of the Jabari tribe.  His doesn’t seem to be terribly ornamental though, whereas many knobkierries that are used strictly or primarily as symbols of office can showcase ornate carvings and imagery significant to the culture or tribe to which it belongs. 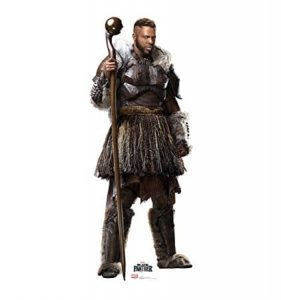 But this is where the similarities begin to taper off in some interesting ways.  M’baku’s staff is clearly in excess of the traditional length of the knobkierrie.  Winston Duke, the actor who portrays M’Baku, stands at 6’4″ which places the staff somewhere in the 6ft range I’d guess.  That’s well beyond a length suitable for throwing, I’d say, and he never does so during the course of the movie.  It does, however, give him a noticeable reach advantage over T’Challa’s load out.

Another peculiarity about his staff is the piercing damage I mentioned earlier.  Knobkierries were strictly blunt weapons as best I can tell, yet M’Baku definitely uses it to jab T’Challa during the ritual combat for the crown.  That’s some nifty versatility.  Also noteworthy: M’Baku makes no move to jab with the pointed end of his staff until he managed to separate T’Challa from his shield.  Until that happens, it is bludgeoning all the way.

Bringing the Knobkierrie to Your RPG Campaign

The Pathfinder RPG system already has a stat block for a knobkierrie listed in the Ranged Tactics Toolbox.  A small one deals 1d4 while a medium one metes out 1d6, both with a listed range of 20ft and dealing strictly bludgeoning damage.  It also has the special property that if you’re proficient with it, you gain a +1 bonus on ranged attack rolls against opponents using bucklers, light shields, and heavy shields.

However, if you wanted to bring M’Baku’s staff to your table, you might mix things up like this in light of the ways it differs from the traditional knobkierrie:

You can also work the staff as a symbol of office into the backstory of the character you roll up to wield it.  What office does he or she hold and where?  What ornamentation or symbolism adorns it?  You could even go so far as to change the material of the weapon itself from hardwood to something a bit more exotic for flavor’s sake if you’d like.