By Brandon Morgan On May 25, 2018 Last updated May 25, 2018
Share TwitterReddItPinterestFacebookEmailPrint

There’s something about the end of the world that speaks to a horrifically visceral experience that none of us wants to live through. It lets us explore a future that should scare the bejesus out of us from the confines of our couch, movie theater, or gaming table.

SaltLands from Antler Games is a survival board game that allows its players to tackle the end of the world in an attempt to find paradise.

The best elevator pitch that fits this game is that SaltLands is Mad Max: The Board Game. Still with me? Good.

The game supports up to six players. The story of SaltLands is that some unnamed catastrophe (I’m going with aforementioned Trump Administration) befell the Earth, leaving a dried out, salty husk of the world. The game takes place in a parched landscape filled with sand dunes and rocky mountains at the bottom of what was once an ocean. Players must follow rumors around the map searching for one of three oases that will give players respite from the harsh realities of the SaltLands. Of course, there are raiders roaming about hoping to relieve you of your goodies and your life. 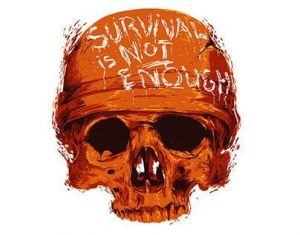 SaltLands comes with an assortment of map tiles and tokens that help layout the terrain and valuable resources players need to navigate the deadly landscape. There are also various cards that provide resources, victory conditions, AI support and stats for raiders, and changes in the weather.

Player mats come for each of the six different characters, each giving the player different advantages to exploit in the Wasteland. The one thing it doesn’t come with is a nifty cheat sheet for all the symbols. There is one in the back of the book, but the game’s first expansion does come with individual cheat sheets for players (a few more characters too).

Ah, the rulebook. A few somewhat irksome issues are present at basic setup, each dealing with the rulebook itself. The print in the rulebook is super small. I don’t wear glasses as a fashion statement. I’m blind. The print in the rule book is needlessly small. There’s lots of fantastically atmospheric white space on the page, but it doesn’t serve the game any favors by making the print so small. SaltLands also promises a language neutral game. None of the cards have text. The game depends heavily on interpretation of icons on the cards.

So, not only is rulebook hard to read, but the cards also provide little written guidance. These two issues led to some frustrating gameplay at times. There’s extra frustration involved as well because the rules don’t have many examples of play. I had to run to YouTube to make sense of the game because of the reading issues and the lack of detail. That made for some interesting (read: deadly) gameplay. 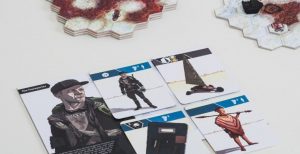 SaltLands has several different game modes to play and try out. The numbers of players obviously impacts gameplay, but beyond that players can select difficulty and play style. Options include tutorial, solo, cooperative, and competitive modes. The variety of game modes and difficulties gives players several reasons to return to the SaltLands. I played on Solo mode, but I can see how adding more players could be beneficial.

Much like I found out with the Fallout board game, solo mode is tough! All Raiders zeroing in on your location does not equal a fun experience. Despite having an easy mode, it’s insanely easy to die early on this game. I was literally killed several times on my first round because of bad drawing when it came to raiders. Though I enjoy the post-apocalypse, I’m obviously not well suited for it.

Players take turns navigating the wastes. Initiative is determined by… who has gone the longest without a drink. Neat!  Players can do any number of actions including moving, activating tokens for resources and crew, and running down those pesky rumors of the promiseland. The more resources available to you, especially the number of crew members you have on your landsail and/or vehicle, the more you can do on your turn.

While avoiding raiders, as more and more spawn on each of your turns, it becomes increasingly hard to avoid conflict with them. To encourage conflict, beating raiders improves your gear and gives you the possibility to ditch your landsail and upgrade to a motorized vehicle.

To gain victory in the game, players must meet the conditions for victory dependant on the number of players. On solo mode, I had to get two victory cards, one corresponding to the color I chose (green, blue, or red), plus one other of any color. I never won. I came very close on my final playthrough, but the raiders between me and victory were just two much. Even on easy mode, solo players are activating three raiders each round and potentially adding up to three more on the board. Each game lasts six rounds… yeah, do the math. I was screwed. 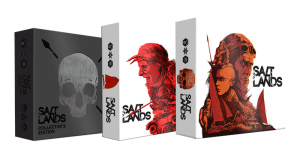 There’s a great game hidden inside SaltLands if one is willing to take the time and effort needed to break through the density of the game. And it will take time and patience. And YouTube. Definitely YouTube. Some games do take a little more to get into than others. This isn’t a game for casual players more accustomed to Catan or Ticket to Ride. This is a deep nerd cut that rewards the patient player.

I don’t believe playing solo gave me a complete view of the game, but I can see that playing with others would definitely give your character more room to breathe. Or, you know, not die as frequently as I did. Despite a few frustrations, I did like the game immensely. Interpreting the game’s iconography takes a bit of practice, but having the cheat sheet from the expansion does help with the learning curve. Prospective players should go ahead and buy the expansion along with the main game. The expansion doesn’t radically alter the game, which might be disappointing to some because it really is just more of the same game.

Bring the Hyborian Age to Life With These Conan Tabletop…