By Brandon Morgan On May 10, 2018 Last updated May 8, 2018
Share TwitterReddItPinterestFacebookEmailPrint

What was the last bonkers, out of control, “this can’t really be happening” comic book that you read?

Ugh, you said Deadpool, didn’t you? In today’s comic book world, when readers think about whacky characters or gonzo comic book concepts, the discussion unfortunately begins and ends with Deadpool. I would argue Deadpool’s appeal is due to a “he breaks the fourth wall” schtick than it is truly committing to a kooky or mind bending concept. Regardless, there is a serious lack of risk taking in the comic book industry as a whole, especially when you consider how few books from the Big Two try anything new, inventive, or fun.

That’s why I have to give DC major props for trying something as insane as The Kamandi Challenge. The twelve-issue miniseries was released throughout 2017, and a new hardcover collection of the bizarre series was released back in April. The series features a creative approach to producing a comic book. 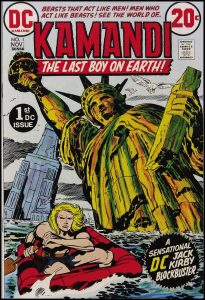 The Kamandi Challenge may be crazy, but that’s no accident. The original series was completely bonkers too!

Too many Marvel Zombies remember Jack Kirby for his Marvel work exclusively, while never really paying any attention to his DC work. That’s a huge mistake! Kirby bolted for DC in 1970, where he created many memorable characters such as The Demon, OMAC, all of the various Fourth World titles, and Kamandi.

I hadn’t read much Kirby until a few years ago. I had read some of the early Fantastic Four, but it wasn’t until Marvel started shafting their first family that I decided to take the hard dive into the original Jack and Stan run. During this time, I never gave his non-Marvel work a serious look. That is until I attended a Jim Shooter panel at HeroesCon last summer.

Shooter was conducting a panel on comic book composition, and he was using Strange Tales #114 as his example. The issue features a great Lee & Kirby yarn about the “return” of Captain America before the actual return of Captain America in Avengers #4. It’s a hokey, but fun read. Shooter offhandedly mentioned during the panel that he loved Kamandi and that we should check it out. Controversial he may be, but I still listen to Jim Shooter because he was Editor in Chief during a time that there are an awful lot of Marvel projects that I still love today.

I checked out the first ten issues of Kamandi on Comixology. I was blown away!

Created by Jack Kirby for DC in 1972, Kamandi features the adventures of the last boy on Earth, which has befallen a great cataclysm. Kamandi’s world bears more than a passing resemblance to Planet of the Apes, but instead of just apes inheriting the world after some unnamed disaster, the whole zoo is on display with humanoid lions, tigers, gorillas, goats, and all other animal assortments. Oh, and most of them are armed with guns. The original series ran for 59 issues, with Kirby working on the first forty issues.

Readers wanting to take a dive into the deep end of the Kamandi pool are in luck! DC just released an omnibus of Kirby’s full run on Kamandi back in March. It’s well worth anyone’s time to seek out.The original Kirby run is full of energy and fun. 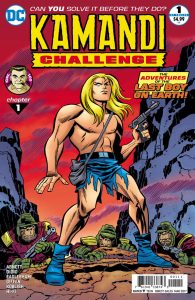 The boldness of such a concept is refreshing in this era of comic books. Too many comics are focused on the cult of personality surrounding the particular creative team of the book.The Kamandi Challenge subverts those expectations by having a rotating cast of creative teams tackling an issue at a time.

The creative talents behind the book are impressive. Each issue’s pairing of creators were tailored to deliver maximum fun. You can check out a list here of each issue’s creative team, but I was blown away by some of the choices.

One complaint readers have of modern comic books is the slow, graphic novel ready pacing many stories have. Given the nature of the trade paperback market, many stories take their time, patiently laying out the story like a novel or movie. Many fans simply want a comic that delivers action without the navel gazing.

The Kamandi Challenge suffers no such glacial pacing. True, the cliffhangers always provide a jarring amount of fun, but the events of the actual issue are also fast and unpredictable. Readers will figuratively get whiplash from bouncing back and forth from page to page. Charting out all of the things that happen in one issue would surely surpass anything that’s happened in a Spider-Man or Batman book in the last year. The high octane action of this comic puts it on an entirely different level than anything else on the shelves currently.

But does that make for a satisfying reading experience? Yes and No. This sort of book is highly unusual. The Kamandi Challenge is the quintessential definition of an “A for Effort” project. The concept is so off the cuff that it deserves to be highlighted. Comics should have more aspirational experiments like this. High risk, high reward… correct? 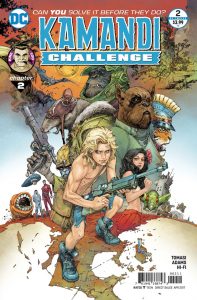 Rewarding reading is highly subjective. I’m not going to lie, the unorthodox nature of the book does lead to a disjointed feeling from time to time. The quality of the writing is all over the place. This book is flat out crazy. The concepts of some issues land better than others. Some issues feature so many scene changes that it would be fun to chart out what is going on, while others are relatively stationary. In fact, the Tom King issue takes place in a single room. If readers aren’t having multiple WTF moments each issue, they have probably picked up the wrong book. That can be good or bad depending on the reader. I enjoy eccentric comic books. This isn’t going to be remembered as the next Watchmen, but not every comic book should aspire to do so. Readers who like similar experimental concepts will find much to love about The Kamandi Challenge.

Without giving any spoilers, the ending does finish on a “meta” note. Satisfaction is not guaranteed! Not everyone will be a fan of such an ending, but it will please audacious readers looking for something unique. A story that is so unconventional was never going to finish with a neat, tidy bow on top. The Kamandi Challenge ends with one final quirky twist that honors and celebrates Kirby’s creativity. It is a touching moment that honors the man and his work perfectly.

My hope is that this kind of creative project will be given the greenlight more often in the future. Comics shouldn’t be boring. Kamandi, both the original and the one featured in The Kamandi Challenge, is never a humdrum reading experience! Doing fun, wildly different takes such as this should be the norm, not the exception! I also hope that this series will lead to an honest revival of Kamandi. DC has put this off for years. The world of Kamandi is a lush place, well deserving of more exploration and discovery.

Adventurous readers should take the time to explore the insane world of The Kamandi Challenge. One thing is guaranteed: the curious will not be bored!

Thanos and the Great Malthusian Imperative